Wasp Stung By Lack of Lubrication

An accident involving civil registered ex-military Westland Wasp HAS1 G-KAXT on 23 September 2016 highlights the importance of a thorough review of an aircraft’s maintenance programme when there is a major change in role or utilisation. 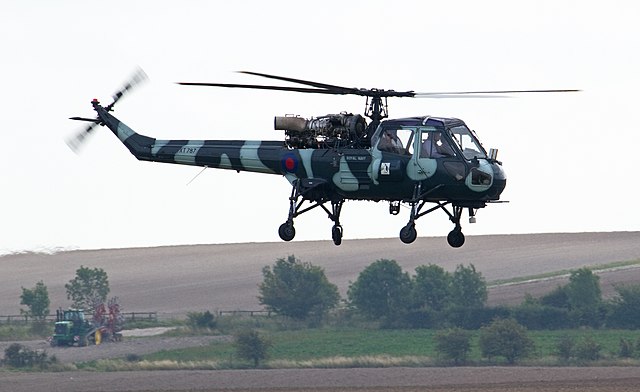 G-KAXT was delivered to the Royal Navy in February 1967 with the UK military registration XT787. The helicopter was transferred to the Royal New Zealand Air Force (RNZAF) in 1982, where it remained in service until May 1998. It was acquired by a private owner in 2000 at approximately 2,660 flying hours and registered as G-KAXT.  It had accumulated a total of 3,012 flying hours and was operating on the UK civil register with a valid Permit to Fly.

The helicopter was maintained in accordance with the Ministry of Defence (MoD) Master Maintenance Schedule (MMS), reference AP101C-0601-5A1; this was a condition of the CAA approval for the Permit to Fly.

The manufacturer advised that typical usage for the Wasp helicopter in UK military service was in the order of 200 hours per year, which would equate to a gearbox overhaul calendar period of approximately three years.

The AAIB explain that while en route from AAC Middle Wallop to RNAS Yeovilton on 23 September 2016:

Southwest of Salisbury, at approximately 1,150 ft and 80 kt, the pilot felt a two to three second vibration in the collective lever.

Shortly thereafter, the pilot realised that he no longer had collective pitch control, so he turned away from rising ground in preparation for a diversion to a landing site in the Chalke Valley.

The pilot made a PAN call and informed Air Traffic Control (ATC) of his intention to land as soon as possible. He was offered diversionary airfields, but with increasing concern over the ability to control his altitude he decided to land in a field near the village of Bishopstone.

After a slow speed handling check, he initiated his final approach and selected manual throttle control at a height of approximately 300 ft. His ability to flare was limited and he was unable to cushion the landing, with one wheel touching down first and significant bouncing between all four wheels as he shut the helicopter down.

The tail rotor struck the ground but the helicopter remained upright and both occupants, who were uninjured, were able to exit normally.

AAIB established that the collective pitch control rod in the main rotor gearbox had broken.  The failure occurred in an area where the rod passes through an aperture in a metallic ‘guide’ (by design, the rod should not touch the guide say AAIB). The exposed bearing surfaces of the trunnion showed extensive corrosion and wear. The evidence indicated that that the universal joint had been operating with insufficient lubrication for a considerable period of time.

There are no requirements to lubricate the universal joint in service.

The pilot had reported vibration in the preceding months but despite diagnostic efforts, the cause had not been identified.

The much lower utilisation in civilian operation, and the absence of a calendar time limit for main rotor gearbox overhaul, meant that the gearbox in G-KAXT had been installed for 20 years since previous overhaul.

The universal joint had not been replaced in this time and there was no requirement to lubricate it in service. The lubricant in the joint was lost over time, causing the joint to wear and corrode, leading to its eventual failure. The introduction of calendar-based time limits, where appropriate for the aircraft utilisation, would help to prevent similar failures in the future.

The Civil Aviation Authority (CAA) issued Emergency Mandatory Permit Directive No 2017-002-E, applicable to UK-registered Westland Wasp and Scout helicopters, to perform a visual check of the condition of the universal joint and introduce periodic lubrication of the joint.

One AAIB Safety Recommendation has been made to the CAA:

Safety Recommendation 2017-012 It is recommended that, for ex-military aircraft on the UK civil register, the Civil Aviation Authority requires maintenance and overhaul tasks to be reviewed in the light of the expected aircraft utilisation and calendar-based time limits introduced where appropriate. Where such calendar-based time limits already exist, these should be reviewed to ensure that they are appropriate for the aircraft utilisation.

The CAA accepts this Recommendation.

CAP733 Permit to Fly Aircraft, provides supporting guidance which states “The maintenance schedule for the aircraft will need to be reviewed and amended to take account of the utilisation and type of operation. The flying hour related tasks may need to be converted to appropriate calendar periods.”

In order to reinforce the regulatory requirement(s), the guidance material currently published in CAP733 will be incorporated into CAP553 by February 2018.

Additionally, we will review organisational and operator competencies to assure ourselves existing programmes are reviewed and are appropriate for the aircraft utilisation. We will achieve this through our routine surveillance of approved organisations and operators and individual aircraft surveys, together with our planned airworthiness liaison forums.

The investigation revealed that during the flight, the pilot lost control of the helicopter as a result of the damaged tail rotor driveshaft pinion which did not provide a direct drive to the output shaft of the tail rotor gearbox. This resulted in the tail rotor failure, which caused the helicopter to spin uncontrollably before impacting the ground.  Inspection of the tail gearbox did not reveal any signs of oil in the interior of the housing, an indication that there was insufficient oil prior to the accident.

The accident helicopter had not been actively operating for many years and it had also not been complying with the manufacturer’s requirements nor the SACAA preservation storage instructions for aircraft that had not been in service for a lengthy period.  Between March 2012 and July 2018, the helicopter had flown a total of 10.90 hours… In February 2017 the AAIB reported on a control restriction, that resulted in the crash of Westland Scout AH1, G-BYRX near Ruddington, Nottinghamshire, 29 December 2015.

While hover taxiing for takeoff, the pilot reported that the helicopter suddenly pitched nose-up and as he was unable to regain control he lowered the collective allowing the aircraft to descend to the ground where it rolled onto its side.

The investigation was unable to establish the reason for the loss of control, but it is possible that there was a restriction in one of the flying control servo-jack control valves leading to higher control forces required to control the helicopter in the hover.