In 2016 UK company Martin-Baker Aircraft celebrated the 70th anniversary of the first in-flight ejection with one of their ejection seats.  On 24 July 1946, Martin-Baker’s Bernard Lynch successfully ejected from the rear cockpit of a specially modified Gloster Meteor F3 at 320 mph IAS at 8000 ft as part of development testing.

Newsreel Footage of an Ejection From a MB Trials Meteor

Lynch had made the first ground test 24 January 1945 and made 30 test ejections in total.

The first emergency use of a Martin-Baker seat took place on 30 May 1949. 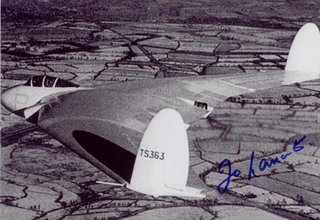 Test pilot Jo Lancaster DFC was forced to eject from an Armstrong Whitworth AW52 prototype using a pre Mk1 ejection seat over Southam, Warwickshire.  UPDATE 11 August 2019: Lancaster passed away on 10 August 2019 at the age of 100.

Martin-Baker were not the first to develop and deploy ejection seats.  Compressed gas and explosive fired seats have been developed in Germany and Sweden during WWII.  However the explosive, and later rocket, powered Martin-Baker seats have become the most widely used worldwide, with a market share of around 55%.

Martin-Baker remains family run business, jointly managed by the twin sons of the late founder, Sir James Martin, and headquartered in Denham.  The company has manufactured over 70,000 seats and have around 17,000 seats currently installed on 51 aircraft types with 88 operators.  To date 7497 people have been saved by Martin-Baker seats around the world. The company continues to use military registered Meteors as test aircraft. Aerossurance is highly experienced in military aircraft design, safety and regulation.  For practical aviation advice you can trust, contact us at: enquiries@aerossurance.com