The aircraft lined up for takeoff in conditions of reduced visibility [at 20:28 local time]. The crew believed that the lights they could see ahead were runway centreline lights when they were actually runway edge lights [though this runway had no centreline lights]. The aircraft began its takeoff run but ran off the paved surface and onto grass. The commander closed the thrust levers to reject the takeoff. 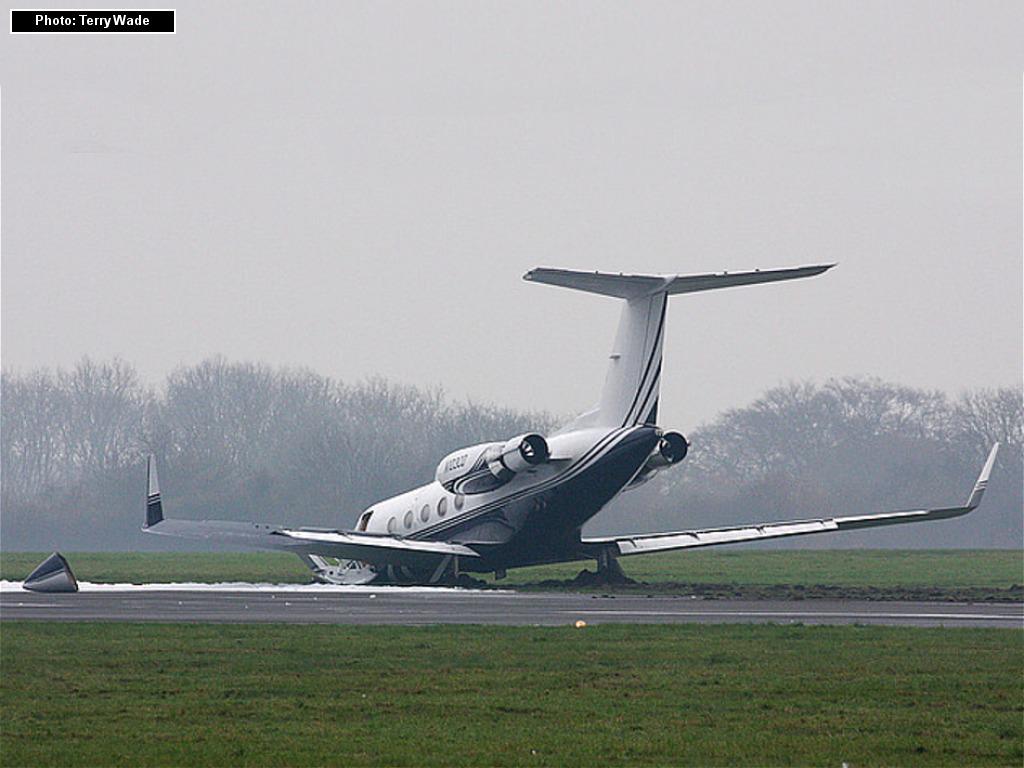 The incident involved US registered G-III (G-1159A) N103CD on 24 November 2014, departing on a private flight to Gander, Canada.  The crew of 2 and the 5 passengers were unharmed.  The aircraft was assessed as being beyond economic repair.  The nose landing gear broke off and tore a 6.5 m long hole on the fuselage skin. A number of frames were damaged and the upper fuselage skin creased and ruptured.

Visibility was not in practice as good as the crew thought:

This was a private flight which could not depart in conditions of less than 400 m [Runway Visual Range] RVR. RVR cannot be measured at the threshold end of Runway 03 but the prevailing visibility was reported as being more than 10 km.

The crew reported that there was moisture on the windscreen from the mist and they could see a “glow” around lights which were visible to them. They were also aware while taxiing that there was some patchy ground fog on the airfield. The ATC controller transmitted that visibility had not been measured in the fog patches but there seemed to be ‘very low, very thin fog from the zero three threshold to approximately half way down the runway’.

With hindsight, this piece of information is significant but, at the time, the crew did not consider the fog to be widespread or thick; operating under FAR Part 91 in the United States, they were used to making their own judgments as to whether the visibility was suitable for a takeoff.

However, after the aircraft came to a halt following its abortive takeoff attempt, the controller could only see the top of the fuselage and tail above the layer of fog. It is likely, therefore, that the visibility was worse than the crew appreciated at the time N103CD taxied from Holding Point J1.

Biggin Hill was originally a Royal Air Force (RAF) station.  At the beginning of Runway 03 there is a former RAF Operational Readiness Platform (ORP).

The aerodrome chart used by the crew was contained in an iPad app which was updated through a subscription service with the product supplier. [That] and the source of information in the UK [Aeronautical Information Publication] AIP, suggested that the aircraft would be required to taxi in a straight line from J1 to the runway and then make a right turn onto the runway heading. The UK AIP states that there is no centreline lighting on Runway 03, and that the pavement width at the beginning of the runway is twice the normal runway width. It recognises the potential for confusion and urges crews to ensure that they have lined up correctly.

This information was not available to the crew on their aerodrome charts and both crew members believed that the runway had centreline lighting.

The AAIB also note that:

Pilots had previously reported having difficulty when vacating the runway near the Runway 03 threshold because of a lack of taxiway lighting. In 2009-2010 the Australian Transport Safety Bureau (ATSB) produced a report, ‘Factors influencing misaligned take-off occurrences at night‘.  The AAIB  highlight that five of the factors identified by that ATSB report were present in this accident:

The airport’s SMS had identified a need to enhance the lighting in the area surrounding the Runway 03 threshold.  This required major ground works and construction of a sub-station.  It had been planned for summer 2015.  In the interim after the accident reflective studs were installed.

The chart supplier revised its Biggin Hill Airport Diagram Chart to include the extra information in the AIP.

The dominant common factor between this accident and other misaligned takeoffs is that a visually compelling line of edge lights was visible to the crew and was assumed to be centreline lighting.

Consequently they have made the following recommendation

Safety Recommendation 2015-038 It is recommended that the International Civil Aviation Organisation initiate the process to develop within Annex 14 Volume 1, ‘Aerodrome Design and Operations’, a standard for runway edge lights that would allow pilots to identify them specifically, without reference to other lights or other airfield features.

UPDATE 18 May 2016: The AAIB have issued an update on the status of this recommendation.

This 1984 G-III was registered to World Heir Inc based in Georgia, US.  In has been reported as being the private aircraft of televangelist Creflo Dollar, who then tried to fund raise for its replacement by a new G650: Pastor Creflo Dollar might get his $65 million private jet after all

UPDATE 3 February 2016: On 25 January 2016 at Karup, Denmark a serious incident with an ATR 72 OY-LHA of Motorfly occurred according to the BEA:

UPDATE 9 June 2016: AAIB publish another report on a runway excursion at Norwich: AAIB investigation to Cessna 525A, Citationjet CJ2, G-TBEA

UPDATE 25 August 2016: The Danish Havarikommissionen for Civil Luftfart publish their report on January’s incident at Karup (a military base that is also used for civil operations):

In darkness and hazy weather conditions, the flight crew lined up the aircraft on the runway edge lights along the right-hand side of runway 27L instead of the runway centreline lights of runway 27L.

A combination of environmental, operational, and human factors contributed to the sequence of events:
– Dark night operation
– Reduced visibility
– Runway and taxiway environment, including an extra tarmac width on runway 27L, the absence of runway shoulder markings, the absence of taxiway centreline lighting, and the use of a displaced threshold
– Flight crew divided attention unintentionally provoked by the before take-off procedures and checks
– Flight crew fatigue

UPDATE 9 February 2017: The Australian Transport Safety Bureau (ATSB) have reported on the case of Beechcraft King Air 200 VH-XGV that took off at Brisbane on 26 October 2016, striking edge lighting:

UPDATE 9 February 2018: It is reported that Air Georgian  Beechcraft  B1900D  C-GORN, operated for Air Canada Express was damaged in an incident at Toronto Lester B. Pearson International on 21 January 2018.

The flight crew heard a noise and felt the aircraft pulling to the left. The takeoff was aborted at approximately 65 knots, the aircraft exited on to Taxiway D4 and stopped.

…examination by maintenance personnel revealed minor damage to the propeller blades and minor indentations to the left side of the fuselage, aft of the entry door. There were no reported injuries.

UPDATE 2 November 2018: The Dutch Safety Board publish their report into a misaligned take-off from Runway 24 at Amsterdam Airport Schiphol, at night involving Swiftair Emb-120 Brasilia EC-JBD on 18 January 2016. The aircraft had damage to the right propeller,  the right side of the fuselage and both nose wheel tyres.

UPDATE 10 May 2019: The National Bureau of Air Accidents Investigation of Ukraine (NBAAI) have issued their final report (in Russian) into the damage sustained during landing in fog of Belavia Boeing 737-500 EW-290PA at Kiev Boryspil on 9 December 2018.

The probable cause was that the captain had seen “a stable visual illusion in the fog” and formed a mental model that the left hand runway edge lights were the center-line lights. He only realised the error after touchdown by which time a balked landing was no longer possible.

…lining up on Runway 23R from intersection J1 at Manchester Airport, the sun’s glare on the wet runway made it difficult for the pilot to see the runway markings. He aligned the aircraft with the runway edge stripe, rather than the centreline and, as instructed by ATC, commenced a rolling takeoff.

The ATCO noticed the misalignment and instructed the aircraft to abandon its takeoff, which it did without damage or injuries to those onboard. Several safety actions have been undertaken by the airport authority and the air traffic service unit.

As a result of this and a previous incident at J1 the following safety actions have been taken by Manchester Airport:

The ANSP has undertaken to:

At night the flight crew aligned the airplane for take-off with the left runway edge lighting of runway 06 of Cologne/Bonn Airport. During take-off run, the airplane collided with several lamps of the runway edge lighting. Take-off was aborted and the airplane sustained minor damage.

UPDATE 22 January 2021: Conclusions of the BFU final report on EC-INV:

The Serious Incident occurred because the crew confused the left runway edge marking and lighting of runway 06 of Cologne/Bonn Airport with the centre line and therefore had aligned the airplane unnoticed with the wrong runway lighting for takeoff. 07/2020 The International Civil Aviation Organisation (ICAO) should modify the standard and recommendations regarding runway edge lighting in Annex 14 Volume 1 Aerodrome Design and Operations to ensure clear distinction of other airport lightings.

The UK CAA have issued this infographic on distraction:

Aerossurance has extensive air safety, airworthiness, operations, human factors and accident analysis experience.  For aviation advice you can trust, contact us at: enquiries@aerossurance.com