On 22 August 2017 Hawker Hunter F Mk 58 N338AX, operated by Airborne Tactical Advantage Company (ATAC) under contract to the US Navy as a Public Aircraft, was destroyed when it impacted open water about 80 nm southwest of San Diego, California.  It was one of a pair of Hunters supporting an exercise with aircraft carrier USS Theodore Roosevelt and two USAF Lockheed Martin F-35As. The pilot ejected using a Martin Baker Mk3 ejection seat and received only minor injuries. The US National Transportation Safety Board (NTSB) say in their safety investigation report, published 13 April 2020, that:

While flying at 14,000 ft mean sea level (msl), one of the F-35s flew alongside and about 1,500 ft from the accident pilot’s right wing.  Moments later, the F-35 accelerated ahead of the [Hunter] pilot and crossed in front of his flight path from the accident pilot’s right side to his left side. The pilot attempted to follow the F-35, but the airplane then initiated a right turn and passed in front of the pilot’s flight path again, this time to the right.

As the pilot started to turn right to follow the F-35, he heard a “thump”, which he dismissed as jet wash. He continued his maneuver and rotated to the right into an approximate 60° angle of bank and began to apply back pressure, but the airplane immediately rolled into a left bank, at which time the F-35 disappeared from his view. 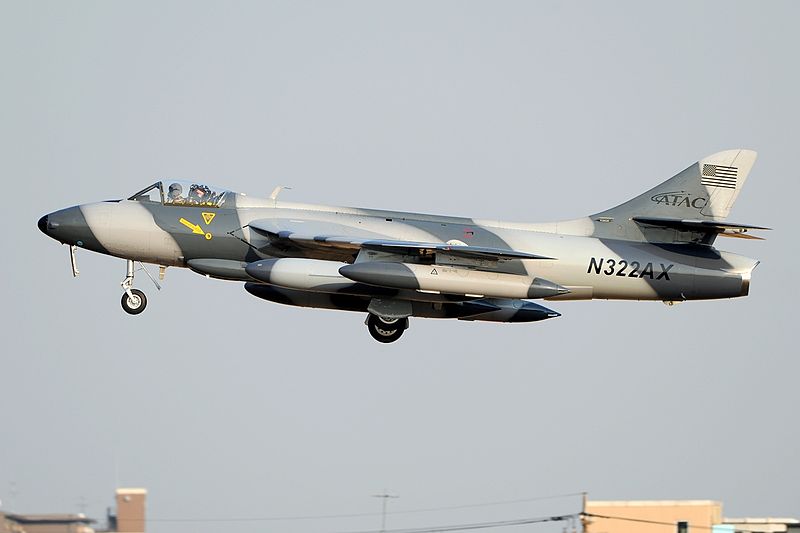 The airplane then entered an approximate 35° nose down attitude, at which time the pilot applied back pressure on the flight controls, but the airplane repeated its previous movement and entered a left-hand roll. After about 2 full 360° rotations, the pilot stopped the movement with some right aileron, but the flight controls still would not advance to the right more than one inch beyond its center position. As he was passing through 4,000 ft mean sea level, the pilot notified his wingman that he was ejecting. He did not observe any unusual sounds or harmonics from the engine during the accident flight.

The airplane impacted open water about 2 nm from its final radar data point. ATAC reported that the debris field was comprised of an oil slick, and no physical remnants of the aircraft. The airplane wreckage was not recovered. During the accident sequence, the pilot observed his flight control magnetic indicators (MI), which display hydraulic power to the elevator and ailerons. The MIs were obscured by condensation and sun glare, but appeared black, indicating that the airplane was attempting to boost the flight controls by hydraulic power. Power Mode ON was selected for both flight controls when the loss of control occurred. No change was observed in the MIs or the handling of the airplane when the pilot momentarily cycled the Power Mode from ON to OFF and back to the ON position again.

According to the pilot, the procedure for terminating a roll is to apply rudder opposite the direction of rotation. He reported to ATAC that he did not execute this maneuver because he did not have a yaw rate. In the procedure, if the spin persists, the pilot can advance the flight controls to the full forward position and in the direction of the turn needle. The pilot attempted the second procedure but was unsuccessful in remediating the spin. A report of the incident furnished by ATAC stated that he then returned the flight controls to the neutral position after he observed that his airspeed had reached about 350 kts.

The Hunter was manufactured  in 1959 for the Swiss Air Force (as J-4085).  After retirement, sometime before the type was withdrawn in Switzerland in 1994, it was on display for several years before being registered in the US in 2014.  The aircraft had flown just 3,242.6 hours.

At the time of the accident, the engine had accrued about 323 total hours since its most recent overhaul, and a total of 41 flight hours since its recent conditional inspection.

The pilot’s loss of airplane control after flying through another airplane’s jet wash during an air defense exercise.

Despite no mention of mechanical issues in the Probable Cause the report is classified “Flight control sys malf/fail”.  There is comment that:

The airplane’s flight logbook captured the reported maintenance deficiencies from January 2017 to the date of the accident. A reported deficiency from August 15, 2017 stated that the “aileron trim indication was found inoperative during pre-flight checks.” As a result, the position transmission cable, trim motor bellcrank, and trim operating rod were replaced. Additionally, aileron travel was confirmed in accordance with AP101B-1307-1, Section 3, Chapter 4, Figure 11.

The only evidence a defect occurred during the accident flight was the pilot’s statement as no wreckage was recovered.