Dramatic passenger-shot video footage of a helicopter ditching and rescue off Malaysia has emerged: VIDEO

The Sikorsky S-76C 9M-STE (MSN 760398) of MHS Aviation, chartered by Malaysian oil and gas company Petronas, was on approach to a 3D seismic ship in the South China Sea on 12 December 2013. The 105m long, 9800GRT vessel has a 22m bow mounted helideck, approximately 20m above sea level.  She is capable of towing seismic ‘streamers’ of up to 9km in length. The vessel was 86 nm offshore Bintulu, Malaysia.  The video footage indicates that the vessel was underway with streamers deployed in light rain and ~1m waves. 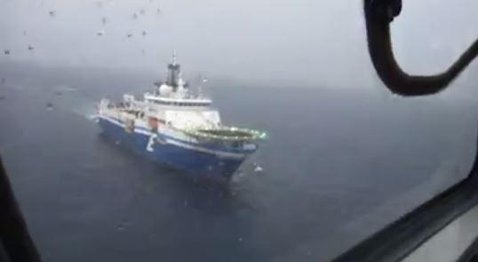 The helicopter makes a slow approach to the deck into wind and just as it positions ahead of the vessel, with the helideck to the left hand side, the audio indicates an engine power loss. At this point the passenger braces and video is temporarily lost as the aircraft ditches.  The soundtrack indicates that water was entering the cabin about 15 seconds after the engine rundown, and the passenger’s submerged lifejacket is briefly glimpsed. The helicopter had 8 people on board (2 crew and 6 passengers).  All exited the aircraft.  The aircraft floatation system does not seem to have been deployed, and the aircraft appears to be floating, almost submerged on its left hand side.  It is understood to have subsequently sunk. While one aircraft liferaft seems to have deployed, it appears all occupants were promptly rescued from the water by fast rescue craft from the ship, which steamed on. The status of the Malaysian accident investigation is not known (see Ministry of Transport website).  However, it is known that the Australian Transport Safety Bureau (ATSB) was requested to provide assistance in the download of the helicopter’s cockpit voice recorder (CVR). In late 2014 ATSB reported that the estimated completion date would be July 2015.

UPDATE 4 September 2015: The ATSB website revised that forecast to December 2015.

UPDATE 1 December 2016: The accident report is still awaited and the ATSB now forecast this month (the 3rd anniversary of the accident).

UPDATE 1 February 2017: The ATSB forecast for issue of the report has slipped to April 2017.

UPDATE 13 April 2017: The ATSB say the Malaysian final report has been issued, though it is yet to appear on the Ministry of Transport website.  We will monitor for its publication.

UPDATE 13 December 2017: Information received by Aerossurance is that disappointingly the ICAO Annex 13 report will not be made public.