On 28 May 2014, piston engined Robinson R44 helicopter N392GP, operated by survey company Global Positioning Services Inc, crashed while conducting underslung (HESLO) load training at Chugiak, Alaska.  The pilot was the sole person on-board and died in the accident.  The National Transportation Safety Board (NTSB) have issued a preliminary report.  After impact, there was a post crash fire. 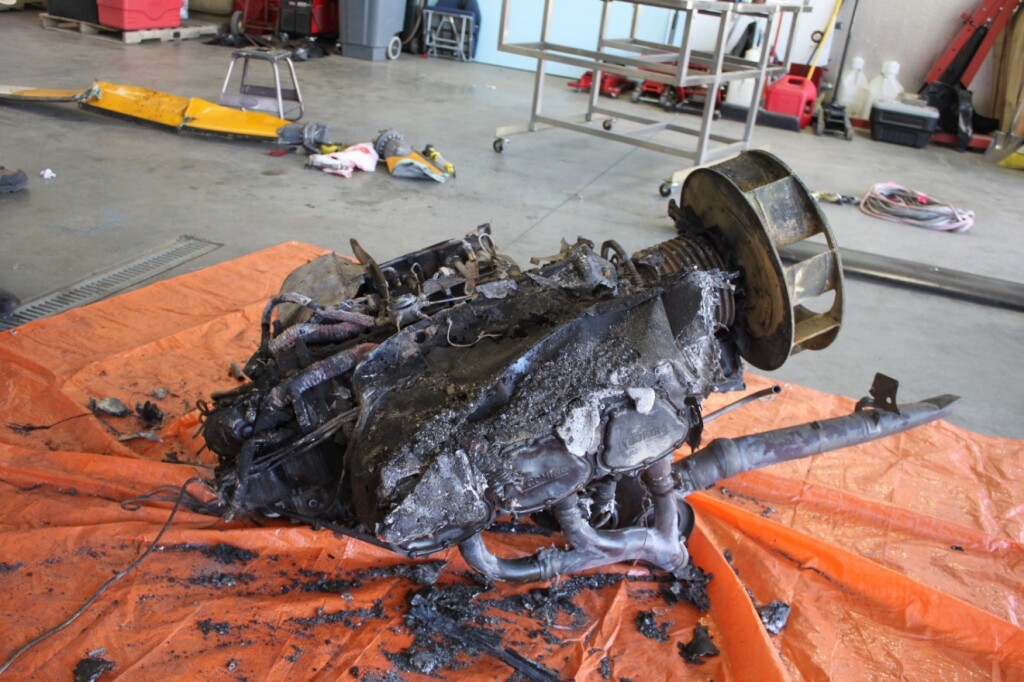 The R44 has a history of post impact fires.  Robinson introduced a Service Bulletin in 2012 to replace the original aluminium fuel tanks with more impact‑resistant bladder‑type fuel tanks.  Although Robinson recommend that this SB is embodied, in most countries it only has legal force when an Airworthiness Directive (AD) is adopted.  In the US, the NTSB have recommended this (SB) be made mandatory.  As yet the US regulator, the Federal Aviation Administration (FAA) has chosen not to issue an AD, but simply ‘recommend’ this SB.  The Australian accident investigation agency, the Australia Transport Safety Bureau (ATSB), who have investigated several R44 accidents with catastrophic post-crash fires has also recommended that operators embody the SB.  The regulator in Europe, the European Aviation Safety Agency (EASA), disagrees with the FAA and does believe that the original tanks result in an ‘unsafe condition’ and issued an Airworthiness Directive earlier this year, applicable in all EASA Member States.

UPDATE: the probable cause was added 9 August 2017:

The pilot’s loss of control of the helicopter due to impairment or incapacitation from a sudden, acute cardiac event.

Another R44 helicopter, N74713, operated by Quicksilver, crashed in northern Alaska near Coldfoot (population 10 and a truck stop on the Dalton Highway from Fairbanks to Prudhoe Bay), on 18 June 2014, as described subsequently in local press reports and a very brief NTSB database entry.  The helicopter rolled on landing and there were no injuries. The helicopter was carrying a team of geologists from the Alaska Division of Geological and Geophysical Surveys (DGGS) that was making the trip to examine frozen debris lobes, slow moving landslides occurring in permafrost, that are threatening the Dalton Highway, the North Slope Haul Road.

The pilot’s failure to maintain adequate main rotor rpm while maneuvering at a low altitude, which resulted in an emergency landing on uneven terrain. 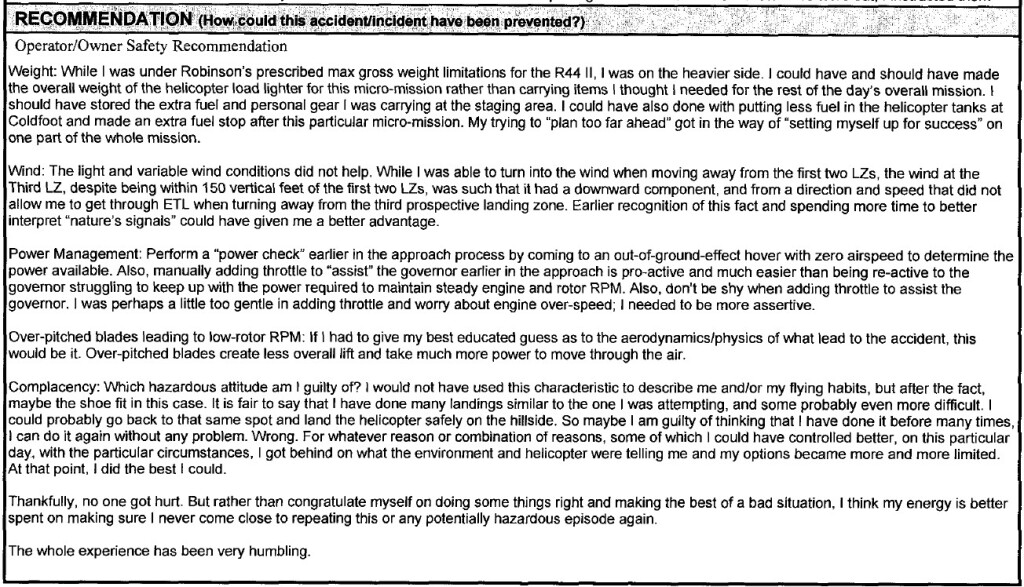 Coincidentally the DGGS’s parent department, Alaska Department of Natural Resources, has just put out a notice for helicopter contractor to provide heli-borne geophysical surveys for two areas in interior and southern Alaska, with tenders due by 2 July 2014.  Coldfoot has a small private airstrip, at which there was an accident to a DHC-3T Turbine Otter in 2011, that landed on soft ground.

The Australian Transport Safety Bureau (ATSB) has commenced an investigation into a collision with terrain involving Bell 206L3, VH-NKW, at the Scotia 3D Seismic Camp, near Taroom, Queensland, on 20 June 2014.  The helicopter was operated by MI Helicopters.

While conducting sling load (HESLO) operations, the load became tangled. The pilot reportedly attempted to land, but at about 10 ft above ground level, the line pulled tight. The pilot was unable to release the line (aka ‘pickle the load’) and the helicopter collided with the terrain.  The pilot received minor injuries and the aircraft was substantially damaged. The ATSB are predicting they will report on this accident in August 2014 (surprisingly quickly).

The pilot of a Bell 206 helicopter, registered VH-NKW, was tasked to drop equipment bags for seismic operations by using a magnetic bag runner connected to the helicopter by a 100 ft long-line. 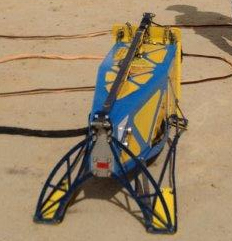 The helicopter lifted off with seven bags loaded on the runner. During the flight of about 2 NM, the pilot observed that the bag lanyards became tangled. The pilot manoeuvred the bags onto the ground and using dual switches on the cyclic control, released the two solenoids to drop the first bag. The lanyard was tangled around the others and the released bag remained hanging and entangled with the other bags. The pilot then released the second bag and attempted to make the bags drop. He then repeated this for six bags and eventually one bag remained connected to the runner with the other bags entangled and hanging from it.

The main rotor blade collided with the ground before the pilot reached the long-line release switch. The helicopter rolled over and came to rest inverted, resulting in substantial damage. 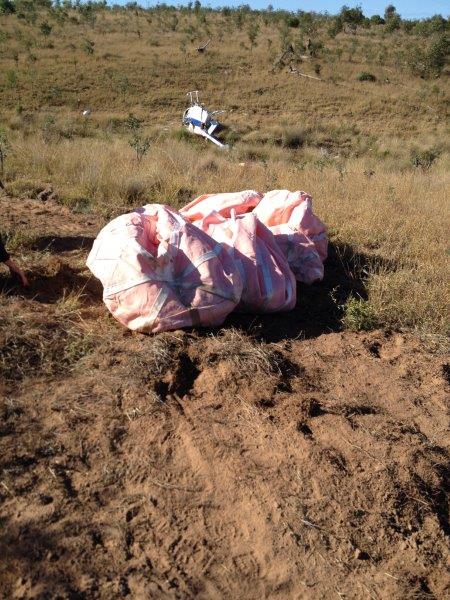 This incident demonstrates the importance of using equipment in accordance with established best practice. The operator advised that the bag runner is no longer to be used for bag layout operations; it is only to be used for bag retrieval/pick-up.

If you are not familiar with automatic bag runners, have a look at this Canadian video using a similar Rupert’s Land Bag Runner on a long line: Video

On 24 June 2014, Airbus Helicopters AS350B3e (H125), LN-OSY,  of Pegasus Helicopters impacted the ground shortly after take off at a former military firing range at Hjerkinn in Oppland county.  Of the 5 persons on board, only one, the pilot, received minor injuries, the rest were unharmed.

The accident will be investigated by the Accident Investigation Board Norway (the Statens Havarikommisjon for Transport).  Thile still under investigation, the video is consistent with an engine power loss shortly after take off.  The aircraft was on charter to the Norwegian Defence Estates Agency (NDEA) to support the clean-up operation at the Hjerkinn Firing Range, near Dovre.  The range was established in 1923.  When it was decommissioned in 2008, it was the largest firing range (165 km²) in Southern Norway.  Since then it has been subject to a remediation campaign, which used remote controlled ground equipment.  Video on clean-up

AIBN investigations indicate that engine power was lost due to blockage of fuel supply to the engine.

It has not been possible to find a clear explanation of what caused this blockage.

AIBN has found that warning-logic in the helicopter did not provide the pilot in command with the appropriate information according to the severity of the onset error. In this connection, the Accident Investigation Board Norway has issued a safety recommendation to the helicopter and engine manufacturer. 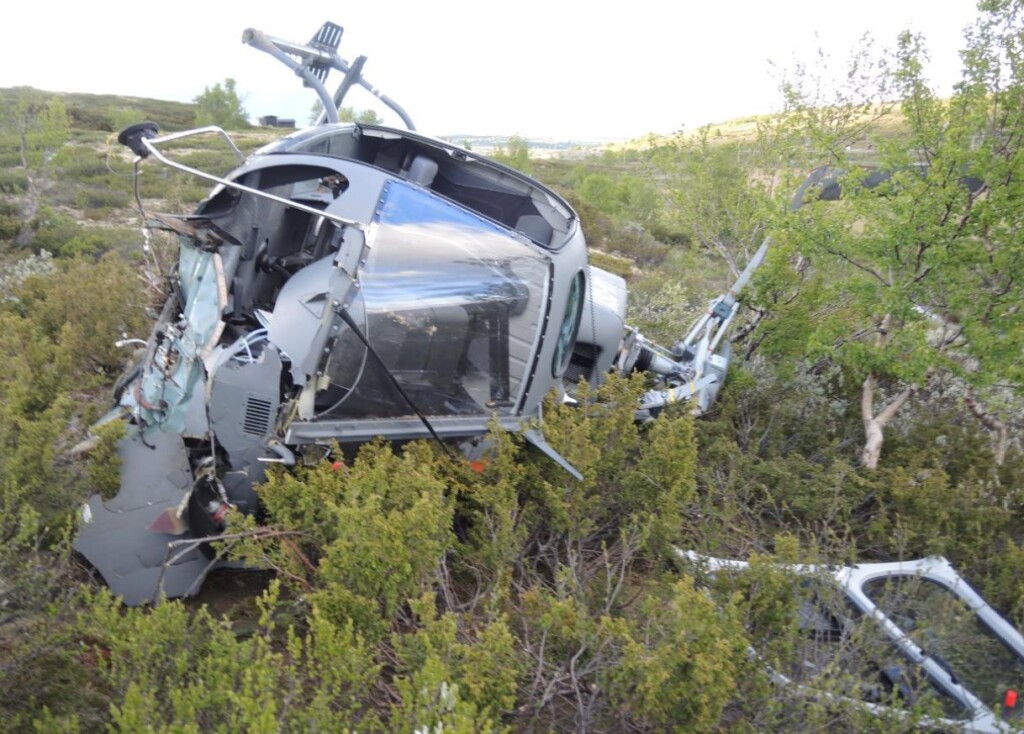