Cessna 152, G-WACG and Guimbal Cabri G2 helicopter G-JAMM collided in mid-air when both were engaged on training flights near Waddesdon, Buckinghamshire on 17 November 2017. 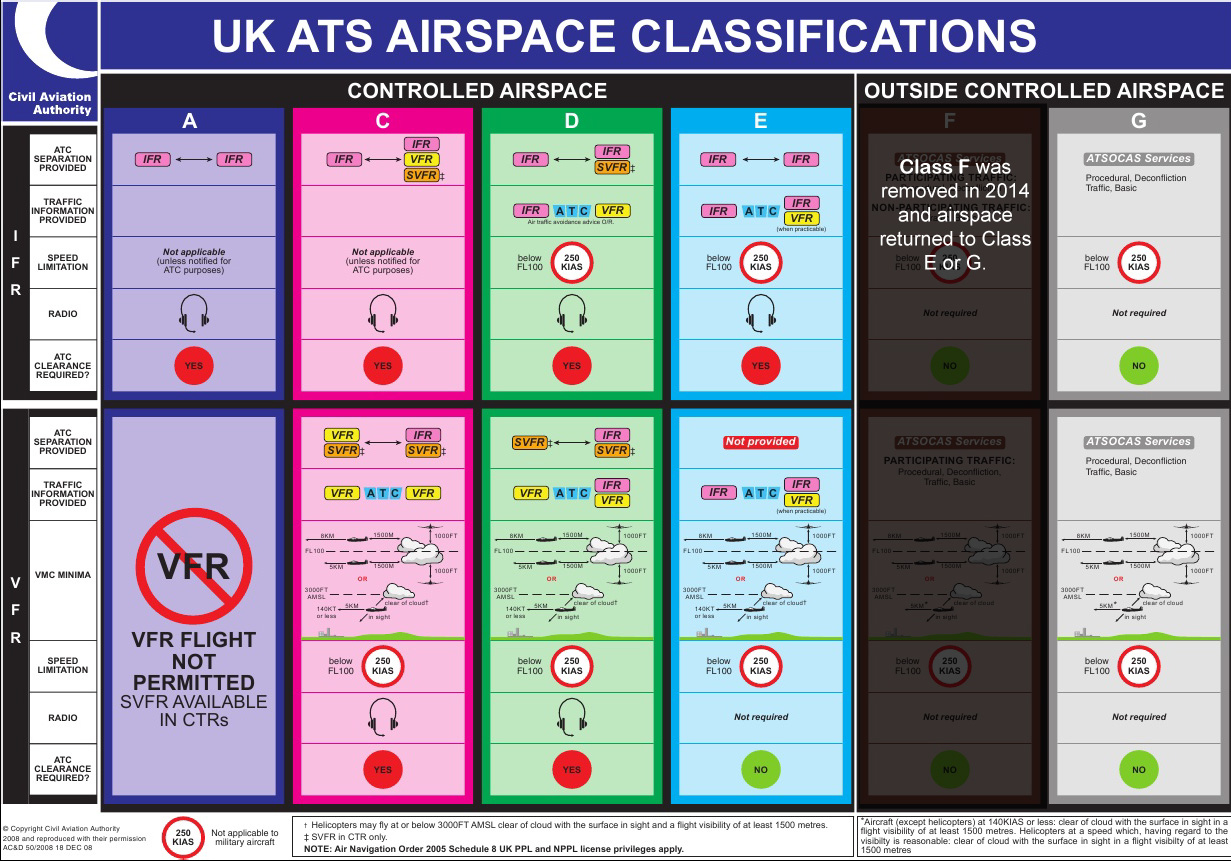 Both aircraft were based at Wycombe Air Park/Booker(WAP). WAP is a busy general aviation airfield with fixed wing, rotary and gliding activity.  The weather conditions were clear with good visibility.  [However], the opportunity for the occupants of either aircraft to see the other was limited because, although they were in proximity for some time, they were both following a similar track and were not in each other’s field of view. At 1159:10 hrs, G-WACG, with a higher groundspeed, was approximately 0.5 nm behind G-JAMM and 1,950 ft above. A minute later, G-WACG was 750 ft above and approximately 1,000 ft behind. The vertical and horizontal separation progressively reduced to the point of the collision.

The damage sustained by G-WACG indicated that the initial contact with G-JAMM was between the right wing of the aircraft and the main rotor blades of the helicopter. The collision occurred in an area called the Brize Norton-Heathrow-Luton Gap, that the Future Airspace Strategy VFR Implementation Group (FASVIG), now Airspace4All, described as an:

Intensive private and commercial licence training area for Oxford, Wycombe, White Waltham and other airfields/airstrips in the area, plus helicopter training from RAF Benson.’

Radar data indicated that, when G-WACG was 1,950 ft above G-JAMM, it was only 0.5 nm behind it. A simple assessment indicates that, if G-WACG was straight and level with zero pitch angle at 2,000 ft above G-JAMM, it would have to have been at least 1.9 nm behind for the pilot to have had any opportunity of detecting a possible conflict without additional manoeuvring.

In the absence of a turn, the pilot would need to have pitched the aircraft at least 24° nose-down to have had any chance of observing the helicopter. The situation, whereby additional manoeuvring would have been required by G-WACG to bring the helicopter into view, would have persisted up to the point of collision.

The cockpit field of view from the Guimbal Cabri G2 is predominantly forwards and sideways.  Rearward visibility is severely restricted by the engine and transmission, making rearward searching for an overtaking aircraft impractical.  G-JAMM was painted predominantly metallic red with the upper section and tail painted white. The main rotor blades were light grey with yellow tips. The European Aviation Safety Agency (EASA) Part-FCL – Subpart C provides a syllabus of flight instruction for a Private Pilot’s Licence (PPL) and includes the note: ‘Each of the exercises involves the need for the applicant to be aware of the needs of good airmanship and look-out, which should be emphasised at all times.’ Specific details concerning the use and interpretation of the syllabus is the responsibility of the National Licensing Authority, in the UK this is the Civil Aviation Authority (CAA).

CAA Safety Sense Leaflet 13, ‘Collision Avoidance’ provides comprehensive guidance on the importance of lookout for pilots operating under Visual Flight Rules (VFR). It includes information on physical limitations of the human eye and on visual scanning techniques. Training for the Private Pilot’s Licence also includes advice to pilots on the importance of lookout and guidance for lookout technique.

Elementary Flying Training for the Royal Air Force has been conducted on the Grob  Tutor aircraft. The associated Tutor Training Manual introduces the ‘work cycle’ approach of Lookout-Attitude-Instruments for all phases of flight. It also provides guidance, specific to each training detail, on lookout technique. The advice given for the Glide Descent is: ‘Lookout. As always lookout, is vital. Before descending you must ensure the area ahead, behind and below the aircraft is clear. When in the descent, you will see that the flightpath ahead is obscured under the aircraft’s nose and so, in a long visual descent, you will be taught to clear this area in a gentle weave similar to that used in the climb.’

The US Federal Aviation Administration issued an Advisory Circular ‘Pilots’ Role in Collision Avoidance’ (AC No: 90-48D) in June 2016 highlighting the importance of lookout. Section 4.3.1 Pilots’ Responsibilities advises that: ‘Pilots should: During climbs and descents in flight conditions which permit visual detection of other traffic, execute gentle banks left and right at a frequency which permits continuous visual scanning of the airspace about them.’

The flying club which operated G-WACG has issued an Instructor Notice to highlight the importance of maintaining an effective lookout throughout flight, and the need to carry out a regular change of heading during a prolonged descent, to check that the area ahead is clear.

A research report, Limitations of the See-and-Avoid Principle, by the Australian Transport Safety Bureau (ATSB) from 1991 states:

Numerous limitations, including those of the human visual system, the demands of cockpit tasks, and various physical and environmental conditions combine to make see-and-avoid an uncertain method of traffic separation.

…the see-and-avoid principle in the absence of traffic alerts is subject to serious limitations’ and that reliance on ‘see-and-avoid’ as a means of traffic separation should be minimised.

The US National Transportation Safety Board (NTSB) issued a Safety Alert ‘Prevent Midair Collisions: Don’t Depend on Vision Alone — Augment your reality to help separate safely’ (SA-058 November 201613) to encourage pilots to adopt the use of available technology to assist them in the detection of other aircraft.

… are not required to carry or use a radio, transponder or, other EC system, or communicate with Air Traffic Control. Instead, pilots and other airspace users rely on visual scanning to detect and avoid other traffic: this is known as the “see and avoid” principle. Visual scanning can however be affected by a variety of issues including: environmental conditions, aircraft design, pilot training and the limitations of the human eye.

Both G-JAMM’s and G-WACG’s transponders transmitted their pressure altitude and aircraft ident of 7000. In addition, G-JAMM was Mode S  and extended squitter equipped, transmitting its 24-bit aircraft identifying address and ADS-B Iut. Neither aircraft was equipped with an EC device that could receive and display ADS-B data to its pilots [aka ADS-B In].  … [so] neither could receive relative position and altitude information for each other.

The UK Airprox Board collates and analyses information on all reported UK Airprox events and publishes an annual report. Every event is attributed a risk rating and the effectiveness of identified safety barriers in avoiding a mid-air collision is also assessed. For 2016, ‘see and avoid’, outside of controlled airspace, was attributed a weighting of 20% as a safety barrier. Analysis of 71 events, in all airspace, indicated that ‘see and avoid’ was only fully effective in 35% of cases and partly effective in 49%.

In September 2017, the AAIB reported on a fatal mid-air collision which occurred in December 2016 in Class G airspace. Both aircraft were fitted with a type of EC aid but differing technologies meant that they did not communicate with each other.

In 2009, the AAIB investigated a fatal mid-air collision in Class G airspace between a Grob G115E and a glider. The report made Safety Recommendations to the CAA regarding EC.

The AAIB note that work is ongoing to promote the development and use of compatible EC aids to mitigate the limitations of ‘see and avoid’.  CAP1391 specifies EC devices that would allow a “see-BE SEEN-and-avoid” strategy.  CAP1391 includes a procedure for self-declaration that allows the device to be covered under a single UK national equipment approval.  The CAA say:

To meet the criteria for low cost and low power, EC devices use limited capability, low complexity, off-the-shelf components that do not meet classical aviation equipment requirements. Although this is reasonable for a device carried voluntarily as an aid to “see-and-avoid”, it also means that their transmitted data cannot be relied upon and, consequently, their design requires that any functional failures will result in a ‘No Safety Effect’.

However, GNSS receivers are now available that meet the intent of FAA TSO-C199 Class B for Traffic Awareness Beacon Systems (TABS), which are qualified to a recognised aviation standard and provide enhanced performance for relatively low cost. These robust receiver designs are capable of providing potential performance enhancements for EC devices, allowing them to report improved functional capability within allowable limits.

The CAA has reviewed the TSO-C199 Class B specification and test requirements, and amended CAP to formally recognise GNSS receivers qualified to this TSO as position sources that may be incorporated as part of EC devices or for connection to EC device transmitters.

EASA has published this research report: EASA.2011.07 Scoping improvements to ‘see and avoid’ for General Aviation.  In November 2017, the EASA published the European Plan for Aviation Safety (EPAS) 2018-2022. The AAIB note that Part 5.5.4 focusses on ‘Preventing mid-air collisions’ and includes:

EASA has requested that the CAA and EUROCONTROL consider the similarities and differences in their current approaches to general aviation surveillance. This activity is currently underway; the CAA has reported that they consider ‘an ADS-B solution with across Europe buy in is achievable.’

The operators based at Wycombe Air Park/Booker have agreed that a common approach towards the adoption of EC aids would be beneficial but recognise the current absence of an effective system that would work with a significant number of aircraft.

FLARM primarily uses GPS position determination, and 3- dimensional flight path prediction, being broadcasted via a low power transceiver, in order to provide awareness to all recipients equipped with the same system, about adjacent – potentially conflicting, traffic. In addition, FLARM systems may contain static obstacle data as well as predictive functions, which generate traffic/obstacle alerts to the crew, when obstacles or traffic are being found in the future aircraft flight path.

The geometry of the flight paths was such that the opportunity for the occupants of the two aircraft to ‘see and avoid’ each other was very limited. The damage sustained to each aircraft was such that neither could continue in controlled flight. It is not known whether shallow turns were made during G-WACG’s descent from 4,000 ft and G-JAMM’s main rotor paint scheme would not have enhanced visual conspicuity when viewed from above.  As the separation between the two aircraft gradually reduced over several minutes, the use of compatible EC devices could have improved situational awareness such that avoiding action could be taken. CAP 1391 defines a standard for EC, using ADS-B out, which has been adopted by some manufacturers. Other manufacturers have created and sold cost-effective devices, using a different standard and frequency, which are widely used and can be operated at the same time as the aircraft’s transponder. With a growing uptake in EC devices, interoperability between systems and frequencies is vital to ensure its success in preventing mid-air collisions.

UPDATE 18 March 2019: UK CAA has  launched a call for evidence on proposals for the wider roll out of Electronic Conspicuity in the UK (CAP1776).

UPDATE 30 April 2019: The Coroner’s Inquest opens into the Buckinghamshire accident.

UPDATE 2 May 2019: The four deaths are ruled to be accidental.