Machining Defect Cause of V2500 Failure 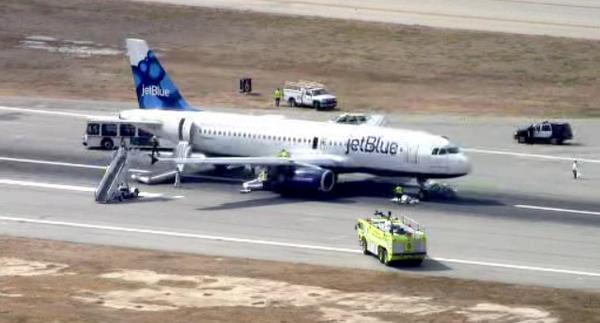 JetBlue A320 N656JB stopped on the runway at Long Beach (Credit: via NBC LA)

The flightcrew shutdown the No. 2 engine, discharged both fire bottles, and performed an air turnback to Long Beach. The airplane made a successful and uneventful single-engine landing…

Examination of the outside of the engine revealed a fractured fuel pressure line…and evidence of thermal distress such as consumed, partially-consumed or oxidized insulation blankets, loop clamps cushions, wiring harness sheathing, and sooting of various components and cases. The investigation concluded the fuel pipe had failed due to excessive vibration.  A full engine strip was necessary to identify the cause.

Metallurgical examination…revealed evidence of fatigue from multiple origins that propagated from the pressure side (PS) of the middle (No. 2) fillet towards the suction side (SS) almost through the entire width of the lug before finally fracturing due to progressive tensile overload.

Closer examination of the fractured lug revealed a concave ‘divot’ in the PS No. 2 fillet, immediately adjacent to the fracture surface. The depth of the ‘divot’ measured up to 0.0008 inches at the fracture origin site and the ‘divot’ was confirmed to run the entire length of the fillet. Visual examination of all the other remaining lugs revealed that same ‘divot’ on PS No. 2 fillet and based on this IAE concluded that the groove appeared to be a tool mark resulting from the original machining (broach) operation.

The broaching tool is used to finish 3 discs, each with 72 slots, before re-sharpening (or ‘re-dressing’).  The disc of the failed engine was the middle of three discs broached before the next re-sharpening.  The other two discs were examined by IAE in March 2015.  The first disc had 52 satisfactory slots but the last 20 exhibited the same ‘divot’ tool marks as found on the failed disc.  All 72 slots on the third disc has tool marks.

In June 2015 IAE then went on to examine the first disc broached after the tool was next sharpened. All 72 slots exhibited the same tool marks as seen previously.  Further unique tool marks were found on the PS No. 3 fillet.

1) cutter tool draft angle design leading to scuffing/sliding along the relief surfaces with associated side loading/deflection and rapid tool wear,

3) procedural issues with inspection of tooling, set-up and final parts.

Based on these findings, the best practices from GE and IAE have been implemented to address these manufacturing deficiencies.

UPDATE 5 April 2016: The FAA issues a Notice Of Proposed Rulemaking (NPRM) to require inspecting the HPT stage 1 hub and HPT stage 2 hub, and, if necessary, their replacement with parts that are eligible for installation.

We have previously reported on another JetBlue A320 incident: What Leaks in Vegas Stays in Vegas – A320 Hydraulic Failure

A failure to latch the cowlings of a British Airways A319 (a known repeat problem on the type) prompted this article: A319 Double Cowling Loss and Fire – AAIB Report

Aerossurance has extensive air safety, engine design and certification, airworthiness and safety analysis experience.  For aviation advice you can trust, contact us at: enquiries@aerossurance.com