In their May 2015 Bulletin the UK Air Accidents Investigation Branch (AAIB) published two separate reports of night-time collisions between aircraft and obstacles on the apron / ramp last winter.  Both highlight factors that can increase risk.

The AAIB report that after refuelling at Newquay Airport on 31 December 2014, the pilot of an Capital Air Ambulance Beech King Air 200, G-KVIP, commenced taxying to depart.  The right propeller struck mobile airfield barrier system (MABS) equipment.  As well as propeller damage, the aircraft also suffered damage to the right main landing gear door and the right side of the nose. 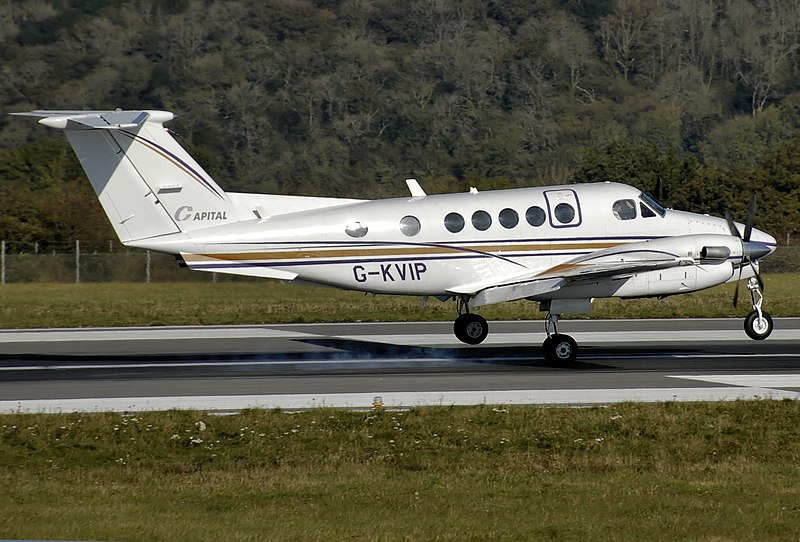 The position of the bowser during refuelling probably obstructed the pilot’s view of the MABS whilst he was carrying out his external inspection. Also, the structure of the aircraft probably partially or completely obstructed his view of the MABS from his seated position in the left pilot’s seat. Unaware of the MABS he did not select his taxi route to avoid it and the right propeller struck the MABS panel, detachment of which caused the other damage to the aircraft.

The AAIB report that after engine start at Coventry Airport on 15 January 2015, the crew of West Atlantic cargo British Aerospace ATP G-BTPC gave the ground crew the signal to remove wheel chocks. When they were removed, the aircraft moved forward and collided with a ground power unit.  After the accident the flight crew realised that the parking brake was not set.

The commander noted that there had been an expectation that the parking brake would have been set to on when the crew first arrived at the aircraft. The parking brake was not an item on the turnaround checklist which the crew had carried out earlier, although it was an item on the pre-start checklist which had therefore not been carried out correctly. The commander also observed that the signal to remove the chocks was given before the GPU had been moved clear of the aircraft. Although the flight crew had not felt rushed, the commander believed that they had been under a time pressure due to the imminent airport closure [it was 0145 and the airfield was due to shut at 0200], and that this had been a contributory factor.

UPDATE 7 May 2017: Ground Collision Under Pressure: Challenger vs ATV: 1-0