HeliOffshore held its inaugural conference 9-10 May 2015 in Lisbon.  HeliOffshore, launched in October 2014, is the new industry association for organisations with an interest in working together on safety in offshore helicopter transport.  Over 150 people attended the event, including CEOs and COOs from operators and helicopter manufacturers and four representatives from oil and gas companies. As a HeliOffshore member, Aerossurance was pleased to participate in this event in which wide commitment to safety through collaboration was evident.

HeliOffshore, founded by the 5 largest players in offshore helicopter operations (Babcock, Bristow, CHC, ERA and PHI), now has over 50 members, including 25 helicopter operators flying in over 30 countries, with 1,200 aircraft, transporting 4.5 million passengers per annum.

HeliOffshore is already helping to further improve safety and share best practice around the globe.  While the industry will continue to compete vigorously on commercial issues, we are putting competition aside to collaborate on safety.

In an opening panel session with HeliOffshore, the CEOs of Airbus Helicopters and Heli-Union and representatives of BP and Shell, there was broad agreement that the safe return of passengers and crew is the primary goal.  It was also noted that while crises result in close cooperation it is essential to build the trust for close routine collaboration on safety.

The first discussion topic was on the importance of leadership.  When the audience were asked to vote electronically on where the greatest opportunities are for safety improvement, 10% voted for systems and processes, 17% for technology and 74% for culture.  Significantly safety culture is one area that the offshore helicopter community has been particularly attentive to for some time (e.g.: Beyond SMS – May 2008). The concept of aiming for zero accidents was also discussed.  It was said that: “Good is not good enough.  Zero is the only defensible target”.

HeliOffshore Chief Executive Officer Gretchen Haskins then lead a session on ‘working together’.  This included an overview of 6 current workstreams, which were introduced by reference to a bow-tie, developed by Aerossurance, for the soon to be issued Flight Safety Foundation (FSF) Basic Aviation Risk Standard Offshore Helicopter Operations (BARSOHO).  UPDATE 27 May 2015: BARSOHO is launched.  UPDATE 1 February 2017: BARSOHO Version 3 is now fully aligned with the HeliOffshore Safety Performance Model, released in 2016.

Five of the workstreams were inherited from the Babcock/Bristow/CHC Joint Operators Review (launched in 2013) and the one on HUMS was inherited from HeliOffshore’s predecessor the European Helicopter Operators’ Committee (EHOC):

Automation (which includes establishing the automation philosophies of each manufacturer, the introduction of the first offshore Flight Crew Operating Manual [FCOM] and Evidence Based Training)

Application of Health and Usage Monitoring (over 21 meetings, representatives of 8 organisations have been defining best practice for HUMS)

Operational Standards (including three themes: a) customer operational differences [in discussion IOGP stated that their Aircraft Management Guidelines are to be ‘simplified’), b) survivability standards and c) customer audits)

In particular two research programmes are currently being supported.  One is building on earlier UK CAA research on HTAWS algorithms and another using eye-tracking technology already being used in a trial with 737 and 757 pilots at British Airways and Thomson Airways.

As a limited company HeliOffshore held their formal AGM on the Sunday morning.  This included review of the accounts, budgets and HeliOffshore’s organisation. In a panel discussion during the AGM the importance of further expanding the membership was commented upon. After impressive and passionate presentations by four candidates, two new board members were elected: Josiah Choms, CEO of Caverton Helicopters of Nigeria and General Tan Sri Muhammad Ismail bin Jamaluddin, Chairman of Weststar Aviation Services of Malaysia.  They join the CEOs of the five founding companies on the board under the Chairmanship of Bill Chiles, who said:

The Board of HeliOffshore will continue to consider the perspectives of a wide range of offshore helicopter operations. We will track delivery to make sure HeliOffshore is delivering on its commitments and enabling collaboration across our industry to deliver safety benefits for everyone we serve.

…has long been a leading advocate for personnel safety. He drove a safety culture within his company, and by working in partnership with manufacturers, his customers, and his competitors, he demonstrated a commitment to safety that has become the industry standard. 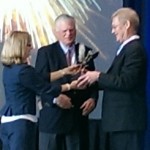 HeliOffshore also recognised several people for their key contributions to the creation of HeliOffshore, including Capt John Black, the Secretary of EHOC since 2003 (and an Industry Co-Chair of the European Helicopter Safety Team [EHEST]), who is now the Company Secretary and Treasurer of Heli-Offshore.

Focusing on the priorities that we know will make the biggest difference to safety, together we will meet our obligation to carry people safely to and from their workplaces every day. We have the best safety experts in our industry working on the things that will make a real impact in the front line, and when you put that together with the support from the top of each organisations, we can achieve great things.

Finally, a specially commissioned video from Step Change in Safety was shown as a neat reminder of that obligation to safely return passengers and crew every day. UPDATE Presentations are now available:

Aerossurance is pleased to be an active member of HeliOffshore and supports its aim of constantly improving offshore helicopter safety around the  world.  For practical aviation advice you can trust, contact us at: enquiries@aerossurance.com