This replaced a rather more basic former Lynx AH7.

A similar Lynx is in place at Stockton-On tees, with a refuelling system: Falck, one of a number providing such training, also uses a Airbus Helicopters H225 mock-up at the Fire Training Group facility on the other side of Aberdeen Airport. ThinkDefence report that Lutra Associates and Oxford Specialist Coachbuilders have delivered one Merlin and one Puma escape trainer under a £200,000 UK Ministry of Defence (MOD) contract.  The units are containerised for easy transport to, for example, barracks and infantry training areas.

In September 2014 Dytecna delivered a trailer mounted Emergency Exit Jettison (EEJ) training rig to the National Police Air Service (NPAS).  It can replicate the emergency exits of the three aircraft types currently in the NPAS fleet:  Airbus Helicopters EC135s and EC145s and the MD Helicopters MD902. 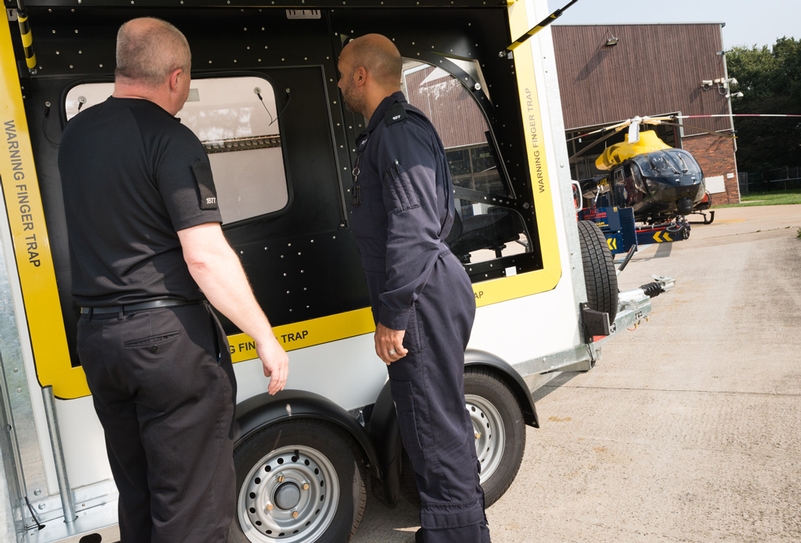 On its delivery, Head of Compliance and Safety for NPAS, Dave Taylor, said:

Before safety training like this was carried out using real aircraft meaning issues of damage, loss of availability of the aircraft when being used for training and staff time to operate it.

The rig can be moved on a trailer and… it will be going to every NPAS base across England and Wales as a part of a rolling training programme so that staff can carry out mandatory safety training in the physical operation of emergency exits. The facility, located within CHC’s Den Helder base, has been designed to resemble a Leonardo AW139 cabin and can also be used to simulate Helicopter Hoist Operations (HHO) conditions from an AW169.

The one-day Helicopter Hoist Operations course, with an optional second day on the aircraft, is designed to offer theory and practice to between four to six candidates. Feedback from launch customers, including a major global oil and gas super operator major, has been very positive. 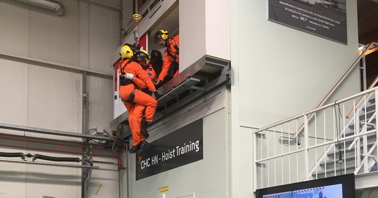 UPDATE 10 July 2019: Survivex have now added a retired Airbus AS365 to their training helideck in Aberdeen.

Survivex AS365 on training helideck in Aberdeen (Credit: Aerossurance)