Investigators say a prototype tilt rotor broke up in flight after a divergent dutch roll developed in a high speed dive.

The Italian civil aviation safety investigation authority, the Agenzia Nazionale per la Sicurezza del Volo (ANSV), has issued an interim statement of the loss of prototype #2 (AC2) Leonardo AW609  tilt rotor  N609AG in Italy on 30 October 2015, during high speed tests.  The two test pilots aboard, Herb Moran and Pietro Venanzi, both died in the accident.  The aircraft was on the third run during that test flight to the maximum dive speed of 293 KIAS (on previous flights the highest test point was 285 KIAS). AC2 incorporated a number of modifications in 2013 to reduce drag, including a modified vertical stabiliser. The ANSV say that data was successfully recovered from the crash-protected Multi Purpose Flight Recorder (MPFR), a combined Cockpit Voice Recorder (CVR) and Flight Data Recorder (FDR).  This was used to help validate telemetry data, however the MPFR lacked key parameters such as latitude, longitude and groundspeed.  A flight tests instrumentation recorder and a video recorder (recording images from cockpit and tail mounted cameras) were both destroyed (neither was crash protected). The ANSV say “the Pilot in Command (PIC) felt the onset of oscillations on the roll axis of the aircraft”.  He counteracted this by a roll input, the conventional technique.  However, the AW609′s flight control laws introduced a yaw input, to counteract an expected flaperon aerodynamic effect in the yaw axis.  This created what the ANSV referred to as a phenomenon “like an augmented dutch roll“.

Recovered data showed this became divergent and the aircraft then broke up in flight as indicated by the debris plot.

As discussed above, in 2013 AC2 was modified to reduce drag, including a modified vertical stabiliser and empennage changes. The AgustaWestland US subsidiary, AgustaWestland Tilt-Rotor Company, based in Arlington, Texas, is the applicant for the AW609 certification, which explains why the prototypes are on the US register.  An Integrated Development Team is based in Arlington and in Cascina Costa, Italy. At the time of the accident the first prototype, N609TR (AC1), which first flew in 2003, was based in the US whilst the second was at Cascina Costa.  AC2 had achieved 567 hours since its first flight in November 2006.

Flight tests were voluntarily suspended after the accident in order to fully support the investigation.  At the HAI Heli-Expo 2016 in Louisville, Kentucky (1-3 March 2016) AW609 Programme Manager, Clive Scott said:

We have a very good understanding of the events and have a view of the most probable causes. That is what’s leading us to say we are expecting to resume flight tests. Two further prototypes are in build, the third (AC3), N609PA, starting ground tests in May 2016.  It was briefly impounded by Italian magistrate but has since been released. Certification is believed to have slipped into 2018.

UPDATE 5 July 2016: At Last, Civil Tiltrotor Ops Are Set To Become A Reality Venanzi, previously an Italian Air Force pilot, had worked as an experimental test pilot with AgustaWestland (now Leonardo) since 1999, and had returned to Italy after supporting AW609 flight tests in Texas. He also played a significant role in the testing and development of the AW139 and bailed out of the first prototype during that programme.  His achievements in flight testing were recognized in 2014, when, along with fellow AW609 pilots Dan Wells and Paul Edwards, he was awarded with the Iven C. Kincheloe Award for an outstanding professional accomplishments in the conduct of flight-testing.

Moran had flown for the US Marine Corps for 13 years, been a test pilot with Bell (were he was lead pilot on the UH-1Y Venom and AH-1Z Viper development programme) and joined AgustaWestland in 2011.  He had begun flying the then Bell/Agusta BA609 in 2005.  In 2002, his accomplishments were recognized industry-wide when the Society for Experimental Test Pilots selected him as the recipient of the Iven C Kincheloe Test Pilot of the Year award.

UPDATE 24 June 2016: Two press articles followed within 6 hours of release of our summary(!):

UPDATE 12 August 2016: The first prototype is now flying from the Leonardo site in Philadelphia. 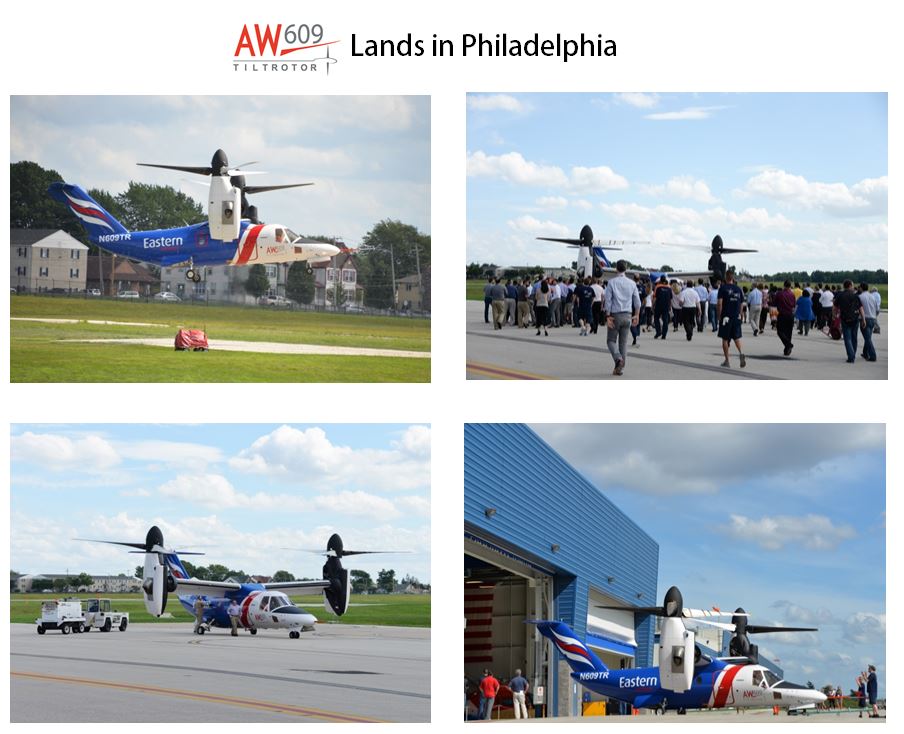 UPDATE 19 December 2016: Leonardo presses ahead with AW609 certification program: It is reported that certification is expected in mid-2018, a one year delay due to the accident.

Flight testing resumed in the summer, and the manufacturer will test the AW609 in flight behind a helicopter icing spray system (HISS) this winter…

The aircraft will undergo icing trials in Marquette, Michigan.

FAA certification…remains on track for 2018.

The fourth AW609 prototype is now located within the main production area of the Philadelphia facility’s assembly line to ensure a smooth transition to the first production build aircraft, also planned for 2018.

UPDATE 26 April 2017: It is reported the ANSV investigation is near to completion:

Investigators reportedly are not considering that the pilots’ actions started the accident sequence, but that their interactions with the AW609’s flight control system might have intensified or prolonged the sequence that led to the in-flight breakup.

UPDATE 10 May 2017: In September 2016 EASA made the following response to the ANSV safety recommendations (detailed in their newly published Annual Safety Recommendations Review 2016):

The FAA is the primary certification authority for the AW609. Currently, EASA and FAA are working to assess and confirm how, in the framework of the certification process, the aerodynamic behaviour as well as the control laws are validated at high speed and in all flight conditions for which the aircraft is certificated.

UPDATE 10 May 2017: The ANSV issue their final report.  ANSV says the crew commenced the third high speed dive with a 180° left turn, aiming for a speed of 293 knots.  On roll-out they observed “slight lateral-direction oscillations”.  The crew believed they were “self-damping”.  The Pilot Flying attempted to correct the roll with “counterphase input roll manoeuvres and then pedal inputs” as they grew in amplitude and frequency.

However these actions did not dampen the oscillations, which instead became divergent, bringing the sideslip angle to reach values above the maximum allowed in those speed conditions.

The flight control laws had the unintended effect of amplifying the oscillations and the sideslip reached 10.5° (6.5° greater than the limit) in just a few seconds.  These conditions however could not be replicated in the flight simulator due to insufficient aerodynamic data on the aircraft’s tail configuration being incorporated in the simulator software. They describe the causes as:

During flight tests in July 2014, the same aircraft sustained damage when its right-hand proprotor hit the wing leading edge after “a significant sideslip developed due to lateral acceleration” after a stall.

No new safety recommendations have been raised. UPDATE 12 May 2017: The flight trials are continuing with progress on icing trials:

UPDATE 25 May 2017: Our comments on the market prospects of the AW609 in the American Helicopter Society’s (AHS) May/June 2017 issue of Vertiflite:

The move comes after an in-depth review of the programme by the division’s new managing director Gian Piero Cutillo, who was appointed in September 2017.  Cutillo said that the milestone is now anticipated at the “end of 2019″, with deliveries beginning “immediately after”.

UPDATE 28 February 2018:  Era are to take delivery of two AW609 tilt rotors in 2020, making them US launch customer. They could be used in a variety of missions, including offshore/utility, VIP transport, EMS and SAR (Era have not settled on a specific role).

UPDATE 24 May 2018:  It is reported that potential charges against 4 employees have been announced by Italian prosecutors.

…include successful drop testing of the production landing gear, production engine certification testing on test aircraft three (AC3), continued fuselage and empennage fatigue testing, installation of a new production main cabin door designed with an embedded rescue hoist for search-and-rescue [SAR] operations, and the continued build of AC4 in Philadelphia. Construction should be completed by year-end.

UPDATE 28 May 2019:  Italian Judge Orders Trial of Leonardo Employees in 2015 Crash of AW609 Prototype and Leonardo Speeding Toward 2019 AW609 Certification in Philadelphia

Aerossurance has extensive air safety, design, airworthiness, flight test and accident analysis experience.  For aviation advice you can trust, contact us at: enquiries@aerossurance.com