The Passengers Who ‘Caused’ a 737 Tail Strike 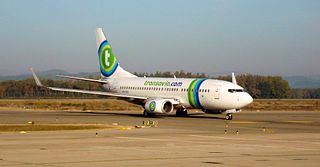 The Dutch Safety Board (DSB) report says the aircraft:

…pitched nose-up just after take -off thrust had been selected. The pitch up movement stopped when the aft fuselage and the tailskid assembly contacted the runway. The crew rejected the take -off, after which the aircraft’s nose came down again to the ground.

The aircraft sustained damage to the lower fuselage area in front of the tailskid, to the tailskid and to the nose gear. There were no injuries to persons.

So what did the passengers have to do with this?  Well, nothing in relation to any action they took but everything to do with it in relation to the body weight of the 113 passengers and where they had been allocated seats! The aircraft was scheduled for flight from Rotterdam, via Maastricht-Aachen to Arrecive, Lanzarote.  The DSB found that:

…nearly all passengers at Rotterdam Airport were checked in at the rear of the cabin and seated themselves there. To facilitate boarding at the next airport (Maastricht-Aachen Airport) the ground handling company Aviapartner had assigned these rear seats to the passengers at Rotterdam Airport. After all, this allowed passengers at MaastrichtAachen Airport to seat themselves in front of the cabin. Because of the uneven passenger distribution, the aircraft’s centre of gravity was situated far behind the applicable aft limit. As a result the nose of the aircraft pitched up and its tail touched the ground.

The DSB used Tripod-Beta as an accident analysis tool.  Tripod-Beta is derived from classic bow-tie theory. Search in databases of other Safety Boards and international organizations revealed that similar occurrences of uncommanded pitch up movements on the ground had occurred. In three cases the aft limit of the CG for take-off was exceeded. The cause was that the distribution of the passengers in the cabin deviated from the load and trim sheet used by the cockpit crew. In another case a significant error in the CG calculation itself was made.

Consequently recommendations were raised. To the airline:

To the ground handler:

To Minister of Transport, Public Works and Water Management (the regulator):

Italian investigation authority ANSV…determined that 77 passengers had disembarked at Verona, after the BH Air jet arrived from Hurghada, but that the remaining 87 passengers flying onwards to Rome were not redistributed. Fifty-eight of these passengers had been in the aft cabin and another 25 in the centre cabin, with just four up front. But although the ramp agent told ANSV that he had submitted a load and trim sheet to the captain, and had told the cabin manager that passengers need to be reseated, this redistribution was not carried out – possibly owing to a language misunderstanding. The captain nevertheless approved and signed the load sheet. As the aircraft reached 60kt it struck its tail on the runway, and further fluctuations, with lower intensity, showed the jet suffered “repeated” strikes, says the inquiry. …a cabin altitude warning, indicating pressurisation problems from the damaged fuselage, sounded as it climbed through 9,750ft. ANSV says that the crew had decided to continue the flight, “contrary” to operating procedures which required an immediate return to the airport in case of tail-strike… The crew opted to return to Verona “only after the activation of [the pressurisation warning]“, the inquiry adds, and did not specify the reason to air traffic control. G-FDZJ was operating a charter flight from Malta to Manchester on behalf of a cruise ship company. On takeoff the pilot flying found the aircraft required significantly more aft control column movement than normal to rotate. The available evidence indicates that the aircraft was out of trim due to an incorrect MACTOW on the load sheet. This occurred because passenger’s actual seating positions were not passed to the handling agent. When producing the load sheet the handling agent assumed an even distribution of passengers within the cabin, when the actual distribution created a forward bias.

UPDATE 9 February 2018: The Irish AAIU  explain how during preparations for departure from Dublin of ATR72-212  EI-FAV on 23 July 2015 the passenger baggage was placed in the aft aircraft baggage hold instead of the forward baggage hold. “The aircraft departed with the Centre of Gravity outside approved loading limits. The aircraft subsequently landed at its destination where the loading error was discovered”.

UPDATE 8 October 2020: UK AAIB have reported on a case where a Wizz Air UK Airbus A321 G-WUKG was substituted for an A320 but due to a communication failure no adjustment had been made to the passenger distribution:

Following this event, the operator took action to: highlight this event to its staff and improve their understanding of the issues raised; and improve the flow of information between operational departments when there is a change of aircraft type to reduce the risk that a similar event would occur in the future.