The UK Air Accidents Investigation Branch (AAIB) has published their Annual Safety Review for 2015 in a new format.

It contains information on the AAIB’s investigations during 2015, an analysis of occurrence types and an overview of the 47 new Safety Recommendations and Safety Actions (the detail is now being uploaded online in a more timely way).  The report also includes articles on the timeline of  AAIB investigations and on drones. 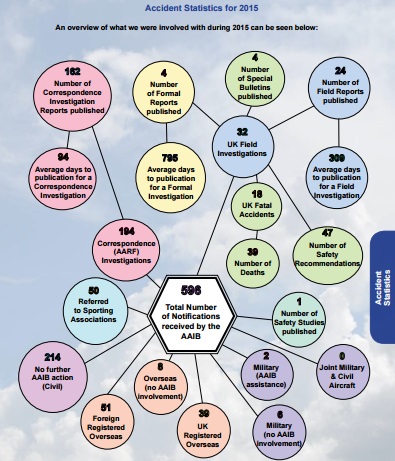 Correspondence investigations are usually conducted on non-fatal accidents on General Aviation aircraft and to some serious incidents on Commercial Air Transport aircraft. This is reflected in the factors in that the majority of the reports were classified as Loss of Control on the ground (LOC-G) and Abnormal Runway Contact (ARC) as well as powerplant failure (SCF-PP). 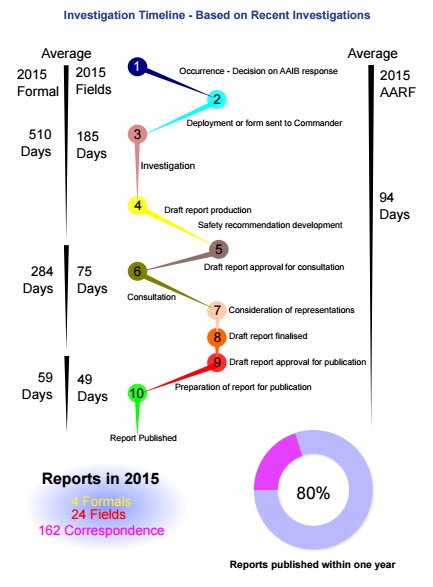 In 2015 the AAIB issued 47 Safety Recommendations from 12 investigations, around third of the number made 10 years ago. 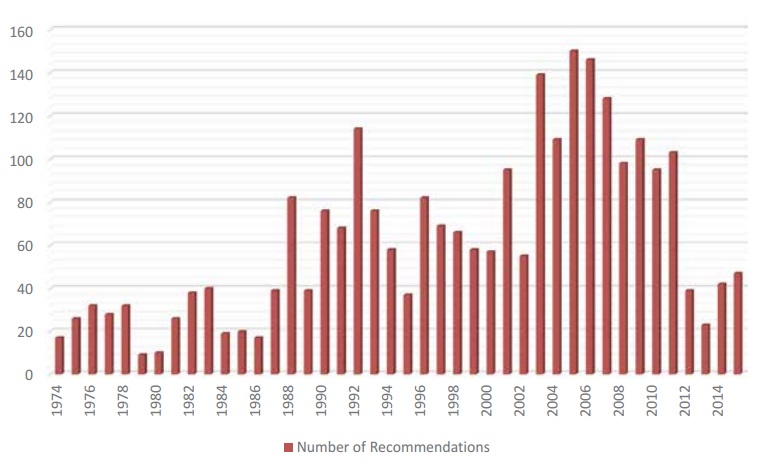 Certification, design and equipment issues make up the bulk of the recommendations, followed by rescue, fire fighting and survivability matters according to this chart in the Annual Safety Review.

Its not clear if this chart covers more than just the new recommendations raised, or if multiple classifications have been made. 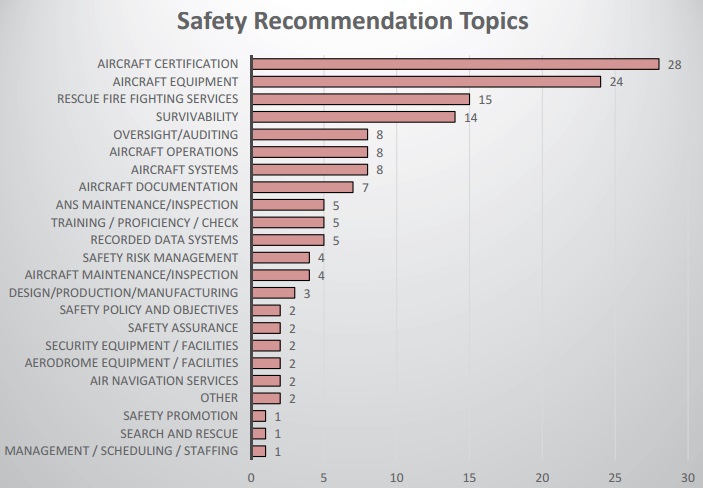 Very positively the AAIB also recognise the safety actions take pro-actively by organisations too in their report.

In the foreword, the outgoing Chief Inspector of Air Accidents, Keith Conradi, comments:

Accident investigation is a necessary function of an aviation safety system and I am justly proud of the contribution the AAIB delivers. Ultimately our reputation stands on the quality of our investigators and support staff; their passion, drive and complete objectivity in pursuing the reasons that lie behind every tragic event. I have every confidence that as the organisation enters its second century and appoints its 13th Chief Inspector, this will continue undiminished.

Aftre 6 years heading the AAIB Conradi is to become the founding Chief Investigator of the new Healthcare Safety Investigation Branch (HSIB).  As stated in Parliament:

Mr Conradi will bring to HSIB a wealth of experience in safety investigation and a deep appreciation of the importance of maintaining a credible ‘safe space’. He has a thorough understanding of the role of Chief Investigator and a vision for how HSIB will improve the standard of clinical investigations at the local level.