Leonardo AW139 A6-AWN, operated by Abu Dhabi Aviation (ADA), made a precautionary ditching off the coast of the UAE near Mubarraz Island on 29 April 2017.  Details are limited but early reports suggest that the ditching was in response to apparent indications of a mechanical failure.  All persons on board were recovered safely.  The aircraft (MSN41213, a long-nose 139 built in the US in 2009) capsized before salvage. 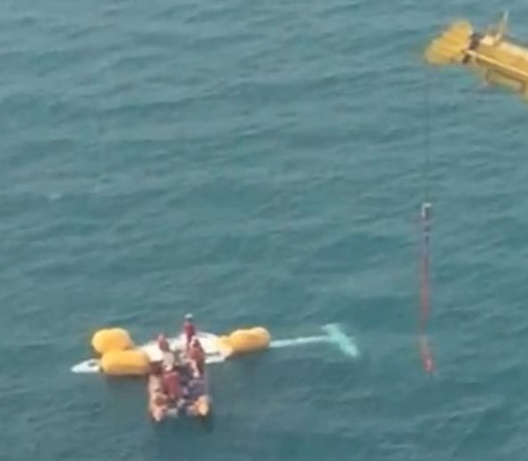 Common themes of the limited amount of (mostly 3rd hand) information available in the public domain describe MGB oil temperature rise and mechanical noise/vibration.  MGB pressure loss or oil loss are not mentioned. Leonardo issued a statement to customers and other stakeholders on 1 May 2017. This occurrence is subject to investigation by the Air Accident Investigation Sector (AAIS) of the UAE General Civil Aviation Authority (GCAA).

UPDATE 7 May 2017: It is being reported that the investigation is focusing on the oil cooler fan. In the EASA certification standard for large rotorcraft, CS 29.917 on design of rotor drive systems states (emphasis added):

CS 29.917 (a) General. The rotor drive system includes any part necessary to transmit power from the engines to the rotor hubs. This includes gearboxes, shafting, universal joints, couplings, rotor brake assemblies, clutches, supporting bearings for shafting, any attendant accessory pads or drives, and any cooling fans that are a part of, attached to, or mounted on the rotor drive system.

CS 29.917 (b) Design assessment. A design assessment must be performed to ensure that the rotor drive system functions safely over the full range of conditions for which certification is sought. The design assessment must include a detailed failure analysis to identify all failures that will prevent continued safe flight or safe landing, and must identify the means to minimise the likelihood of their occurrence.

UPDATE 9 May 2017: The local press report that the helicopter had departed Abu Dhabi International Airport at 12.05, landed on one offshore installation at 12.31 before departing for a second. All POB are reported to have boarded the liferafts.

During the evacuation, the Commander noticed that the Aircraft tended to tilt towards the aft left float. It was identified that part of the aft pillow chamber had delaminated, releasing air from the aft floatation chamber through the pillow inflation valve. A second area of delamination was found at a main chamber seam which was slowly releasing air.  An inspection of the Aircraft identified that the shear bolts holding the upper edge of the float covers in place had not sheared causing fracturing of the float covers with the remains attached to the Aircraft.

The flight crew pulled the emergency raft deployment handles in the flight deck, but only the left raft deployed successfully.

An operational test of the right raft deployment system confirmed operational functionality of the handle and cable mechanism. The raft was subsequently removed to conduct an inspection of the system, confirming the operational serviceability of the mechanism. A functional check of the pressure cylinder confirmed that the raft was serviceable at the time of the Accident. An inspection of the right raft deployment handle revealed that the safety clip was loose and that the handle installation showed excessive lateral play. The failure of the raft deployment is subject to further investigation.

The Copilot reported that when the left [cockpit] window panel handle was pulled as described in the emergency evacuation procedures, the window panel cracked in the area of the pull handle creating a hole in the panel. The Copilot was able to pull the panel inwards by using this hole as a grip point. [This window was not recovered.] After initial difficulties in opening the left flight deck escape window, the flight crew evacuated the Aircraft into the life raft. The passenger successfully opened the cabin escape window and evacuated the Aircraft into the same life raft. The raft floated away from the Aircraft as it became apparent that the Aircraft was not remaining in the upright position [so the commander cut the raft’s tether].

Subsequently the aircraft capsized. The Crash Position Indicator (CPI), or Automatically Deployed Emergency Locator Transmitter (ADELT) did not deploy.  ADELTs have not had a stunning service experience as the UK Civil Aviation Authority (CAA) reported in CAP1144.  In the case of the last AW139 ditching (B-MHJ in Hong Kong Harbour in 2010) the ADELT did activate. 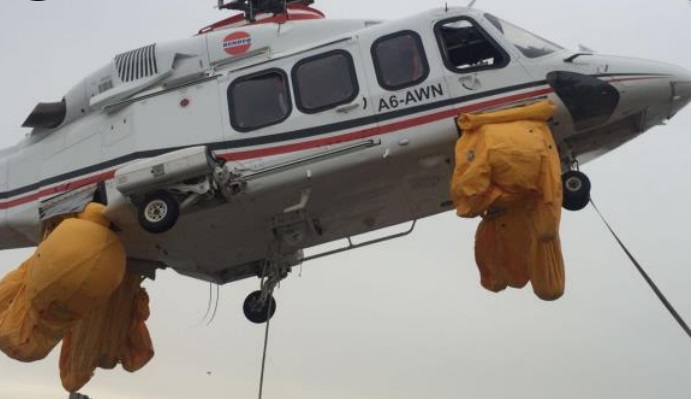 The GCAA say that after salvage of the aircraft damage was found to the MGB cooling system:

The Investigation is ongoing and the investigators say it will include further examination and analysis of:

The Investigation will also conduct an in-depth analysis of the “contextual factors, human factors and organizational factors”. EASA published NPA 2016-01 Helicopter ditching and water impact occupant survivability in March 2016, seeking comments on improvements in the certification of new helicopters that would address several of the potential concerns here.