Bell 206B registration SE-HOM, operated by Fiskflyg, was engaged in a periodic Operator Proficiency Check in the vicinity of Porjus in Sweden on 8 November 2012, when an accident occured. The Swedish Accident Investigation Board (Statens Haverikommission [SHK]) published their final report on 3 July 2014.  They reported:

The helicopter remained upright with no injuries to the two occupants. 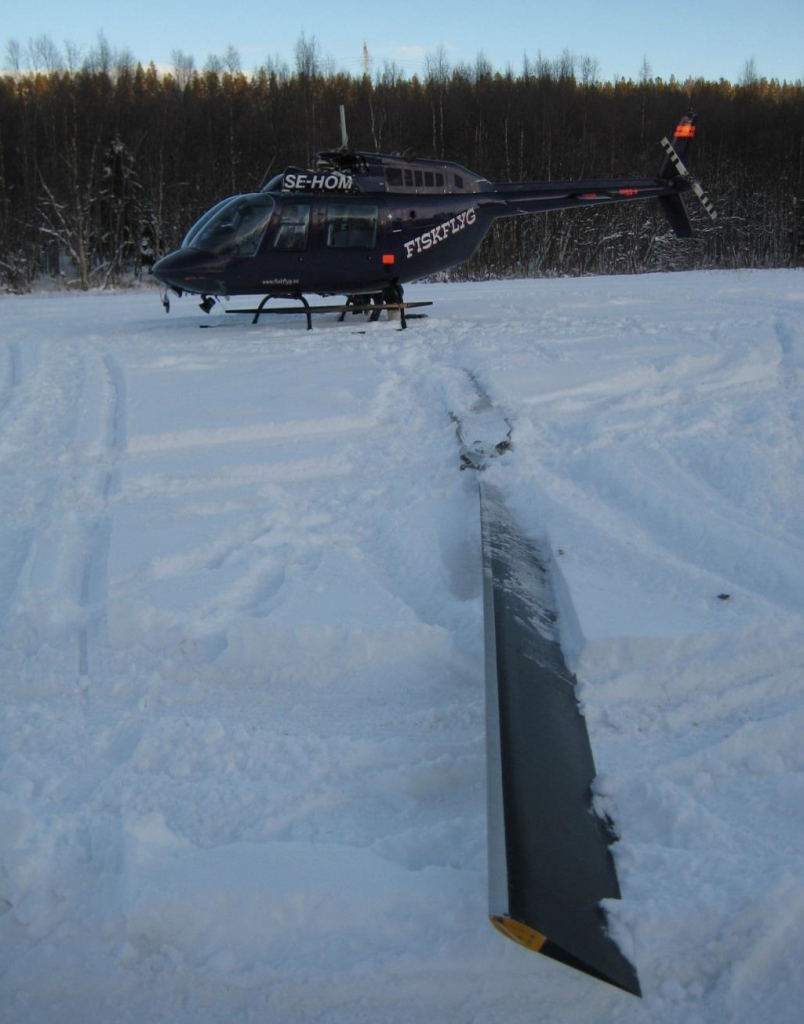 The SHK concluded that: SHK went on to report:

It is likely that the free wheel released as intended during previous autorotations, but did not engage when the free turbine speed was to meet the rotor speed at the same time as the rotor geared down. If the speed of the free turbine was significantly higher than that of the rotor when the sprags engaged, possibly faster than normal, an additional dynamic moment arose. The energy that was stored up in the engine and transmission was braked by the inertia of the main rotor, whereby the moment on the mast exceeded the fracture strength.

The 1.4 x 4.2 mm debris in the restrictor was considered to be routine ‘build debris’, from when the gear box had last been opened for maintenance, namely:

…sealant material that has been used between the cover and the transmission housing.

Hence the SHK concluded that:

The accident was caused by the design of the freewheel’s lubrication system allowing a contaminant of a size that can occur in a Part-145 shop to block the oil flow to the freewheel.

On 10 January 2013, the Canadian Transportation Safety Board (TSB) reported  on very similar, 13 September 2011 accident, to a Wisk-Air operated Bell 206B, C-GDPE.  During a training flight:

…the student pilot entered a practice 180° autorotation to a planned power recovery. When the student initiated the power recovery, the rotor rpm decreased. The instructor took control and completed an autorotation. The low-rotor-warning horn activated and remained on during the autorotation. The helicopter landed firmly yet not hard enough to activate the emergency locator transmitter. The rotor then struck the tail boom and the mast separated just below the rotor head. The helicopter was then shut down and the crew exited without injuries.

While in this case the main rotor remained attached, damage was still very evident:

The pitch links were wrapped around the mast in a counter-clockwise direction as viewed from above. The pitch links had failed at the upper end at a point coincident with the end of the internal threads. The main rotor mast had failed below the main rotor attachment splines.  In the Canadian case the freewheel lubrication blockage was due to corrosion debris. The main-rotor transmission oil lubricates the freewheel assembly. The oil is filtered and passes through an oil cooler mounted on the transmission. Oil is then directed to the transmission’s oil jets, pressure regulator and a reducer fitting (AN919-6D). The reducer serves as a port to direct oil via a flexible hose to a manifold mounted on the upper deck. The manifold houses a pressure transducer, pressure switch and a restrictor (P/N 206-040-254-001) that incorporates a 0.039- to 0.044-inch orifice…

The restrictor must be inspected during a transmission serviceability check, which is required when metal particles are found on a main-rotor transmission chip plug. To prevent restrictor contamination caused by debris such as particles of cut o-rings from being discharged into the oil system during maintenance to the transmission and freewheel assembly, Bell Helicopter Technical Bulletin 206-79-31 had introduced a filter (P/N 50-075-1) that replaced the AN919-6D reducer. This technical bulletin was optional and had not been embodied.

Bell Technical Bulletin 206L-79-36 addresses a similar concern for the 206L model.  Both were issued in 1979.  This reinforces the value of a Continuing Airworthiness Management Organisation carefully assessing all optional Service Bulletins (or equivalent).

In their report the TSB identified the following

The SHK note that the Australian regulator, the Civil Aviation Safety Authority (CASA) issued an Airworthiness Bulletin making the embodiment of the filter mandatory on the Australian fleet (there had been occurrences of freewheel failures and mast yielding in Australia).  The SHK report incorporates a minor typo: this CASA Airworthiness Bulletin is actually numbered AWB 63-002. Oddly, Aerossurance notes that the CASA bulletin refers to both the 206 (Jetranger) and 206L (Longrager) models but disappointingly only refers to the Bell Technical Bulletin for the 206.

Aerossurance has 15 years of helicopter design & safety experience, including helicopter rotor and transmission matters.  For aviation advice you can trust contact us at enquiries@aerossurance.com