UK CAA to Review IFR Ops Outside of Controlled Airspace

The UK Civil Aviation Authority (CAA) has announced it plans an enhanced review of Instrument Flight Rules (IFR) flying outside of controlled airspace.  This is in response to a UK Air Accidents Investigation Branch (AAIB) recommendation in their final report on a serious incident involving a chartered executive Sikorsky S-76C++ G-WIWI in East Sussex on3 May 2012:

Safety Recommendation 2014-35:  It is recommended that the Civil Aviation Authority review the regulations that permit a helicopter engaged in public transport operations to descend below MSA for the purpose of landing, when flying in instrument meteorological conditions but not on a published approach procedure.

The review will be “broader and deeper” than originally planned based on feedback from the British Helicopter Association and an unnamed on-going accident investigation (most likely AgustaWestland AW139 G-LBAL, which crashed on a night take off in Norfolk in March 2014 UPDATE 11 Oct 2015: We discuss the AAIB report on that accident here: Fatal Night-time UK AW139 Accident Highlights Business Aviation Safety Lessons).

In the S-76C++ serious incident the helicopter descended towards tree tops after a discontinued night approach to a private landing site.  The occurrence gained tabloid press attention because Sir Paul McCartney was aboard.  In their report AAIB concluded:

The descent from above the minimum safe altitude was conducted in reduced visibility and low cloud conditions into an area with limited visual references. The helicopter was therefore brought close to terrain in an environment in which situational awareness could become degraded easily.

The decision to execute an orbit around the landing site, in the circumstances pertaining, further increased the chances of situational awareness becoming degraded, whilst the helicopter was at low height above unlit and undulating terrain.

In the course of the orbit, the commander became spatially disorientated and the helicopter descended towards the tops of trees. Although the EGPWS issued warnings that the helicopter was approaching contact with the ground, the flight crew were not aware of these warnings. 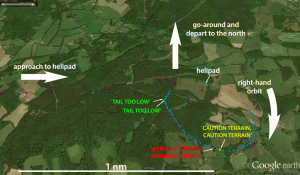 The CAA review will be ‘multi-disciplinary’ and currently only may involve industry.  It is due to report in October 2015.

Aerossurance recently covered two Night Time HEMS Accidents in the US in March 2013.