Dutch Safety Board Investigation: “Medical Assistance on the North Sea”

The Dutch Safety Board (DSB) has issued their investigation following the death of a sports diver in the North Sea on 11 July 2015.

Two sports divers were diving on a wreck 18km offshore.  One fell ill and was recovered from the water unconscious.  An emergency call was made to the Netherlands Coastguard for assistance.  The DSB say:

By helicopter and ambulance the diver was finally transferred to a hospital in Antwerp, where the victim died that same evening.

… investigated the manner in which the assistance was organised and coordinated, as well as how the various parties involved coordinated their actions. The Board also focused on the organisation of medical assistance on the North Sea in general.

Details of the Rescue

A number of assets were deployed, the DSB say the Coastguard Centre did not keep “a grip on events”, partly due to multiple communication difficulties.  Consequently the patient was transferred to a SAR helicopter (contracted from NHV) that did not have medical personnel on board.

The Coastguard Centre liaised with the Netherlands Radio Medical Service, whose main role is to provide medical advice to ships in Dutch waters but ‘did not receive a concrete answer’ on where the patient should be taken.  After 10 minutes of negotiation, the Academic Medical Centre in Amsterdam refused to accept the patient due to lack of capacity.  Despite urgent requests from the SAR helicopter, no firm plan emerged from the Coastguard Centre.  Consequently the SAR Helicopter Commander made the decision to transfer the patient to the Erasmus Medical Centre in Rotterdam, arriving with only a few minutes warning.  Later in the day the patient was transferred by road to University Hospital Antwerp in Belgium, which had a hyperbaric chamber.  The patient died that evening.

There are systematic shortcomings in how medical assistance is provided on the North Sea, which can lead to sick and wounded people not receiving effective, safe and prompt care.

The Coastguard’s current process organisation is not appropriate for providing emergency medical care. 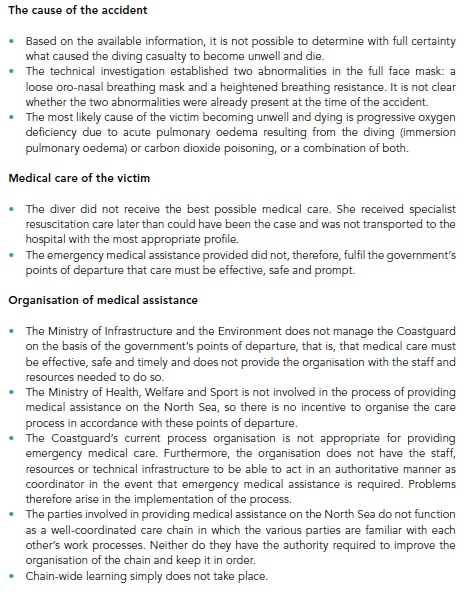 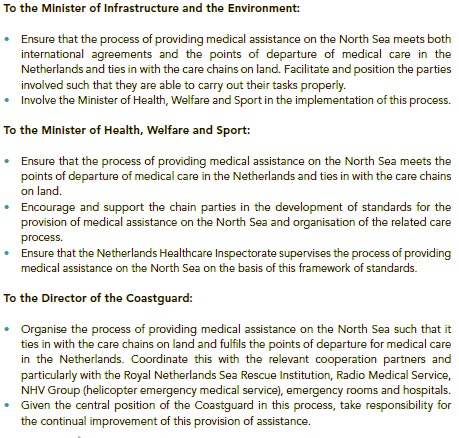 This incident is a reminder that SAR assets needs to be properly supported.  The Flight Safety Foundation (FSF) Basic Aviation Risk Standard for Offshore Helicopter Operations (BARSOHO), launched in May 2015, is orientated around a risk bow-tie, contains a number of common and specific threat controls. While focused primarily on offshore helicopter transport it does also address other associated services, included contracting for SAR. 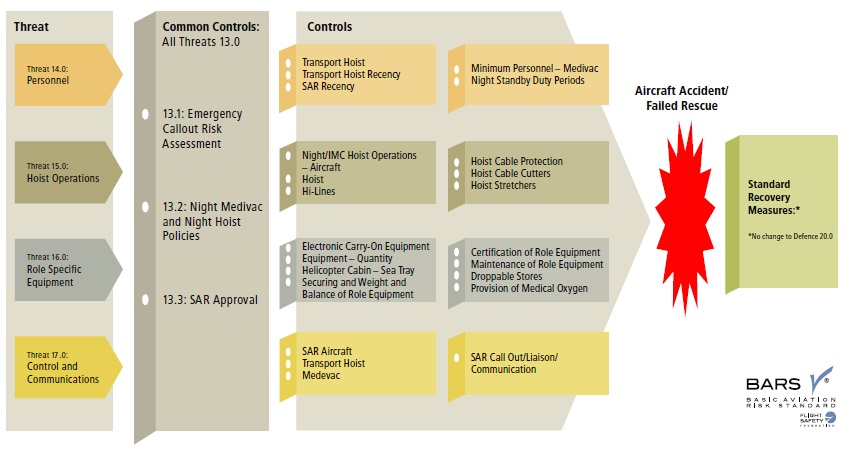 The whole BARSOHO standard is freely available with an accompanying implementation guide.

UPDATE 1 February 2017: BARSOHO Version 3, fully aligned with the HeliOffshore SPM, is issued and available.  It contains a small number of revisions to the SAR/Medevac requirements.

You might find this article of interest: Medevac Misadventure – Inquest in the Yukon