The first meeting was held last week of a new European Aviation Safety Agency (EASA) Rule Making Team (RMT.0608) on helicopter gearbox lubrication.  The Terms of Reference (ToR) and Group Composition (GC) are here. This activity follows European/US/Canadian dialogue after the loss of Cougar Sikorsky S-92A C-GZCH Flight 491 off Newfoundland, Canada on 12 March 2009 in which 17 people died, although one passenger, Robert Decker, survived.

The Canadian Transportation Safety Board (TSB) reported on that accident in 2011. 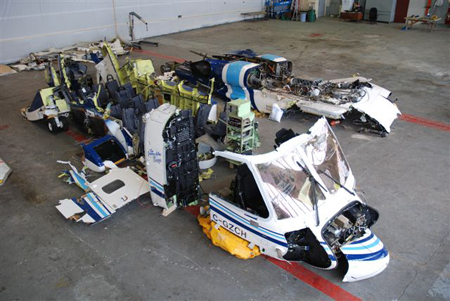 Following the loss of lubricant test resulting in catastrophic failure, instead of taking steps to redesign the transmission to provide a 30 minute run dry capability [sic: this term is not used in regulation] for the MGB, Sikorsky re-visited the requirements of Part 29.927(c)(1). Relying on guidance from AC 29-2C and the FAA [Federal Aviation Administration] Rotorcraft Directorate, Sikorsky and the FAA concluded that, except for a potential failure of the oil cooler and its exterior plumbing, all other MGB failures leading to a total loss of oil were extremely remote.

Just one day before that certification, another Sikorsky product, an S-61N C-FHHD, was involved in an accident in Canada after a loss of main gear box oil, which should have helped demolished the fallacy that oil loss from any where other than the oil cooler was remote and allowed time for a rethink before the type entered service in 2004.

The fatal failure in Canada and a serious incident in Australian in August 2008, further highlighted that claim of ‘extremely remote’ failures and Black Hawk experience was a fallacy as the component that failed, the oil filter, was configured very differently to the smaller military Black Hawk.  Consequently the bypass system had no benefit in the and in the Canadian S-92A accident drive to the tail rotor was lost approximately 10.5 minutes after the oil pressure warning, fairly consistent with the time to failure in the original, failed, August 2002 test.

UPDATE 2 February 2016: Other manufactures have had more design success: Airbus (nee Eurocopter’s) approach is described in this 2003 paper: Loss of Oil Behavior of Eurocopter Gearboxes from AS350 to EC225.  Finmeccanica (now Leonardo’s) approach on the AW family is described here: Leonardo Strives For Greater Gearbox Loss of Lube Capability

Aerossurance has over 15 years of helicopter design & safety experience, including helicopter rotor and transmission certification & continuing airworthiness expertise.  Our founder is a former JAA Rotor & Transmission Specialist, was part of the industry Aviation Safety Review Team formed immediately after the Newfoundland accident and in particular provided the helicopter type airworthiness analysis in the team’s Return To Service Assessment Report.

For airworthiness advice you can trust contact us at enquiries@aerossurance.com