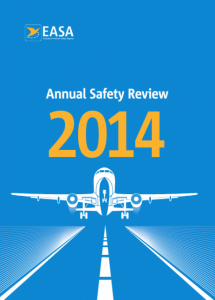 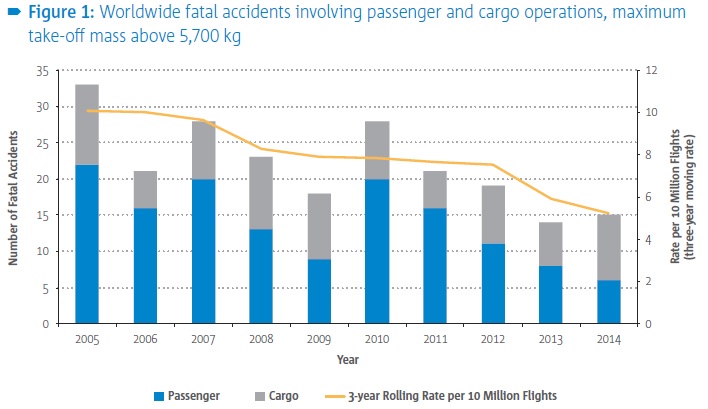 2014 has been a very challenging year for the European Aviation Safety Agency (EASA) and for aviation safety in general. The disappearance of Malaysia Airlines MH370, the dramatic loss of MH17, the crash of Air Asia [Indonesia] QZ8501 and the radar interferences over central Europe have reminded us that the safety of passengers can never be taken for granted.

In the 32 EASA Member States (the 28 European Union Member States plus Iceland, Liechtenstein, Norway and Switzerland) there was one fatal CAT Aeroplane accident (MD-83 EC-LTV operated by Spanish airline Swiftair in Mali on 24 July 2014, resulting in 116 fatalities).  There were 26 non-fatal accidents (up from 22 the previous year) and 66 serious incidents (down from 74).

In the EASA Member States, no more than one fatal accident CAT Aeroplane accident has occurred per annum since 2005 (with none in 2010 and 2013).

EASA has identified the 5 top risk areas for  CAT Aeroplanes as:

Interestingly Controlled Flight into Terrain CFIT does not make the list.

EASA say 2014 was a better year for CAT Helicopter safety:

Based on the past fatal accident history the top 5 helicopter risk areas, in descending order, are SCF, LOC-I, CTOL, CFIT and ARC (although Low Altitude Operation, LALT and ARC are very close).

Patrick Ky also noted the agency is moving to a “more proportionate and performance-based approach to safety” with an reorganisation that creates :

A new Strategy and Safety Management Directorate…to develop a single, more transparent, evidence-based and data-driven strategy, which will drive the Agency’s work programme. The rulemaking activities were incorporated into ‘operational’ directorates, in order to increase synergies and to benefit from a better and direct operational feedback.

The initial version of the Safety Risk Portfolio for Offshore Helicopters is shown below. 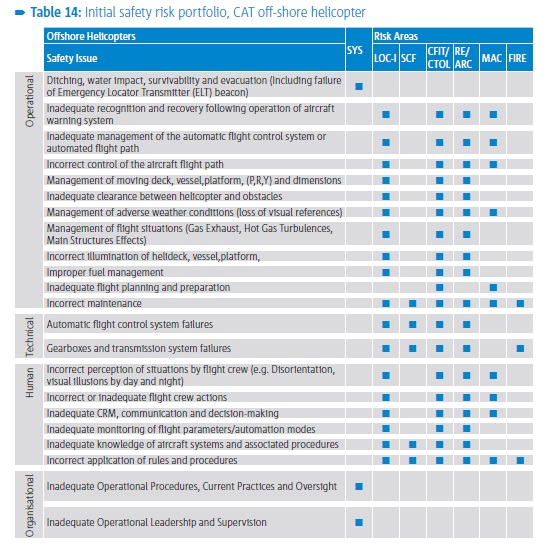 This has been further developed since the deadline for the Annual Safety Review publication.  The latest version was discussed by the European Helicopter Safety Team (EHEST) at its last meeting at Helitech in London earlier this month.

The EASA approach to risk is described in more detail in Chapter 2.

In relation to safety reporting EASA note that:

Mandatory Occurrence Reporting (MOR) is currently regulated, inter alia, by Directive 2003/42/EC. As of November 2015, the directive will be replaced by  on the reporting, analysis and follow-up of occurrences in civil aviation, amending Regulation (EU) No 996/2010 of the European Parliament and of the Council. While some of the basic existing elements of the current MOR scheme are maintained there are some key differences.

At the end of 2013 there was a total of 800,614 occurrences reports in the European Central Repository (ECR), which uses ECCAIRS software. This rose during 2014 to 953,633. There remains however issues with the quality of the data in the reports being supplied.  In 2014, the average number of occurrence reports that were being integrated daily into the ECR by Member States was 398; being very close to the value recorded in 2012 but less than the value recorded in 2013 (nearly 500).  No reason is apparent for the change in 2014.  EASA do note that:

The topic was discussed further by EASA at Helitech.

Aerossurance also first discussed Performance Based Regulation in 2014 and again this year.

The Flight Safety Foundation’s 68th International Air Safety Summit will take place in Miami Beach 2-4 November 2015.   In his keynote speech Delta Air Lines CEO Richard Anderson will discuss building and maintaining a culture with safety as the most important focus, and how to ensure that this culture resonates at all levels of the organization.

The Royal Aeronautical Society (RAeS) Human Factors Group is staging a conference 26-27 November 2015 at Virgin Atlantic Airways at Crawley, near London Gatwick entitled: Predicting the Fatal Flaws – Can we do things differently in aviation safety?.