On 5 October 2016 Tamarack Helicopters (Bell) UH-1H N175SF, operated on a Part 137 agricultural aerial application flight by Farm AG Enterprises under a restricted certificate of airworthiness, rolled over during a forced landing near Gila Bend, Arizona, after the 90° tail gearbox (TGB) separated. 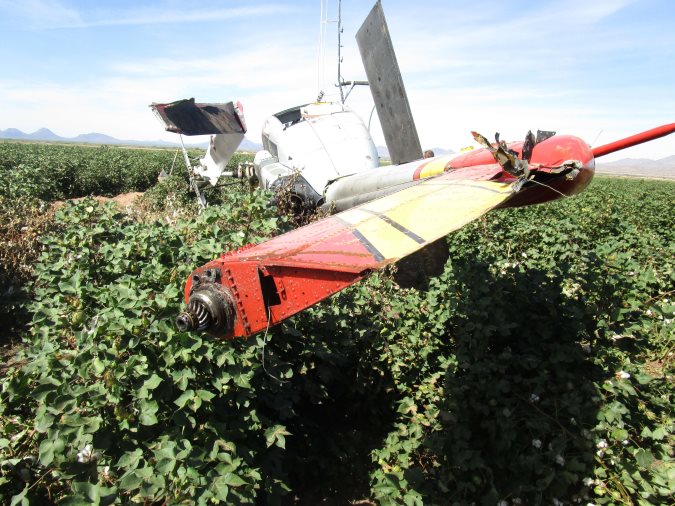 The pilot, the sole person, onboard sustained minor injuries. The US National Transportation Safety Board (NTSB) say in their safety investigation report that:

The pilot reported that he had just completed a series of passes over a cotton field, and was maneuvering the helicopter for a return to the fuel truck.

The helicopter was moving at about 20 knots and climbing, when after reaching about 100 ft above ground level he heard a loud bang.

The helicopter then began to spin to the right, and would not respond to foot pedal inputs, so he lowered the collective and initiated an autorotation. The helicopter was still spinning as it descended, and as it approached the ground the skids made contact with cotton bushes, and the helicopter rolled onto its left side.

The tail rotor assembly and TGB was found 30ft from the wreckage. 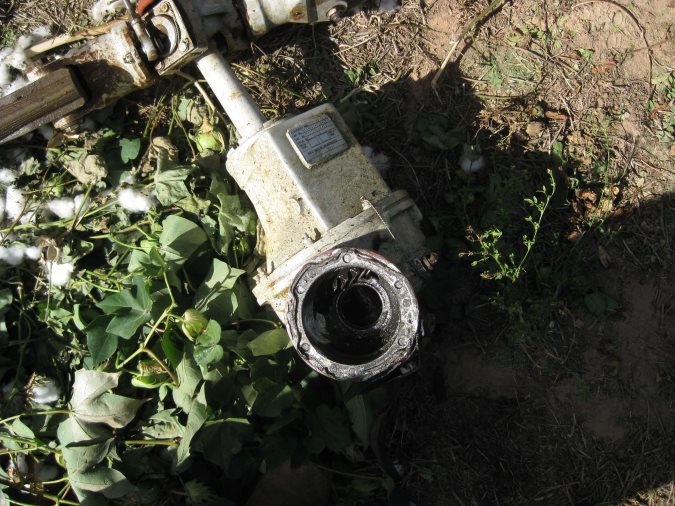 The input quill and sleeve assembly remained attached to the vertical fin.

A representative from Tamarack Helicopters stated that the 90° gearbox is typically removed and overhauled after 1,200 flight hours, or if grey material indicative of fretting is observed at any of the gearbox mating surfaces.

Examination revealed that the six studs which attached the gearbox case to the input quill sleeve assembly on the fin had fractured at the gearbox housing joint line. 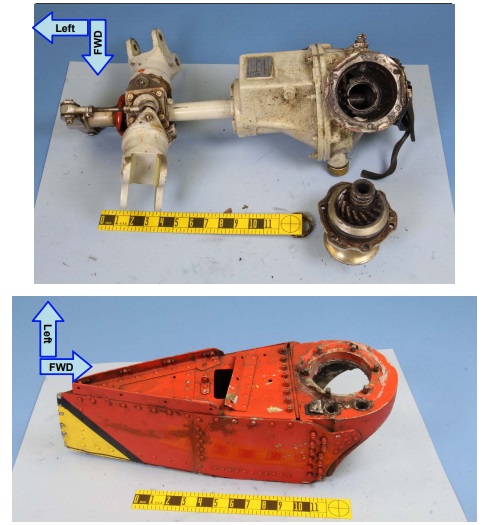 The threaded portion of the fractured studs remained within the gearbox case. All six stud fracture surfaces displayed topographies and arrest lines indicating bending fatigue cracking. In each case, the fatigue initiated in the thread root radii on the same side of each stud relative and perpendicular to the center of the bolt hole radius. 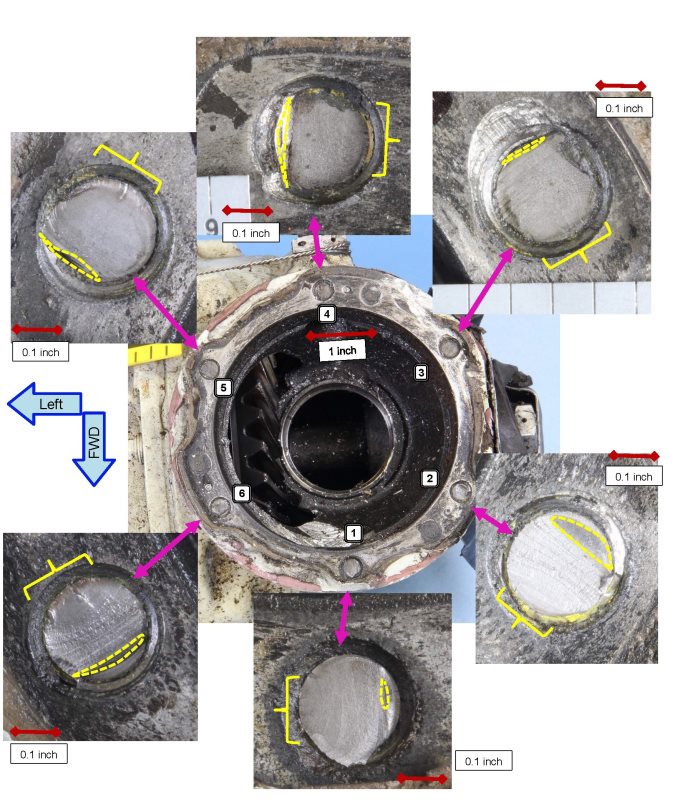 The fatigue cracks propagated diametrically across each stud terminating in small overstress regions, with a small area of secondary reversed bending fatigue cracking at the opposite side of each stud. Magnified examinations of the corresponding stud sections from the vertical fin revealed fracture areas with fatigue cracks that had initiated at either the first, second or third full thread from the grip portion of the stud. The thread roots were smooth and typical of rolled thread roots, and yellow paste material consistent with zinc chromate paste was present in all thread roots. The fatigue cracks penetrated between 89% and 98% of each stud cross section.

They then failed in overload.

Fatigue is typically the result of insufficient preload in the fastener often due to insufficient torque during installation or by the loss of preload after installation. Fretting wear on the studs and in the holes indicated that there were small amounts of relative movement between these components and thereby also indicated insufficient preload. However, the interface between the input quill housing and the vertical fin showed no significant fretting or wear. The locations of the main fatigue origins in the studs and the fretting location between the studs and fin holes were both consistent with normal torsional loads in the tail rotor drive system. The studs exhibited a large percentage of fatigue penetration before final stud separation and relatively small overstress zones. These signatures are indicative of a low mean stress and a large number of small tail rotor inputs (loads) consistent with repetitive aerial application flight profiles.

The representative of Tamarack Helicopters stated that:

…fretting damage to one or two attachment studs along with associated ovaling of the pass-through holes on the vertical fin structure was not uncommon (and that maintenance documents exist for quantifying and repairing such damage), but he has never seen damage to all mounting studs before.

The NTSB database contained two previous accidents involving similar failures on ex-military UH-1Hs. Both were flying in the restricted category, one for logging, the other for fire-fighting but both “in highly repetitive cycle work that would require significant tail rotor inputs”:

A gearbox separation with similar fatigue damage to the gearbox attachments studs occurred on September 21, 1999 involving a Garlick Helicopters version of the UH-1H, which was being utilized for logging operations. The probable cause was determined to be, “Fatigue failure of the 90-degree gearbox attachment studs, resulting in separation of the tailrotor and 90-degree gearbox from the vertical fin”. See NTSB accident number SEA99LA171.

On October 7, 2012 the tailrotor gearbox separated from a Garlick Helicopters UH-1H during firefighting operations with a Bambi bucket. Data was limited because the gearbox and four studs were not recovered. The NTSB materials laboratory report indicated an uneven use of sealant at the gearbox mounting flange, and a resultant lack of mounting bolt preload. The probable cause was determined to be, “The separation of the tail rotor gearbox and tail rotor assembly as a result of fatigue to the tail rotor gearbox input quill assembly attachment studs.” See NTSB accident number WPR13FA006.

[A]fter military service it was demilitarized, and ownership transferred to the Sheriff’s Department of Seminole County, Florida. FAA records indicated that a condition of transfer was that the helicopters sole purpose be restricted to, “Airborne Fire Suppression, Air Search and Rescue, water/Marine Rescue, Disaster Response, SWAT Response, Medivac, Regional Support”.

In 2007, the helicopter was then sold to a private company which specialized in charter, forestry, and contract flight services. In January 2014 it was issued a special airworthiness certificate in the restricted category after being disassembled and converted through a supplemental type certificate (STC) held by Tamarack Helicopters. The helicopter was purchased by the accident operator on April 4, 2016, 279.1 flight hours after the conversion, and 20.4 hours before the accident. The FAA registration database lists about 450 UH-1H’s currently registered in the US.

The NTSB note that the UH-IH:

…was never made commercially available. As such, individual owners and companies were responsible for certification and continued airworthiness of this and other surplus military aircraft.

These organisations are regarded as the Type Certificate Holder (TCH) by the FAA not Bell.  The NTSB report that there are at least 12 companies listed on different Type Certificate Data Sheets (TCDS) as TCH’s for different individual UH-1Hs.  The individual aircraft are only eligible for a restricted category certificate of airworthiness with tight operational limitations specified.

It is an interesting question whether most of these TCH’s really have the data and competence to manage this design airworthiness matters of ageing ex-military rotorcraft in niche roles.

The NTSB make no comment on how the agricultural mission was assessed from a fatigue spectrum perspective and no comment on the TC Holder’s design competence.