In a bizarre rail accident, three Boeing 737 fuselages, being transported from the Spirit AeroSystems Wichita factory to the Boeing assembly line in Seattle, were left at the bottom of a ravine in Montana on 4 July 2014.  None of the train’s crew were injured.

Of the 90 cars of the BNSF Railway train, 19 derailed, 18 miles east of Superior, Montana.  Thirteen of the cars that derailed were carrying freight, mostly aircraft parts with some soybeans and denatured alcohol. Six were empty. The train was carrying six complete 737 fuselages, fuselage panels for the 777 and wing parts for a 747.   All six cars with the 737s were derailed, two fuselages were partly submerged in the Clark Fork River.

A Boeing spokesman stated they have:

…deployed experts to the scene to begin a thorough assessment of the situation. Once we determine the extent of damage we will assess what, if any, impact there will be to production.

Spirit has been delivering Next-Generation 737s from Wichita since 1998. The company builds the 737 fuselage, engine struts and nacelles in Wichita and wing components in its Tulsa, Oklahoma facility.

This is not the first time that business continuity and Boeing’s supply chain has been threatened.  In June 2011, a BNSF train derailed in Nebraska after being hit by a tornado, damaging 737 fuselages on board (video 1m 40s onwards).  On 14 April 2012 an EF-3 tornado struck Spirit’s main factory in Wichita, resulting in 9 days lost production.  In that case, Boeing were able to recover, without delaying a delivery.

Spirit AeroSystems has been working closely with our customer since we learned of the incident and continue supporting as needed. The Spirit team’s resolve was tested with an even greater challenge as recently as the 2012 Wichita tornado. We are confident that, working together, we will overcome whatever challenges may be presented.

In the Puget Sound Business Journal there were two helpful articles on 7 July 2014:

Are these Boeing fuselages totaled? That’s a complicated question

Aerospace eBusiness published this item that will help you consider Aerossurance‘s response time!: When Aerospace News Happens on the Weekend…

During week commencing 21 July 2014 personnel from Pacific Steel and Recycling have been breaking up the 737s on site.  While other parts appear to have been salvaged )or at least relocated for evaluation) all six 737 fuselages it appears have been scrapped. 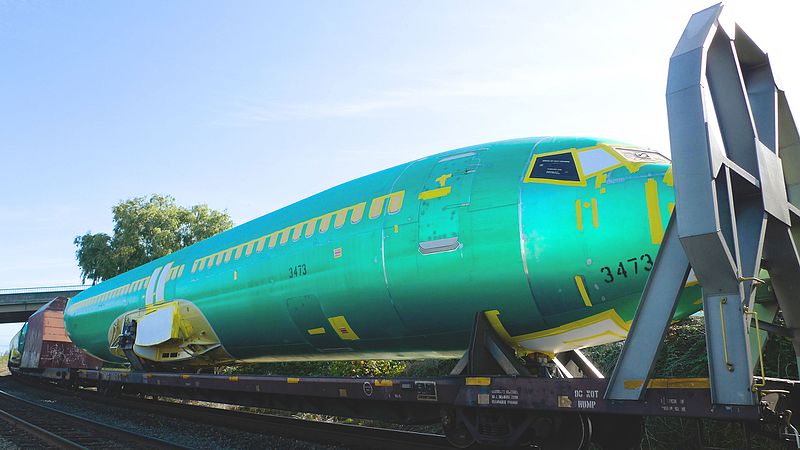 Boeing 737NG fuselages on train flatcars, being shipped to the Boeing factory at Renton, Washington (Credit: Dan Bennett CC BY 2.0)