In a press conference update on progress with the MRJ regional jet, Mitsubishi Heavy Industries (MHI) has confirmed, as anticipated,  a two-year delay to the programme.  The first MRJ90, the 90 seat version, is now expected to be delivered to launch customer All Nippon Airways (ANA) in mid-2020.

This is not the first delay in the programme.  So far there have been 5 slips in the delivery schedule, totalling 5 years.

The prototype first flew on 11 November 2015, but a year later there was a major reorganisation in the programme to try to restore order. 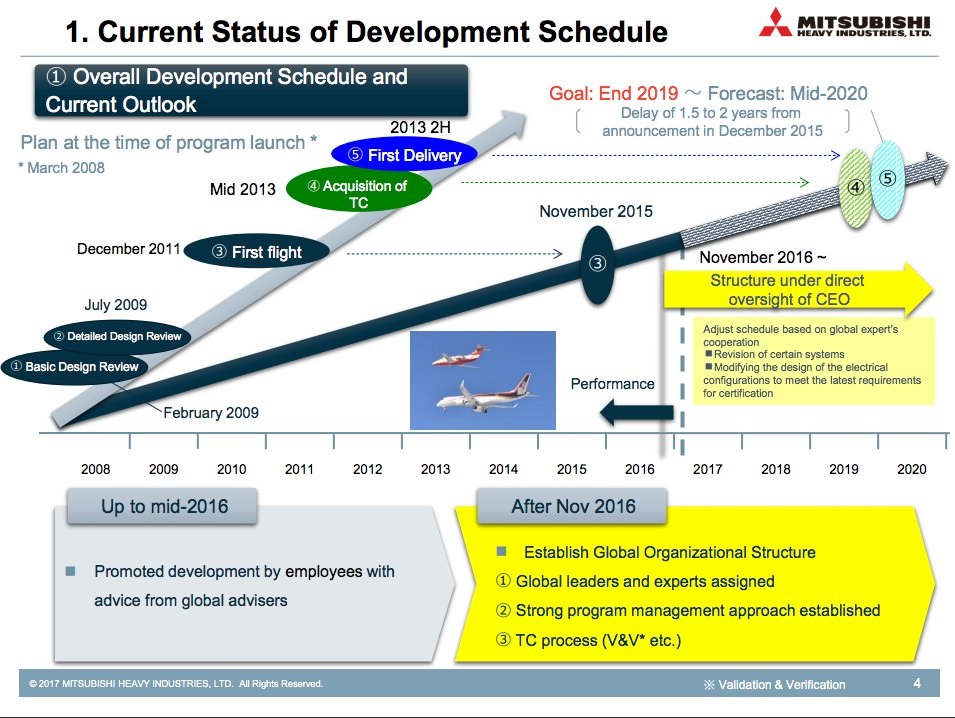 In a joint statement MHI and MAC said:

The change is due to revisions of certain systems and electrical configurations on the aircraft to meet the latest requirements for certification.

They say that the revisions will not affect the aircraft’s structure, its performance, or system functionality.

Flight tests are currently under way in the US at Moses Lake, WA.  The MRJ90 is now expected to obtain type certification in mid-2019.

Mitsubishi has commitments for 427 aircraft, comprised of 233 firm orders, 170 options and 24 purchase rights.

The MRJ will be the first airliner designed and produced in Japan since the NAMC YS-11 in the 1960s.

Although the MRJ’s customers in the USA may express their frustration, the fresh delay does not significantly inconvenience them, as pilot scope clauses will prevent its deployment there until 2019 at the earliest.

However, the real worry for the fledgling airframer is the competitive advantage it is ceding to rival Embraer. The MRJ should have had a seven-year head-start over the E175-E2, but assuming current schedules hold, that has now been whittled down to just 12 months.

UPDATE 31 January 2017: The company plans to boost the number of engineers at its Seattle facility from 150 to 200.  Additionally:

ANA, Japan’s biggest airline, said last week it was “disappointed” at this latest delay, but will continue to support the development of the jet as its launch customer. The carrier will maintain its order of 25 planes, including options, it said.

St. George, Utah-based SkyWest Inc., which has placed an order for 200 planes including options, said last week that its firm orders for the MRJ aircraft “remain unchanged” and are dependent on flying contracts and scope availability. Bridgeton, Mo.-based Trans States Airlines Inc., which has 100 MRJs on order, said in an e-mail that it was “disappointed” by the additional delay.

UPDATE 21 August 2017: The second prototype suffered an engine failure during flight test in the US which resulted in a temporary pause in flight test.

The project has flown:

…four flight-test airplanes a total of some 1,500 hours [and] more than 50 percent of their duties ahead of expected certification in late 2019.

….while production crews had attached wings and begun painting the fifth flight-test airplane.

Meanwhile, another six airplanes have entered various stages of assembly, laying the foundation for a plan to accelerate production “in a phased manner” until eventually reaching a rate of 10 per month.

…one of the aircraft’s few customers, Eastern Airlines, appears to be close to reversing its commitment.

In July 2014 Eastern signed an MoU for 20 firm MRJ90s plus 20 options, but the carrier was acquired by Swift Air in 2017, and many suspect the new buyer is unwilling to wait for the MRJ.

Deliveries of the aircraft, which had been slated for the middle of this year, will now be pushed back until after the fiscal year ending March 2022, the manufacturer said Thursday, adding that it was taking a ¥496.4 billion ($4.5 billion) charge on the program.

“We have made significant changes to our organisation and improvements in the way we do business,” the company says on 6 February. “We have also made a myriad of changes to the design of our aircraft.”

“With the completion of aircraft 10010, we now have a baseline certifiable design that will allow us to achieve certification and set the stage for the future of the SpaceJet family of aircraft,” Mitsubishi Aircraft says. “However, as we evaluate the impact of all these changes, it has become clear that we will not achieve certification in FY2020.”

Aircraft 10010 has been conducting ground tests at Nagoya and is “in final preparations for first flight”, after which the aircraft will join the flight-test fleet in the USA.

The Mitsubishi Aircraft US headquarters in Renton will close and flight test operations in Moses Lake will cease with only a token number of employees remaining to store and maintain the four flight test aircraft there.  The regional jet programme had at one point supported about 400 jobs flight testing the initial M90 model in Moses Lake, along with 200 jobs in Seattle at Mitsubishi’s US partner AeroTEC, which provided testing, engineering and certification support.  MHI earlier announced a net loss of US$275 million for the fiscal year ending in March. Management deemed that not acceptable as it faces the pandemic-driven downturn affecting all of Mitsubishi’s aviation operations, including its supply of major parts for Boeing jets. The results also showed the SpaceJet bleeding cash, with development costs of US$1.3 billion in the last fiscal year.

In other words the company is abandoning ‘the solution’ they had previously introduced of adding experience overseas workers into the organisation.

Mitsubishi Heavy Industries said on Thursday it was freezing its SpaceJet passenger jet program, slashing the annual budget to just one-tenth of current levels over the next three years and foregoing a plan to obtain regulatory approval in a dramatic scale-back of the project it hoped just a year ago would become a key revenue pillar.

The coronavirus pandemic has hit the sector just as Japanese heavy machinery manufacturers had shifted to aviation as a new source of revenue amid competition from shipbuilders in South Korea and China.

A key slide from their media briefing is here. 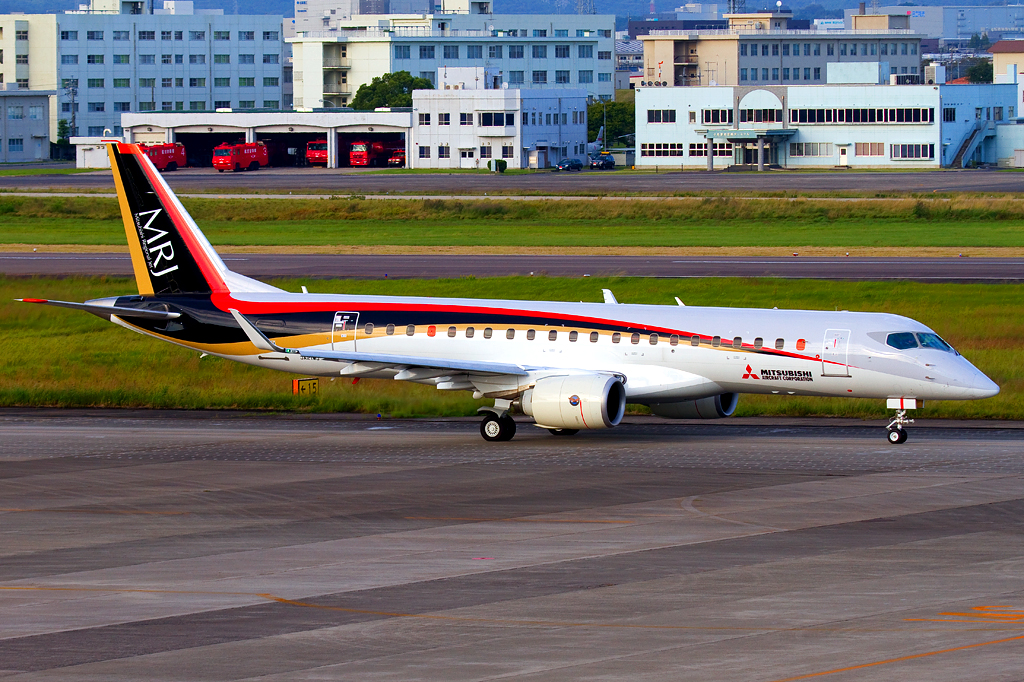