The sales team from Swiss aircraft manufacture Pilatus must be feeling pretty pleased with their performance at the European Business Aviation Conference and Exhibition (EBACE) in Geneva last week, selling 3 years of production.  In all, the company took non-refundable deposits for 84 aircraft.  It was a deliberate decision only to market the 2017-2019 production slots, no doubt a neat way to encourage a future sales frenzy (perhaps at the show in the US in November 2015?). The first customers included:

Company Chairman Oscar Schwenk said: “EBACE 2014 delivered an incredible vote of confidence in Pilatus and our new business jet. Customers who opted for the PC-24 include both prestigious fleet operators and individuals of international stature such as Peter Brabeck, Chairman of the Board of Directors of Nestlé – to name just one. This is a huge source of motivation for us all and I can assure you that we will do our utmost to drive the PC-24 project ahead as planned.“

The PC-24 is an intriguing new aircraft.  It’s a twin engine business jet priced at $8.9 million (in 2017 dollars).  It can seat 6-8 in business configuration and up to 10 in high density seating. But it is more than just another business jet.  The PC-24’s unique selling point is mission flexibility.  It has with good field performance and a modest 81kt stall speed, capable of operating from 2,690ft / 820m strips, with a unpaved strip capability, giving access to 12,0o0 paved and 9,000 unpaved strips according to Pilatus.  It has a pallet-sized 51x49in / 1.30×1.25m PC-12 style cargo door and a flat-floor 501ft³ / 14.2m³ cabin, ideal for cargo, medevac missions and installing special mission equipment.

Aerossurance is convinced this is a versatile aircraft type that will make its mark in the oil & gas and mining sectors (among others).

Rollout of the first PC-24 is scheduled for 1 August (Swiss National Day) at the Pilatus factory in Stans.  On the same day the company will celebrate its 75th anniversary. The PC-24’s first flight is planned early 2015 with EASA certification and entry into service in early 2017.

The Pilatus business model is to always have one new product in development in order to maintain continuity for their design team.  So as the PC-21 military trainer started flight test, preliminary design of what became the PC-24 commenced.  Pilatus have typically alternated military and civil projects in the last 20 years.

What next?  An smaller aerobatic elementary trainer to take on SF260TP and the Grob 120?  Or perhaps they will break the cycle and target another civil aircraft. With the PC-12 and PC-24 neatly covering niches in the utility/corporate sector with an emphasis on flexibility and short field performance, perhaps Pilatus will look at the 19 seat sector.  Certainly if reasonable performance from short and basic airstrips is required the choice there is limited.  In fact very limited for new production aircraft.  As the B1900D is no longer in production that leaves the Viking (nee DHC) Twin Otter, Let 410 and RUAG (nee Dornier) 228.  While all have been updated, essential two have certification bases from the 1960s and the 228, from the early 1980s.  A sector ripe for a shake up? 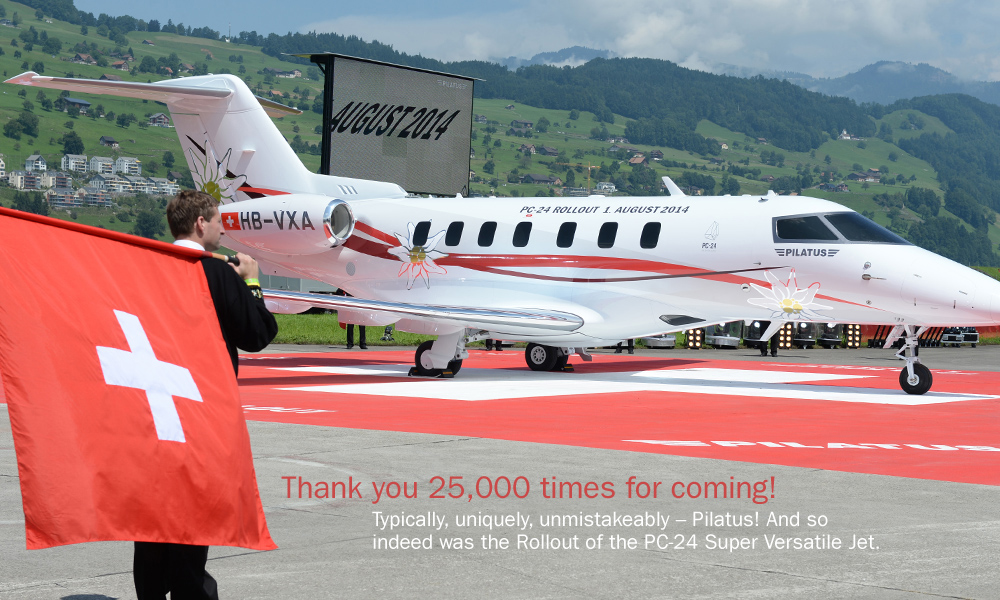 Oscar Schwenk, Pilatus chairman, says the programme is “going great”, with its maiden sortie tentatively scheduled for March next year.

The initial prototype will be used for envelope expansion work “from the very beginning” says Schwenk. “The design is OK as far as we can tell, but you only find out for sure when you are airborne. We want to open all corners of the envelope and see what happens.”

A second PC-24, to be used for systems testing, will roll off the assembly line in Stans in around February 2015, and a third aircraft will arrive after a further six months.

Not all is proceeding entirely to plan, however. First flight has slipped by a quarter – although Schwenk waves this off as “nothing” given the context – and the jet is, by his own admission, too heavy.

By how much, he declines to say, save for noting that “we are still within the limits of the never exceed weight, but we want to be better”. Efforts to shed excess mass are still ongoing, he says, but points out Pilatus has two years in which to achieve its target. Besides, he adds, weight loss programmes can eventually become a price-sensitive issue.

“When you are building an aircraft, every day is a compromise. Either you are too heavy, or not fast enough or you are not innovative enough on the avionics.”

Certification and first delivery of the PC-24 is expected in early 2017.

UPDATE 4 November 2015: Business & Commercial Aviation published an article Pilatus Designs The PC-24 To Do Everything

The first aircraft, P01, is appearing at the show before flying to Spain for high-speed testing, while P02 has flown to the U.S. There it will undergo autopilot trials with Honeywell in Phoenix, and cold-soak tests in the chamber at Eglin Air Force Base in Florida. It will return to Switzerland toward the end of the year. A third, production-standard aircraft will make its first flight before the end of this year.

The order book will not be reopened until the NBAA show in Oct 2017, just prior to certification, which has slipped about 6 months.  AINOnline report:

With just over 500 flight hours logged by two prototypes, and with a third due to join the campaign towards the end of 2016, the highly versatile mid-light twinjet is not quite a quarter of the way towards completing type certification, scheduled for around the end of 2017.

UPDATE 19 July 2016: Pilatus Business Aircraft has broke ground on a new 10,900m² facility at Rocky Mountain Metropolitan Airport, Broomfield, CO (its US home since 1996) on 14 July 2016.  The facility, due to open in spring 2018, will become the centre for Pilatus’ completions, sales and support activities in the Americas.  It is reported that:

The facility was sized to accommodate an increase in employment and completions work as Pilatus brings its new PC-24 light jet to market, Pilatus said. The company expects to hire 60 more people, in addition to the 80 already at Broomfield, as it ramps up full production of the jet by 2020.

Tom Aniello, VP of Marketing for Pilatus North America says the first eight PC-24s will be completed in Switzerland.  He says:

After that, only aircraft to be delivered in North and South America will be completed in Colorado. Stans will supply aircraft to the rest of the world.

Over the past 20 years of PC-12 deliveries, approximately 70% of the fleet has been sold into the USA, and we expect a similar proportion of PC-24s will be delivered into this market.

UPDATE 8 December 2017: The PC-24 has gained both FAA and EASA type certification.

UPDATE 7 February 2018: The first production PC-24 was handed over to US factional ownership company PlaneSense. The aircraft is the first of six PC-24s that PlaneSense has on order.

UPDATE 9 May 2019: Pilatus eyes crucial year for PC-24 with sales to resume