We have previously written about the emerging concept of performance based regulation (PBR) and discussed some of the challenges to overcome.

In the document the CAA illustrate their PBR process: 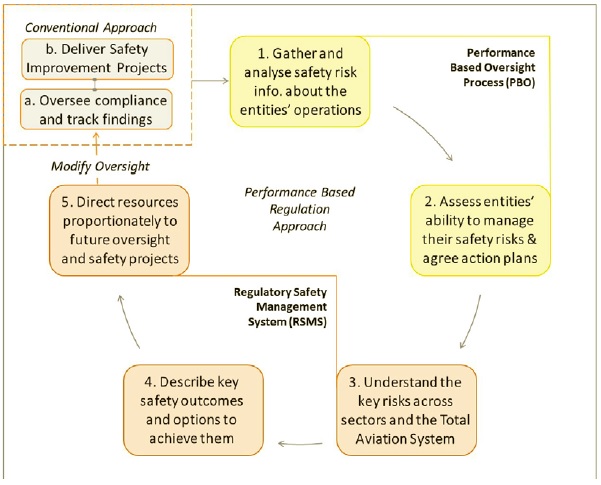 The CAA identify 5 areas of change:

The CAA say they expect that the benefits of PBR to be in three main areas:

1. Improvements in the performance of industry and the CAA to manage and oversee safety risks, and the ability to demonstrate on-going improvements in safety.

2. Improvements in the CAA’s ability to allocate resources to areas with the greatest potential to enhance safety (i.e. better management of resource capacity, competencies and workload against a prioritised set of safety risks).

3. Increased efficiency and effectiveness of the CAA’s core oversight processes, generating the potential for the reallocation of capacity to higher priority areas of safety risk or reducing the amount of people needed to carry out tasks associated with traditional compliance activity.

The consultation is open until the end of the year (see CAP1345 for full details).

UPDATE 21 December 2015: The UK CAA have published a report (CAP1365) on a conference held in London in October 2015 on PBR.  It also described the CAA’s new Regulatory Safety Management System (RSMS) that sits above its Performance Based Oversight (PBO) process.

UPDATE 19 March 2017: The Rule Illusion: Organisations should beware of a ‘rules bias’, a tendency to give in to risk aversion by establishing ever more rules:

Just like in the real world, stricter rules in an organization are rarely effective in stopping the most egregious transgressions.

In practice, those who make the rules are often insulated from the true consequences. The lack of a good feedback mechanism to adjust the rules would be bad enough if the rules were based on evidence and logic. But it’s often even worse, because rules often originate from received (but dubious) wisdom, unproven ‘common sense’, or reactions to one-off events. Rules that are based on beliefs rather than evidence, and never tested, are unlikely to produce net benefits. Yet such rules are precisely the ones the makers feel most protective of. Attempts to budge them meet with the backfire effect. That’s how we end up with sledgehammers to crack a nut.

Many rules were originally intended to be guidelines to help shape behaviour, but instead over time get codified into rigid laws. Often most people in the organization no longer know why the rules were even implemented. And yet depressingly, “Rule Nazis …. They cling to the rules like Leonardo DiCaprio clung to that door in Titanic — as if their lives depend on it. And they make sure everyone else does too, even when the rule doesn’t make sense or stands in the way of productivity,” as Heidi Grant says.

A recent post on the Science For Work blog sets out how important this sense of justice at work really is. Poorly enforced rules can easily undo all the other efforts.

Rules mostly creep in one by one. As their number grows, they contribute to a culture of conformity, rather than one of intelligent judgement and empowered employees who do what is right.

Hence the need to only establish the right rules and still leave room for empowered good judgement.

Aerossurance has extensive experience in safety management, oversight and assurance, aviation regulations and the activity of regulation.  For practical aviation advice you can trust, contact us at: enquiries@aerossurance.com