The Australian Transport Safety Bureau (ATSB) has issued a report on an automation related occurrence:

On 17 October 2012, a Boeing 737-838 aircraft, registered VH-VXB and operated by Qantas Airways Limited (Qantas), was conducting a flight from Adelaide, South Australia to Canberra, Australian Capital Territory… As the aircraft approached 8,000 ft, ATC provided a descent clearance to 7,000 ft and also cleared the aircraft for the approach. As the aircraft approached [approach fix] HONEY it descended below the 7,000 ft altitude clearance limit. After being alerted to this by ATC, the flight crew climbed the aircraft back to 7,000 ft and continued the approach to land.   The ATSB found that, as the aircraft approached 8,000 ft, the auto-flight system vertical mode changed from a flight management computer-derived and managed vertical navigation mode into the vertical speed mode. This was followed by a number of automated, but unnoticed, and crew-initiated changes in the aircraft’s auto-flight system vertical mode. The combination of auto-flight system mode changes and the management of the airspeed during the descent resulted in a high workload environment where the 7,000 ft altitude clearance limit was overlooked by the flight crew.   The ATSB also found that, on receipt of the approach clearance, the Qantas RNAV (RNP) approach procedures allowed the flight crew to remove the current limiting altitude from the auto-flight system’s Mode Control Panel (MCP) and set the decision altitude. Application of this procedure by the flight crew removed the last automated safety system available to them to prevent descent through the current altitude limitation, well before the aircraft was established on the approach. 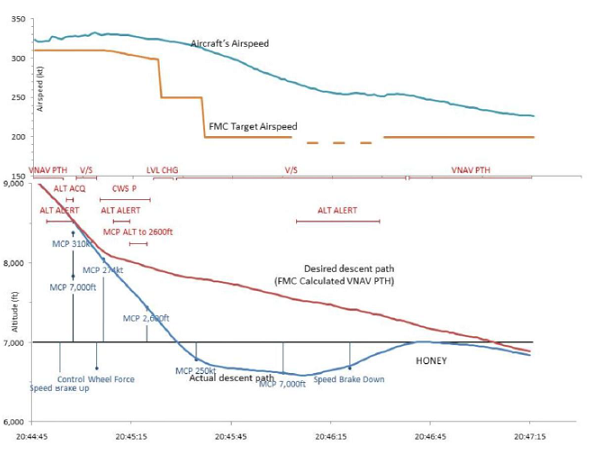 The crew’s focus on managing the increase in the aircraft’s speed due to the high-speed descent and a reducing tailwind, combined with unintended mode changes in the aircraft’s automatic flight system, resulted in a high workload environment.

Due to the workload associated with managing the high airspeed, the flight crew did not identify that the flight management computer-derived VNAV PTH mode had disengaged, which permitted the aircraft to descend below the calculated profile.

The company’s Required Navigation Performance approach procedure allowed the flight crew to set the approach minimum altitude in the auto-flight system prior to commencing the approach. This did not ensure the altitude alerting system reflected the assigned altitude limit of 7,000 ft and removed the defence of that alert when the flight crew did not identify the disengagement of the flight management computer-derived VNAV PTH mode. [Safety issue]

Following this occurrence ATSB report that:

Qantas changed their RNAV (RNP) approach procedures to only allow the altitude on the MCP to be changed from the current limiting altitude once the aircraft was within 2 NM (4 km) of commencing the approach.

The ATSB has highlighted these safety lessons:

Aerossurance is an Aberdeen based aviation consultancy.  For proven expertise on aviation safety, human factors operations and safety analysis matters, contact us at enquiries@aerossurance.com