Bombardier CL-604 Challenger D-AMSC dropped 9,000ft after a wake vortex encounter resulted in a temporary loss of control over the Indian Ocean.  This resulted in two serious injuries (head injuries and a fractured rib in one case and a fractured vertebra in the other) andone minor injury.  The airframe was overstressed and written off.

The business jet, operated by MHS Aviation of Munich, was in the Mumbai FIR en route from Malé, Maldive Islands to Al-Bateen, UAE with 9 people on board on 17 January 2017.  An Airbus A380, on an opposite course, passed over head 1,000ft higher, near the DONSA waypoint, around 500 nm from the nearest land.  Less than one minute later the business jet hit the airliner’s wake.

In their interim report the German accident investigation agency, the BFU, say the aircraft “shook briefly, then rolled heavily to the left and the autopilot disengaged”.  The BFU explain that:

At 0838:54 UTC the CL604, with engaged autopilot, began to slightly roll right. At the same time a counter-rotating aileron deflection was recorded and fluctuation of the vertical acceleration began. In the subsequent approximately 10 seconds the airplane had a right bank angle of 4° to 6°.

The PIC [subsequently commented that] since the sky had been blue and the ocean’s surface almost the same colour he had been able to recognise the aircraft’s flight attitude with the help of the clouds.

At 0839:04 UTC a lateral acceleration of 0.45 g to the right was recorded. The pitch angle changed from about 3° to about 1°, then within one second increased to 9° and decreased again in the following second to -20°. At the same time the FDR recorded a rudder deflection to the left reaching 11.2° after about two seconds whereas the bank angle changed from 42° right to 31° left.

At 0839:07 UTC …the autopilot disengaged, and a master warning, lasting seven seconds, was recorded.

Large control surface deflections and acceleration were recorded. The speed increased and at 0839:31 UTC reached approximately 330 KIAS [vs a Velocity Maximum Operating (VMO) between 26,570 ft and 30,990 ft of 318 KIAS].

At 0839:30 UTC the spoilers extended and 13 seconds later were retracted again. The N1 of the left engine had decreased to approximately 40% when the Interstage Turbine Temperature (ITT) began to increase and nine seconds later had reached 850°. The left engine was shut off.

[The] pilots had been able to recover the airplane at FL240 using control inputs on the aileron and later the rudder and slight elevator deflection.

At about 0856 UTC the Pilot in Command (PIC) informed the air traffic controller in Mumbai of the occurrence, declared emergency…. At about 0915 UTC the crew restarted the left engine. Subsequently the airplane climbed to FL250. At about 0956 UTC the autopilot was re-engaged.

The crew decided to fly to Muscat, Oman, landing at 1105 UTC.

The flight attendant, who suffered a minor injury, explained to the BFU that:

At the time of the accident she had been standing in the middle of the cabin preparing the service. Four of the six passengers had also not been seated. In her recollection the airplane had turned three times around its longitudinal axis, during which the occupants had been thrown against the ceiling and the seats. 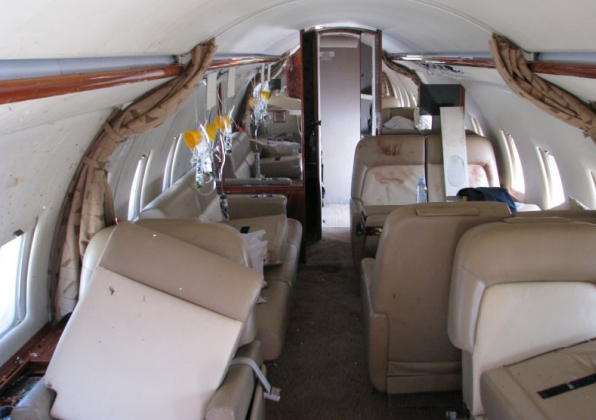 The BFU noted that:

The inside of the passenger cabin showed damages on the seats and the panelling, as well as traces of blood. The armrests of the four seats in the front, installed in club arrangement, were either deformed or had fractured.

A safety case and supporting documentation was published in 2006.

The tasks of the group were to:

A Strategic Lateral Offset Procedure (SLOP) is not available on the airway in use by the Challenger (L894).  An EASA Safety Information Bulletin on en route wake vortices is expected.

We will update this report as more information is published.

More on recovery from a Wake Vortex Encounter can be found on Skybrary.

UPDATE 22 June 2017: EASA has a Safety Information Bulletin (SIB) to remind pilots and air traffic controllers about the risks associated with wake turbulence encounters at high altitude and the applicable precautionary measures.

Bombardier declared the large cabin twinjet’s fuselage irrecoverable due to the G stress it faced…. Once released by investigators, the aircraft…was sold to FAI Germany for parts. FAI Germany operates six of these Challengers.

The business jet…was stripped of its wings and tail by the company’s FAI Technik subsidiary, and was then loaded on an Antonov 124 for the December 19 flight to…Nuremberg.