The UK Air Accidents Investigation Branch (AAIB) have recently issued a 15 page report on a accident involving Bombardier Global 6000 EC-LTF of TAG Aviation España during a night crosswind landing. During the landing at Prestwick Airport on 6 March 2014, the right wing touched the runway.  The aircraft landed without injury to anyone on-board. 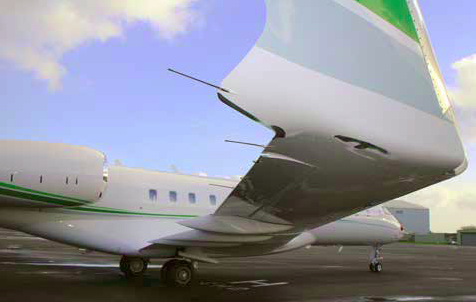 Prior to glideslope capture for Runway 12 at Prestwick the wind calculated by the onboard systems was 90º from the right at 35 kt.  When cleared to land, the aircraft was notified by ATC that the wind was from 190º at 12 kt, a crosswind component of approximately 11 kt. Passing 1,000 ft agl, the indicated crosswind had reduced to 25 kt and the pilots then had visual contact with the runway. The AAIB comment in the summary of their report:

The technique employed during the landing was different from that recommended in training material published by the manufacturer. Furthermore, the information in the training material about crosswind landings, and data on reduced wingtip clearance with increasing pitch attitude, had not been incorporated into the Airplane Flight Manual (AFM) or the Flight Crew Operating Manual (FCOM).

The pilot flying (PF) was looking through a Head-Up Display (HUD) and his view of the runway may have been impeded because the symbols on the HUD screen were set too bright.

On 17 April 2014 a similar event occurred to Global 6000 CS-GLB from another operator during a night crosswind landing at Luton Airport, resulting in left hand wing tip damage. That approach was made with a modest crosswind component from the right of about 9 kt and the aircraft was configured at flap 30 and flown at a target speed of VREF (112 kt).

The AAIB report that following these two accidents several actions were taken. In particular Bombardier amended the Global 6000 FCOM to include their recommended crosswind technique (the wings level crab technique, where the aircraft is pointed into the wind to control direction) aligning with the Global Express and Global 500o FCOMs that already contained that material.

In relation to the HUD, Bombardier’s senior engineering test pilot commented, according to AAIB, that:

…pilots who were new to HUDs must learn not to fixate on the screen but to “look through” it, otherwise their peripheral view of the outside world could be affected. He said that during this learning process, pilots must find the level of screen brightness with which they were most comfortable and it could take them a few landings to establish this. In his experience, new pilots initially tended to set the brightness level too high and this could cause the HUD symbology to become distracting. Consequently, during a landing with a significant crosswind, for example, a pilot who has set the brightness too high, may fixate on the screen and not discern all the relevant external cues. To reduce fixation on the screen, pilots should aim to use a HUD all the time when available.

EC-LTF was one of 30 aircraft monitored by the operator’s Flight Data Monitoring programme.  Downloads were nominally monthly and a base-specific report was produced that included an aggregate of the 20 most frequently triggered events for both the month and previous year, plus the 10 most frequently triggered events for each individual aircraft.  These were reviewed for trends.  The AAIB comment:

The operator’s FDM system incorporated three events that monitored for excessive bank angle between 50 ft agl and touchdown (the rollout was also monitored as part of the touchdown event logic). Following the accident the operator reviewed its monthly reports and FDM archive for the 12 months prior to the accident. Due to the relative number of bank angle events, they did not appear in the aggregated list of top 20 events.

However, on reviewing the top 10 list of events specific to EC‑LTF, the three bank angle events were noted to have been present during a number of reports. A retrospective review of the FDM records by the operator indicated that a precursor to several of the bank angle events was early alignment of the aircraft’s nose with the runway centreline during crosswind landings.

Among the operator’s fleet, EC-LTF was the only Bombardier manufactured Global 6000, although it operated 13 other similar variants from the Global Express family of aircraft. A review of these aircraft did not identify a similar trend of bank angle events or early de-crab manoeuvres.

Aerossurance has previously discussed the importance of monitoring for weak early warning signals.

Aerossurance has recently discussed another crosswind accident earlier in 2014, involving a Dash 8 in Greenland. In addition, more background can be found in this NLR report commissioned by EASA.

UPDATE 13 August 2020: The BFU report on a serious incident involving VistaJet Malta Bombardier BD-700-1A10 Global Express 9H-LXX at Hamburg on 22 June 2018.   During landing with a crosswind the left outer slat contacted the runway.

Aerossurance has extensive air safety, operations and accident analysis experience.  For aviation advice you can trust, contact us at: enquiries@aerossurance.com