Eye watering video has emerged of a mishap on the US aircraft carrier USS Dwight D. Eisenhower (CVN 69) in the Atlantic on 18 March 2016.  The 1½-inch-thick steel arrestor wire failed during the landing of a Northrop Grumman E-2C Hawkeye and during the go-around the E-2C drops out of sight below the deck edge before climbing away.  The investigation highlighted shortcomings in maintenance data.

Eight sailors on deck suffered a variety of injuries from the flailing cable, including a fractured skull, facial, ankle, wrist, pelvis and legs with one sailor receiving a possible traumatic brain injury.  A Northrop Grumman C-2A Greyhound and a Sikorsky MH-60S Seahawk helicopter parked on deck also received about $82,000 in damage. 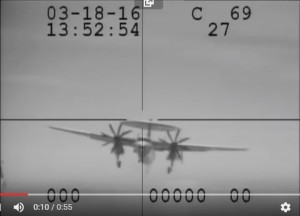 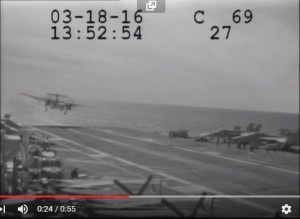 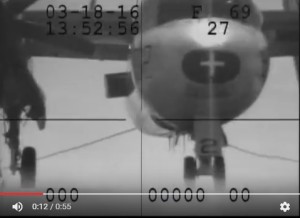 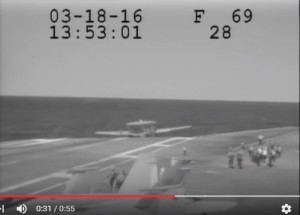 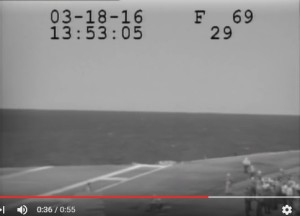 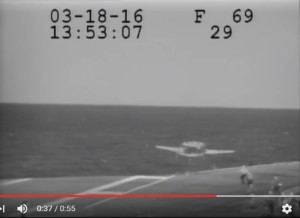 According to a US Navy investigation report obtained by The Virginian-Pilot through a Freedom of Information Act request:

… maintenance personnel missed at least one and possibly two “critical steps” while working on an engine that helps operate the carrier flight deck’s cables, which are called cross deck pendants, after a previous landing. As a result, the engine failed to slow the aircraft, instead causing the pendant to break “at or near” the Hawkeye’s tailhook. The report said that while there was a “lack of procedural compliance” while troubleshooting an error code from a previous arrested landing, “the sailors involved reasonably believed they had properly and conscientiously completed the complicated procedure.”

…were using an approved Navy procedure when they missed steps that led them to misprogram a valve that controls the gear engine’s pressure and energy absorption, according to the report. But that procedure lacked warnings, other notations and wasn’t “user friendly,” Navy investigators found. As a result, while those personnel failed to comply with a “technically correct written procedure,” the Navy found their error understandable because the procedure didn’t explain the basis for its steps, lacked supervisory controls and “failed to warn users of the critical nature” of the valve’s realignment. A command investigation into the incident included recommendations for the development of additional controls for troubleshooting the carrier’s aircraft recovery system as well as a review of the system’s procedures to add necessary warnings, cautions and quality assurance.

However, disappointingly, despite recognising the shortcomings in the maintenance data and that “the sailors involved reasonably believed they had properly and conscientiously completed the complicated procedure”:

…the role of many of our staff will change dramatically. The railway system of the future will require different skills from our workforce. There are likely to be fewer roles that require repetitive procedure following and more that require dynamic decision making, collaborating, working with data or providing a personalised service to customers. A seminal white paper on safety in air traffic control acknowledges the increasing difficulty of managing safety with rule compliance as the system complexity grows: ‘The consequences are that predictability is limited during both design and operation, and that it is impossible precisely to prescribe or even describe how work should be done.’ Since human performance cannot be completely prescribed, some degree of variability, flexibility or adaptivity is required for these future systems to work.

Blaming it on human error doesn’t help you learn, it doesn’t help you improve. You have to look deeper and ask: ‘what are the environmental or cultural issues that are driving these things?’ There is nearly always something obvious that can be done to improve safety.  One way to address issues in the lab is you don’t wait for things to go wrong in a major way: you look at the near-misses. You actively scan your work on a daily or weekly basis for things that didn’t turn out as expected. If you do that, you get a better understanding of how things can go wrong. Another approach is to ask people who are doing the work what is the most dangerous or difficult thing they do. Or what keeps them up at night. These are always good pointers to where, on a proactive basis, you should be addressing things that could go wrong.

Medication errors are too frequently assigned as blame towards a single person. By considering these errors as a system-level failure, healthcare providers can take significant steps towards improving patient safety. ‘Systems thinking’ is a way of better understanding complex workplace issues; exploring relationships between system elements to inform efforts to improve; and realising that ‘cause and effect’ are not necessarily closely related in space or time. This approach does not come naturally and is neither well-defined nor routinely practised…. When under stress, the human psyche often reduces complex reality to linear cause-and-effect chains. Harm and safety are the results of complex systems, not single acts.

UPDATE 11 August 2019: A US Navy sailor was crushed to death when an SH-60 helicopter external fuel tank was accidentally jettisoned during a turnaround. In another case, a sailor was knocked over by jet blast on the deck of aircraft carrier USS Carl Vinson and then run over by another aircraft. 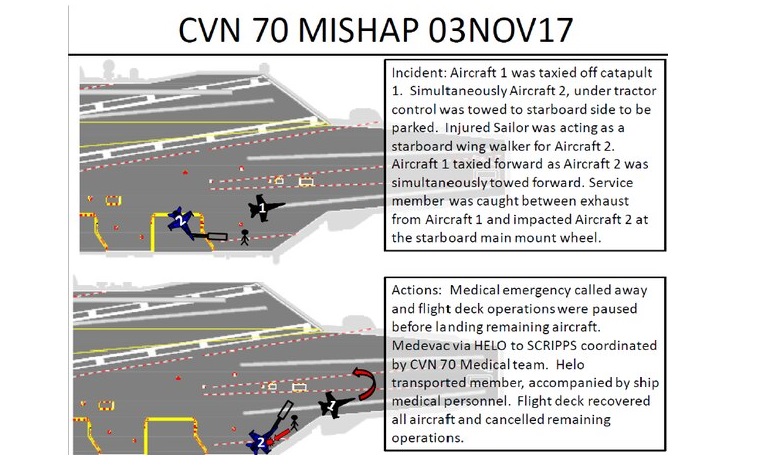