The French BEA-D (Le Bureau Enquêtes Accidents Défense – Air, UPDATE: renamed the BEA pour la sécurité de l’aéronautique d’État [BEA-É] in 2018 in recognition of its role in all state aircraft) issued a progress report in late 2017 into the loss of US registered SA227 AT Merlin IVC surveillance aircraft N577MX of Luxembourg based CAE Aviation operating from Malta for an unspecified agency of the French Government on 24 October 2016. 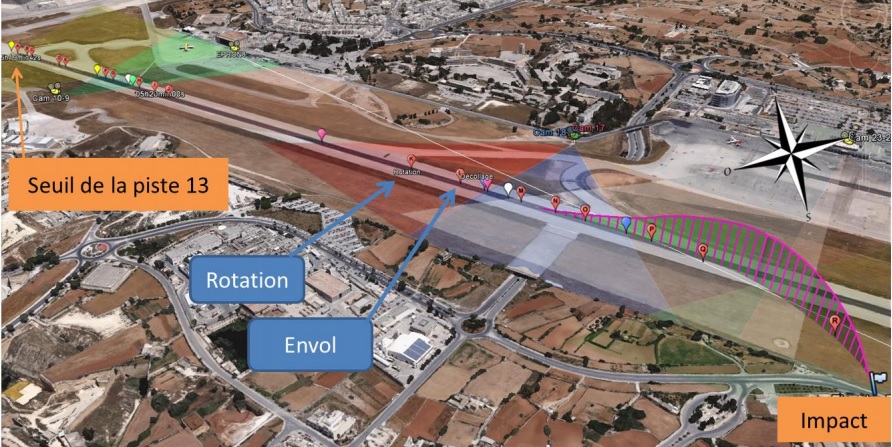 During the initial climb, 4 seconds after rotation, the aircraft pitched nose up, then rolled right around 150 degrees, reaching just over 260ft above ground level, before descending about 3 seconds later. 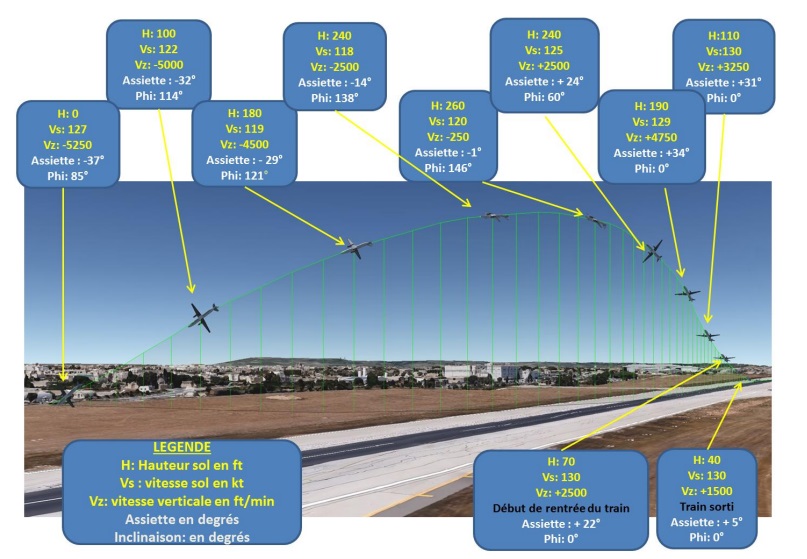 The aircraft rolled to the left prior to impact with the ground, 130 meters to the right of the take-off axis and approximately mid-runway. https://youtu.be/9OubF4h6ozw?t=38 The flight lasted about 10 seconds.  There was a post crash fire.  All 5 on board died. 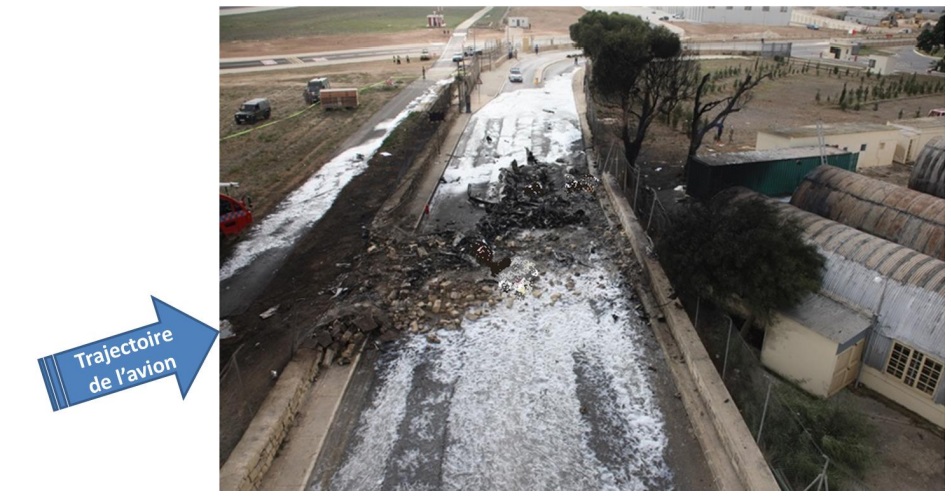 N577MX had been modified from March 2015 to March 2016 and was officially owned by a company registered in Missouri.  Different photographs in the BEAD-Report show an aircraft with a FLIR/EO sensor turret (though we believe this to be a US Air National Guard Bureau stock photo of a C-26) and another of N577MX two belly small radomes and a blade antenna.  In its modified state the aircraft had a total of 6 seats. 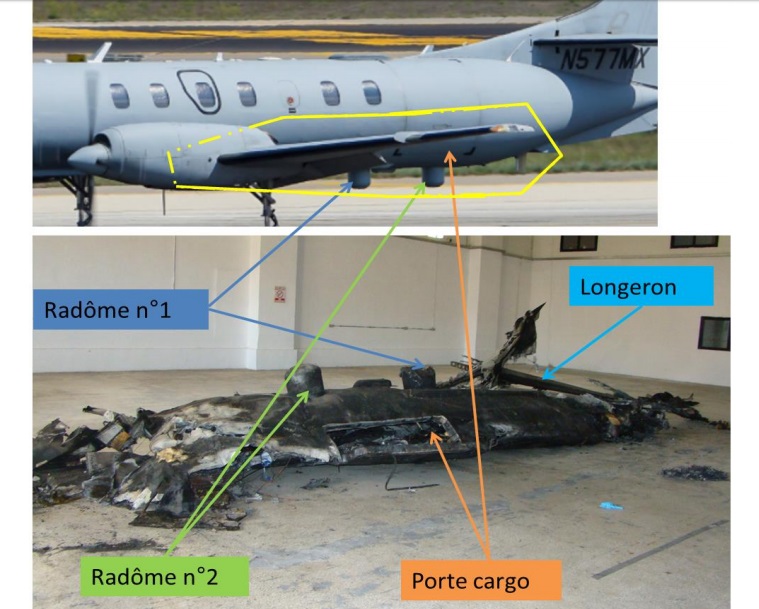 The aircraft was owned and operated by CAE Aviation, a company formed in 1971, who conduct aerial surveillance and airborne geophysics operations as well a providing aircraft for parachute training.  It is said to be unrelated to the Canadian company CAE but is an agent for Wescam.  CAE Aviation are said to also operate N919CK (registered to a trustee in Delaware) in Malta. The flight crew were employees of CAE Aviation.  The Commander was aged 30 and the Co-Pilot aged 70.  Both had FAA licences. The rear crew consisted of a Tactical Coordinator and two Systems Operators aged between 32 and 52.  The organisation that employed them is not revealed but press reports claim they worked for a French intelligence agency and the aircraft was conducting missions off the coast of Libya.

The aircraft was not fitted with a Flight Data Recorder. A acoustic spectral analysis of ground based video recordings shows that during the taxy out the rotational speeds of the two engines are identical.  In flight at least one of the two propellers was operating at at rated speed until impact.

The BEA-D eliminated the possibility that one of the flight crew seats may have come unlocked at rotation (and so resulted in an inadvertent nose up pitch input as it slid aft).  They do note that once the nose was 11 degrees above the horizon the ground ahead would not be visible. Turbulence from the preceding 757 or from buildings was rejected as a possible cause due to a 3 minutes separation and the low wind on the day respectively. No bird debris was found and no evidence of birds was seen in the surveillance videos or report by witnesses. The Warning and Caution panel had 7 indicators lit (shown in red or green below), 22 off (in black) and 11 that so far have not been determined (in white).  The one red light was for the SAS (stall avoidance system).  Investigation is ongoing in this area.

Glare from the sun is a possible factor that has yet to be ruled out, but the BEA-D comment that this on its own would not account for the flight.

The BEA-D say ongoing investigations include into the propulsion systems (engines and propellers), flight instruments and the flight controls. Documents onboard the aircraft were restored in Malta and are to be examined.  The modifications to the aircraft and its maintenance are being analysed. A flight test campaign in September 2017 on a similar aircraft is also being analysed. Enquiries in areas of organizational and human factors have began. So far the only recommendation is to have a contractual clause when chartering aircraft for the French Government that the BEA-D should be the accident investigation body .We will update this article when more findings are released.

BEA-É have issued their final report.  They have concluded that the accident began with “a technical malfunction during rotation or on lift-off, leading to a loss of control”. They explain that:

At Malta International Airport, the crew of a modified SA227 AT aircraft carried out a standard instrument departure at maximum takeoff weight.  On lift-off, the retraction of the landing gear was initiated, and the aircraft continued to increase its pitch attitude. When the pitch angle reached 34°, the aircraft entered a power-on stall and banked suddenly to the right until it was three-quarters inverted. The bank angle was reduced at the apogee of the flight path, and then the aircraft continued its flight nose down.  The aircraft hit the ground with a 38° nose-down attitude, a bank angle of approximately 70° to the right and a symmetrical installed power on the two engines. The aircraft, which was registered in the USA, notably had modified flight controls, and its maintenance was performed in conformity with the maintenance programme by a French company in accordance with an FAA “Repair Station” approval. The maintenance company did not have [despite requesting] the specific documentation for this modification, which is protected under ITAR.

The BEA-É also challenge whether the aircraft was eligible for a Normal Category CofA.

Causes of the Accident

Investigations show that a technical malfunction was the cause of the accident. This malfunction probably originated in the specific modifications of the aircraft and in the application of an inappropriate maintenance to these modifications.

The cable modification, to allow space for cut outs in the pressure hull are shown below (credit: BEA-É):

Given the condition of the wreckage and the absence of witness reports from the crew, only a flight data recorder could have enabled the BEA-É to confirm one of these hypotheses. However, in consideration of the factors detailed in the analysis, the hypothesis of damage to a component of the elevator control line remains the most plausible explanation.

Aerossurance has extensive air safety, operations, airworthiness, human factors, aviation regulation and safety analysis experience, including with many special mission aircraft.  For practical aviation advice you can trust, contact us at: enquiries@aerossurance.com