The Australian Transport Safety Bureau (ATSB) has published their investigation report on a case of hypoxia in an unpressurised twin turboprop survey aircraft:

On 1 August 2014, at about 0935 EST, a Reims Aviation F406 aircraft, registered VH-EYQ, departed Emerald, Queensland, on an aerial survey task with a pilot and navigator on board. The aircraft was fitted with an oxygen system to allow unpressurised operations above 10,000 ft. The pilot tested the oxygen system for normal operation prior to the flight.

During the climb, the pilot turned on the aircraft oxygen supply and connected and donned his oxygen mask. The pilot then monitored his blood oxygen saturation level on an oxygen pulse meter as the aircraft continued to climb, and monitored his flow of oxygen by reference to a flow indication in the supply tube. All appeared normal until about flight level 180, when the pilot noticed that his blood oxygen saturation level had fallen significantly.

The pilot attempted to increase the amount of oxygen he was receiving by making an adjustment to his oxygen system controller, but the accuracy with which he was controlling the aircraft deteriorated, and his speech became slurred. The navigator encouraged the pilot to maintain control and descend, and air traffic control prompted the pilot to ensure that he was receiving an adequate supply of oxygen.

Despite his apparently hypoxic condition, the pilot was ultimately able to identify that an oxygen supply system fitting had become disconnected. The fitting was located beneath the pilot’s armrest, and was the same fitting that the pilot had earlier connected during the climb (Figure 1). When he reconnected the fitting, he took a number of deep breaths and sensed almost immediate relief. 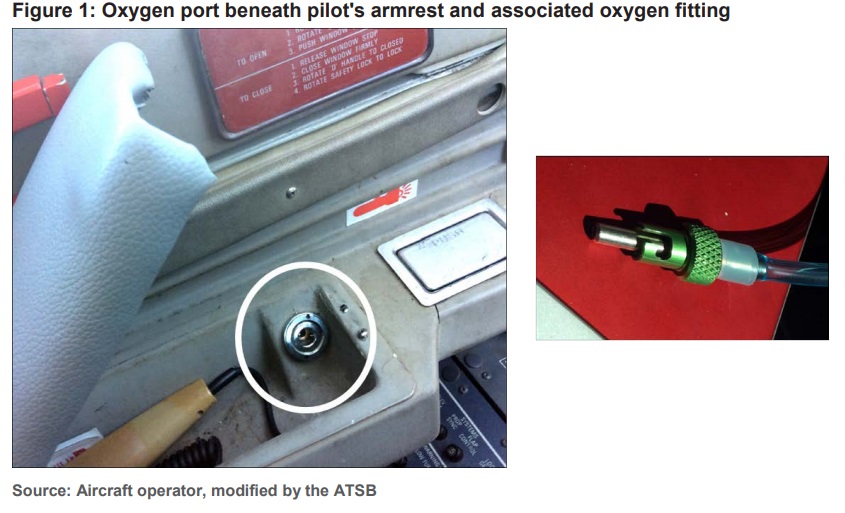 The crew returned to Emerald for an uneventful landing.  After landing, the pilot noted that his blood oxygen saturation level had increased back to a normal level (around 97%).

The entire flight lasted about 35 minutes. Available evidence suggests that the length of time from the first indication of a low blood oxygen saturation level to the point at which the pilot’s oxygen supply was re-established and a controlled descent commenced, was of the order of 10 minutes. During most of this time, the aircraft was probably manoeuvring between about FL 200 and FL 240. The maximum altitude reached was about FL 245.

The pilot commented favourably on the role played by ATC in the event, particularly the way in which ATC reacted to their concerns about the condition of the pilot with very deliberate recommendations and clearances. The pilot also commented that his hypoxia awareness training (mandated by the operator for unpressurised survey operations) helped the pilot appreciate the effects of hypoxia and his symptoms.

The investigation also found that the supply tube may not have been correctly routed through an armrest cut-out, and that movement of the armrest may have dislodged the improperly secured bayonet fitting. The operator’s report also found that the pilot’s oxygen controller was not visible to the pilot or navigator. As such, the crew were unable to see indications on the controller that could have alerted them to an oxygen supply problem.

As a result of this occurrence, the aircraft operator has taken steps in relation to pre-flight oxygen system checks, and crew cross-checks on the performance of each other’s oxygen system during flight above 10,000 ft.

This incident highlights the importance of careful attention to aircraft oxygen systems, particularly with respect to connecting and monitoring oxygen system performance. Pilots are reminded that hypoxia is an insidious condition and the time of useful consciousness is often very limited. A prompt and decisive response to the first indication of an oxygen supply problem is imperative.

For more on hypoxia see this excellent article Hypoxia: Its not about the breathing or Skybrary.

Aerossurance has recently had a particular interest in helicopter oxygen systems for high altitude operations in the Andes in Peru.

The investigation determined that, although a portable oxygen system was activated and available, the pilot was not continuously using oxygen while the aircraft was above 13 000 feet ASL, as required by regulation, and likely became hypoxic. 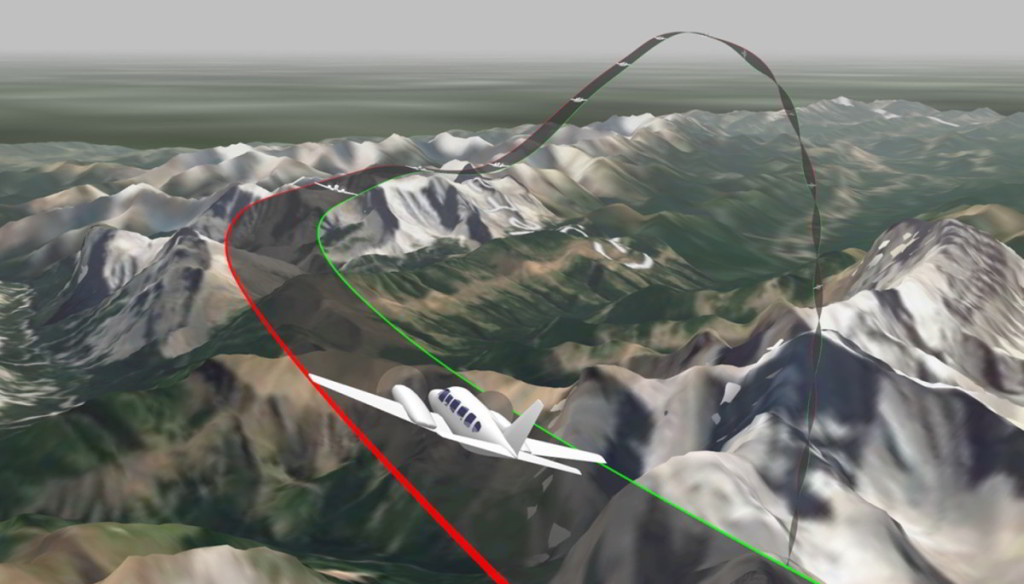 Final flight path of PA31 Survey Aircraft C-FNCI of Aeries Aviation leading up to the loss of control and spin entry based on Appareo Vision 1000 data (Credit: via TSB)

Although hypoxia can cause pronounced performance degradations, its onset can be slow and gradual, making it likely the pilot did not recognize the symptoms, and thus took no action to restore his supply of oxygen. The investigation also found that if flight crews do not undergo practical hypoxia training, there is a risk they will not recognize its onset when flying above 13 000 feet without continuous use of supplemental oxygen.

UPDATE 18 March 2020: The pilot of Cessna Grand Caravan 208B survey aircraft VH-FAY was almost certainly incapacitated, possibly from hypoxia, when his aircraft flew uncontrolled into the ocean off the east coast of Japan say ATSB.

The ATSB’s subsequent investigation found that while the aircraft was in the cruise on autopilot, the pilot almost certainly became incapacitated. Consequently, about 5 hours after the last position report, without pilot intervention to change fuel tanks, the aircraft’s engine stopped, likely due to fuel starvation. This resulted in the aircraft entering an uncontrolled descent into the ocean.

“Where an increased risk of hypoxia exists, good risk management practices should be used for flight planning. Because the effects of hypoxia can be insidious, training in recognition of early symptoms of hypoxia can increase the time available to react, descend and resolve any issues.”

A risk assessment had identified 32 hazards including hypoxia.  That was initially rated as ‘moderate’ and assessed as ‘unlikely to occur’.

However, many of the risk controls relied solely on the pilot’s experience and did not provide any detail on the steps the pilot had taken to manage those risks. The flight also took place outside of the company’s standard procedures and without the normal level of oversight from operations personnel, both of which could have provided an additional opportunity to identify and manage the hazards associated with the ferry flight.

The pilot did not have an in-line regulator for the flight. At altitudes above 17,000 ft, the aircraft’s system provided oxygen at 21.55 ± 2.5 PSI, which was higher than the Electronic Delivery System (EDS) inlet pressure range.

As a result of this accident, the aircraft operator amended its operation manual to include additional guidance for international ferry flights. It also created an oxygen-use guide and a specific risk assessment for positioning (ferry) flights.