A single seat Rolladen-Schneider LS 4-b glider, registration PH-974, was making a local flight from Larserveld on 23 April 2018.  According to the Dutch Safety Board (DSB) in their investigation report:

During the winch launch…the air brakes opened unexpectedly. The air brake control rod had slipped out of the locked position which was corrected by the pilot.

After approximately one hour in the air and flying through mild turbulence, the problem of unlocking air brakes and corrective actions by the pilot recurred several times.

At an altitude of approximately 1,100 metres the air brake control rod in the cockpit of the glider detached.

From that moment on the pilot had little to no control of the air brakes and he decided to return to the airfield. The pilot used his right hand to hold the remaining part of the control rod and used his left hand to steer the aircraft. The landing was without any further problems.

After the flight, it was found that the air brake control rod had become detached from the rest of the mechanism. 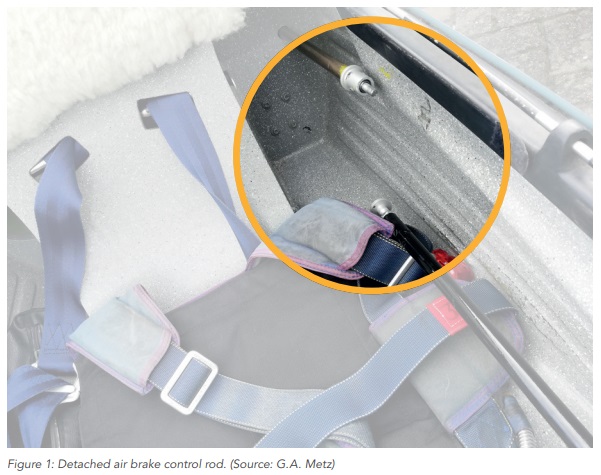 In 2017 several events had already taken place with this type of glider where a junction in the air brake control rod was about to fail.

The European Aviation Safety Agency (EASA) assessed the problems…as a safety risk and made the technical note mandatory by issuing Airworthiness Directive AD 2018-0032 with an effective date 1 March 2018.

This glider had been modified on 7 April 2018 to comply with that AD by a technician in the flying club’s workshop.  During their investigation the DSB…

…concluded that the wrong type of Loctite (243 [known as Blue Threadlocker, “a general purpose threadlocker of medium bond strength” instead of 638 [a “high strength retaining compound…for the bonding of cylindrical fitting parts”]) was used and the Loctite had expired 2 years ago.

Furthermore, the weld in the control rod was not removed by a 13.5 mm drill as required by the TN, but with another drill.

As a result the control rod was limited in its movement, which caused a bending moment on the air brake control rod junction. The weld also put pressure on the threading of the bolt in the swivel.

As there was insufficient thread locking on the bolt, combined with the repeated rotational movement of the airbrake handle (needed to operate the airbrakes) the pressure on the threading resulted in loosening of the bolt.

This resulted in a complete detachment of the swivel and so the air brakes could no longer be retracted fully.

In a useful proactive initiative, the DSB surveyed technicians who had performed this modification in the Netherlands:

The mechanics are of the opinion that in general the modification was not difficult to execute.

Some mechanics however found the modification instructions not clear and reported that they had requested the aircraft manufacturer for help. Technical support provided by the manufacturer was considered adequate.

For future modifications, KNVvL suggested the aircraft manufacturer provide a complete material listing…including not only the retrofit kit parts but also the required non-standard consumables and non-standard tools (such as the Loctite types and the 13.5 mm drill). Even better would be to include these items in the kit.