The presence of fire engines and the late lowering of the nose indicate that the failure of the nose gear to lock had already been detected. 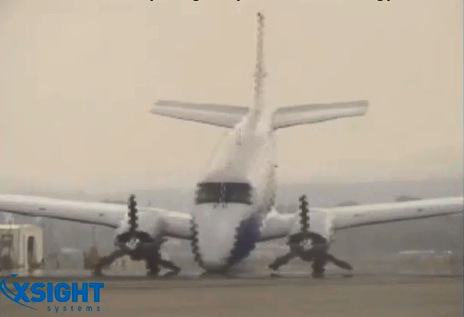 Everyone on board was able to evacuate the aircraft successfully. 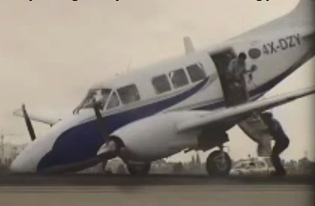 Xsight sold FODetect to the Israeli Airports Authority in 2011:

The FODetect®, a unique hybrid optical-radar sensing system, will be used to automatically detect FOD at Ben-Gurion International Airport (BGIA) in Tel Aviv, Israel. The selection of Xsight’s system places BGIA among the leading airports to adopt this automatic FOD detection technology.

The IAA’s selection of the FODetect® system for BGIA followed a rigorous two year evaluation process. The IAA determined that the Xsight FODetect® system is the best fit to the airport’s runway performance requirements. Furthermore, the IAA is confident that the FODetect® system will reduce the risk of FOD damage to aircrafts and thus increase flight safety for all passengers & cabin crew members alike.

The FODetect® system provides an effective FOD detection solution so that risky and costly damages incurred from FOD can, to a high degree of probability, be avoided. Continuous in-between-movement scanning of the airport runways by the FODetect® system allows for the immediate detection and removal of FOD from active runways. The FODetect® system utilizes unique hybrid high resolution optical-radar sensing technology to effectively detect the object, alert the operator and classify the FOD . Various FOD material types and sizes are reliably detected in most situations including in harsh weather and operating conditions.

Foreign object debris (FOD) at airports includes any object found in an inappropriate location that — as a result of being in that location — can damage equipment or injure airplane or airport personnel. The resulting damage is estimated to cost the aerospace industry $4 billion a year.

The most high profile runway FOD accident was the loss of an Air France Concorde in 2000, after a tyre disintegrated after contact with debris from a prior aircraft, resulting into significant damage to a fuel tank.

Variants of this system are also in use at  Paris Charles de Gaulle, Boston Logan International and Bangkok Suvarnabhumi International with Seattle-Tacoma to go live later this year.

In addition to scouring a runway approximately every 60 sec. for FOD (FODetect) compared to several times a day by ground crews, new applications include measuring snow depth, runway temperature and contamination (SnowWize), and detecting birds and remotely harassing out of the area with a blast from co-packaged speakers (BirdWize). Last but not least, there is ViewWize, an application that turns the system into a video monitoring asset for situations like the Queen Air prang.

UPDATE 8 February 2017: The US Air Force is evaluating technology developed by Israeli company Xsight Systems to rapidly detect damage to runways at air bases outside the USA.