When Screens Go Blank: NTSB on a 787 Display Loss After a Lightning Strike

On 10 October 2014, United Airlines (UA) Boeing 787-824 N26906 was struck by lightning during initial climb, a few minutes into a flight from London Heathrow (LHR) to Houston (IAH).  The US National Transportation Safety Board (NTSB) published their final report in April 2018.

The flight crew reported that the aircraft was flying through a “moderate non-CB (cumulonimbus) rain shower” with cloud tops of 10,000 feet mean sea level (msl) at the time of the lightning strike.

The Captain stated that:

The strike apparently occurred just above the Captain’s forward windshield frame. It was completely unexpected. There were no precursor indications (corona, daylight visible St Elmo’s, perceived static buildup, tingling, etc.), nor were there any notable after effects other than the failures. There were no other discharges visible as we approached the cloud, or after the event.

The strike was brilliant, but not blinding; consistent with the close proximity to our eyes. The audible “crack” was very loud, as would be expected by the location, and the Flight Attendants reported hearing a rumble travel through the fuselage back to the door three area immediately after the discharge. 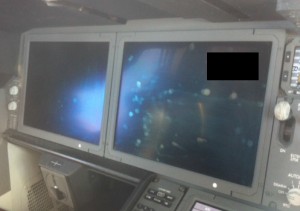 United Airlines B787-800 N26906: Captain’s side heads down display unit’s blanked during
the incident (Credit: UA Flight Crew via NTSB)

Based on crew reports and verified with images from the crew and the EAFR [enhanced airborne flight recorder], the flight crew lost the use of three of the five head down displays [HDDs] following a lightning strike. 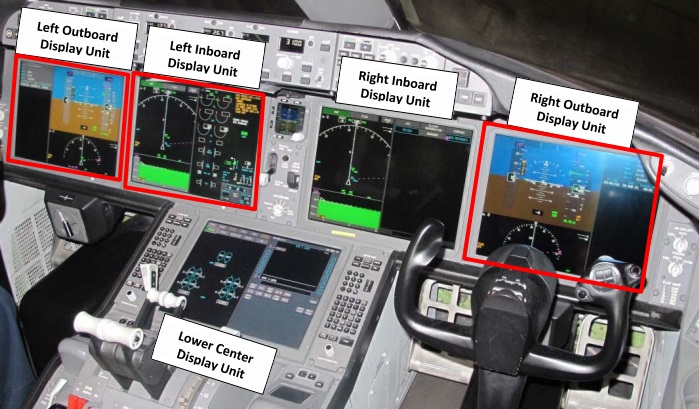 [Additionally] a status message related to a power distribution channel was displayed, and the captain’s forward windshield heat became inoperative. The standby instruments and the heads up displays (HUD) were unaffected by the event.

The crew followed published procedures, however the procedures did not contain a checklist related to a partial loss of displays. After the crew elected to follow the “Loss of All Displays Checklist”, none of the affected displays recovered to an operational state.

The crew made a safe landing back at LHR using the remaining two displays.

After landing, LHR maintenance performed a lightning inspection and found external nonstructural damage in five locations along the nose which was addressed in accordance with structural repair manual (SRM) allowable damage criteria. 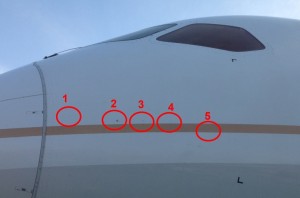 A power reset to the aircraft per maintenance manual procedures was accomplished, and the displays and other affected systems returned to normal function. 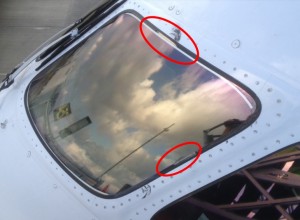 After a review by United maintenance personnel, the aircraft was approved for dispatch and continued the flight to IAH with no further faults noted. 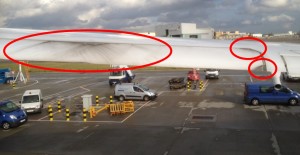 Using data gathers during post-incident near strike lightning and flat plate testing, Boeing Company conducted an analysis of the electrical fields present in the cockpit during a lightning event:

The analysis used three current waveforms (“A”, “D” and “H”), from ARP 5412 revision B, which are the same waveforms used during certification testing and analysis of flight deck equipment.

The B787-8 certification basis was the 14 Code of Federal Regulations (CFR) Part 25 Airworthiness Standards, through Amendment 25-119 and amendments 25-120, 25-124, 25-125 and 25-128 with some exceptions and Special Conditions (SC) as noted in the 787-8 Type Certificate Data Sheet (TCDS).  The key requirement regarding lightning was 25.1316 at Amendment 25-80 (issued 20 April 1994).  At the time of the 787 programme, FAA Advisory Circular (AC) AC 20-136A Protection of Aircraft Electrical/Electronic Systems Against the Indirect Effects of Lightning outlined one means of compliance, but not the only means, to show compliance.  The NTSB note that:

The current industry standard for lightning tests do not include test conditions simulating a rapid transient radiated electric field.

The NTSB also explain that:

IWWF is a CFRP fabric into which thin bronze wires are woven near the surface of the CFRP.

The IWWF is incorporated into the fuselage skins for lightning direct effects and will not greatly affect the conductive properties of the CFRP important to lightning indirect effects.

Since the structure is primarily CFRP, the Boeing 787-8 also utilizes a current return network (CRN). The CRN was incorporated into the wings, empennage and fuselage sections to carry lightning and airplane-generated currents. With respect to lightning indirect effects, the CRN serves to minimize lightning-field coupled voltages to wiring routed in close proximity to the CRN elements.

A shutdown of the displays due to the inability to operate through a rapid transient radiated electric field brought on by a near field lightning strike.

Contributing to the loss of displays for the remainder of the flight was the lack of guidance to the crew to perform a controlled power reset to the display.

After the event, the aircraft manufacturer notified the fleet operators of the event and subsequent loss of displays. The manufacturer has implemented a software change to the 787-10 aircraft, which will start with the first production aircraft’s entry into service (estimated 2018). The software change will automatically reset a display unit if the unit blanks due to certain internal fault conditions.

For current and retrofit 787-8 and 787-9 models, the manufacturer has evaluated an equivalent software change, based on the 787-10, and the expected implementation for the changes is in 2019.