The ditching of Icelandic Coast Guard Aérospatiale SA365N Dauphin TF-SIF in the Atlantic off Reykjavik on 16 July 2007 highlights the importance of avoiding protuberances that can puncture emergency flotation systems, careful configuration management and establishing emergency drills. The Icelandic Transportation Safety Board (ITSB), the RNF, issued their report in December 2010.

The aircraft was on a winch training mission to hoist people from the Slysavarnarfélagið Landsbjörg (ICE-SAR) 16m Arun Class lifeboat BS Einar Sigurjónsson, a life raft and from the water at a training area about 8 minutes from their base at Reykjavik’s domestic airport.

The RNF say that:

According to the commander’s statement, all parameters were normal and the torque was approximately 85%. The commander announced to the crew that the aircraft was in Class 3 performance and the aircraft would be ditched in case of an engine or tail rotor failure.

The aircraft was operating in a light wind (10 knots) and at ISA-1 (14°C).  Being Performance Class 3 (PC3) highlights the risk of conducting live winching on an aircraft with limited One Engine Inoperative (OEI) performance.

While in the hover at 45 feet, the crew commenced an operation to winch a rescue litter down to the lifeboat.

About 3 seconds after the line was free from the litter the low Nr [main rotor speed] horn started to sound… [and]…the crew noticed a power loss followed by a reduction of Nr. The PF [Pilot Flying] directed the aircraft away from the ship and scanned the caution warning panel for warning lights but saw none lit. The PNF [Pilot Not Flying] looked at the Nr indicator and determined it to show Nr between 300 and 330 (Normal Nr is 355) rpm and the aircraft was losing altitude.

…the crew retarded the fuel flow control lever (FFCL) in order to shut off the engines. The pilot reported that when shutting off the right hand engine the engine seemed to be already on low rotation speed. The crew then stopped the main rotor by applying the rotor brake and then cut the hoist wire. After a short briefing the crew shut the battery off as well as the gyros.  The crew then evacuated the aircraft through the right hand sliding door and swam to a boat from BS Einar Sigurjónsson. The RNF note the evacuation was a surprisingly unhurried 4 minutes after ditching.  The floats had inflated correctly however the crew noticed when they evacuated that that the front floats were rubbing against the pitot tubes and shortly after the forward chamber of the right hand front float deflated. The helicopter was fitted with a Cockpit Voice Recorder (CVR), though not a Flight Data Recorder (FDR).  Acoustic analysis of he CVR showed that one engine speed had started to fluctuate approximately 45 seconds before the ditching. The Nr drooped as shown below: The RNF believe the engine power loss was due to salt and grease in P2 chamber of the number 2 Turbomeca Arriel 1C engine Fuel Control Unit. Scratches on the Left Hand Front Float from the Pitot Tube (Credit: via RNF)

A tear was found on the right hand front float in the equivalent location. Normally the SA365N pitot tubes are below the nose (position B) and to the side (position A) for specific mission equipment fits.

TF-SIF was delivered with the pitot tubes in position A.  The right pitot tube replaced in 2004 due to a crack. The replacement had a metal drain valve to the rear that eventually ruptured the float.  In 1992 the aircraft manufacturer had changed the design of the pitot tube for use in position A to prevent such interference:

The RNF explain that the aircraft had been certified for Sea State 4 (as we discussed in an earlier article):

According to the aircraft manufacturer the floating capability of the aircraft was tested with all doors jettisoned and one compartment deflated.

…the combined effects of the doors not being jettisoned, the moment/weight of the winch (lateral imbalance) as well as the right front compartment being deflated to be the reason for the aircraft capsizing.

The RNL note that surprisingly:

The operator did not have a checklist within the QRH for ditching or Emergency Evacuation – Sea. The operator did however have this for its other type of aircraft, AS332L1 (Super Puma), which the crew was familiar with.

The RNF recommended that the operator fit FDRs to their aircraft and produce Emergency Evacuation – Sea procedures for all their aircraft. 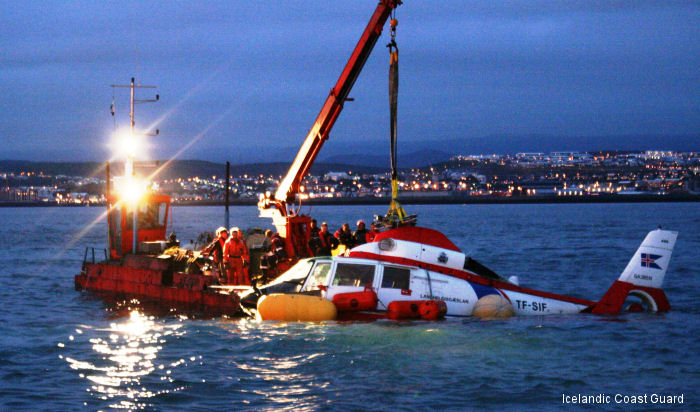 Since entering service in 1985 TF-SIF had rescued c250 people, while flying over 7000 hours.  It is now on display at a local aviation museum. UPDATE 25 June 2017: During an air ambulance positioning flight in Iceland an Impromptu Flypast Leads to Disaster.