After a major accident, as well as the emergency response to deal with the immediate casualties (a subject Aerossurance examined in May 2014), there is usually a need to deal with the resulting crisis.  This is typically either a crisis of confidence in, or an adverse affect on, the organisation or organisations involved.

Dr Ian Mitroff, Professor Emeritus at the USC Marshall School of Business at the University of Southern California, has identified 16 patterns that are common in crises.  A poor performance or response in relation to any of these elements can deepen the crisis.

At the beginning of a crisis there is often a lot of uncertainty both on what has happened and what needs to be done.  This is frequently evident after air accidents and similar events where evidence is either unavailable, quarantined or in the hands of accident investigators.  Poor organisations hide from public view at this stage, awaiting clarity and certainty but actually creating a vacuum that is filled by the speculation of others.  A recent poor example was the loss of MH370 which was widely regarded as a classic of poor response (PR week and MediaFirst). It contrast after the recent loss of the Virgin Galactic SpaceShipTwo, Sir Richard Branson was on site, engaging publically the next day and setting a dignified and concerned tone.  His performance after the 2007 Greyrigg train derailment (an accident that was caused by rail deficiencies not by his companies train) is often regarded as a classic.

Branson cut short a holiday to attend the site in Cumbria immediately and makes clear that Virgin care about ‘people’ and ‘safety’ above ‘profit’. He was able to show human empathy and avoided getting into a ‘blame game’ (see below). Notice his control during the interview.

Another example held up as an impressive handling of a crisis was British Midland’s Sir Michael Bishop after the 1989 Kegworth accident.  MediaFirst have published an insightful analysis of his actions here.  It is noticeable that Bishop was on duty for the night of the 1967 Stockport Argonaut disaster, an accident that had a major influence on airliner survivability and on the exchange of safety data, and his experiences influenced his widely praised actions after Kegworth.

The footage of flames, smokes, wreckage or victims is repeatedly used by the media.  Images of the disintegration of Space Shuttles Challenger and Columbia ironically represented those disasters as did the wreckage of MV Herald of Free Enterprise. In the later case, within 8 months of the 1987 accident, the operator Townsend Thoersen, whose origins went back to 1929, was rebranded by recent new owners P&O and her sister ships renamed.

However, if an organisation issues images, they should be aware that they will be critically viewed, as this image below, purporting to show the scale of an emergency response was examined: 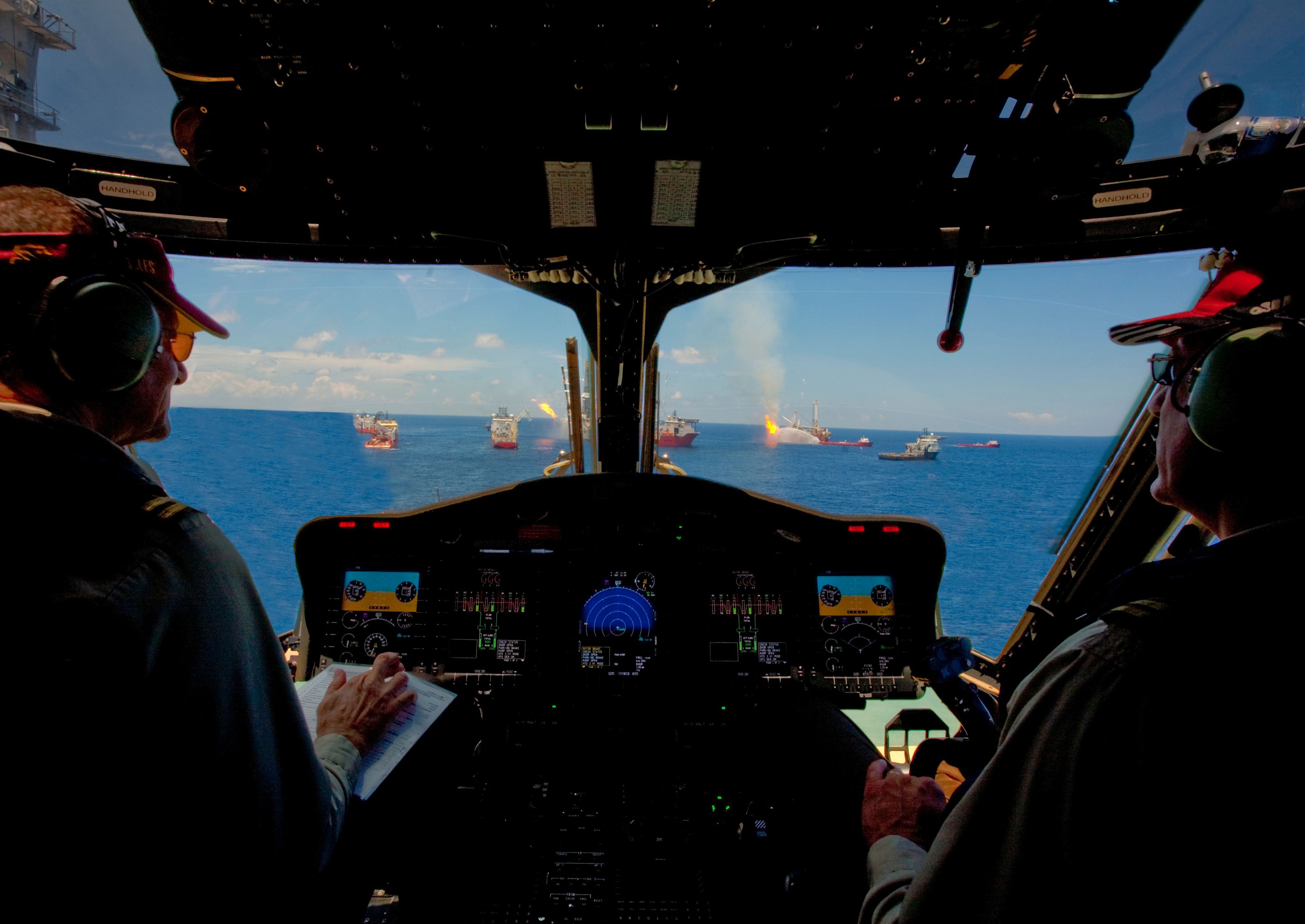 What errors can you spot? Click for more details!

3) Objectivity is a Turnoff

While it is logical to use data to refute speculation and to put a crisis in context, often when organisations attempt to counter speculation they are seen as uncaring or overly calculating when they use statistics (such as 5 year rolling accident rates  – no matter how good).  This is particularly when contrasted with highly personal accounts of tragedy.

4) The Court of Public Opinion

Mitroff suggests that whereas in court you are innocent until proven guilty, in the media the reverse is the case.  Plus the ‘witnesses’ are more varied and often self selecting.   Sir Richard Branson commented to the BBC: “When you have any incidents you get a lot of self-proclaimed experts coming out, a lot of whom know nothing about what they talk about”.  Professor Graham Braithwaite of Cranfield University recently commented that:

The selection of some of these so-called experts can seem bewildering… especially when ‘veteran’ is used to describe someone who is ‘old’ and ‘qualified’ can simply mean ‘attended a course’.

Even when positive statements are given coverage, they are often followed by new ‘revelations’.  Some may be a details of a prior event that hadn’t warranted coverage before or adverse prior comment that is seized upon.  An example after the Virgin Galactic SpaceShipTwo accident was a presentation given by a former test pilot now working for a competitor, that suddenly received publicity.

When the media do use data, they can often present it in visual and accessible ways, more readily interpreted by the general public.  Increasingly data can be rapidly collated from on-line sources and used to compare and contrast different organisations and products.  Sometime this data is not compatible of misrepresented but to an n0n-expert can be convincing.  Aerossurance recently discussed a USA Today series ‘Unfit for Flight?’.

Mitroff uses the case of the fatal ValuJet accident in 1996 to show how, for example, the performance of the regulator then draw attention.  Aerossurance has recently covered a similar case with the US National Highway Traffic Safety Administration (NHTSA).

In some cases criminal law is rapidly applied, hampering investigations and resulting in an adversarial situation that buries lessons.  In other cases politicians demand tougher laws to stop a repeat, further giving the impression an organisation is guilty (albeit of an unwritten law) or hold hearings prior to any legal action.  A classic example of the latter was the painful congressional grilling of BP’s Tony Hayward after the Macondo / Deepwater Horizon disaster.

Using aviation examples, every delay, return to base, or diversion becomes a drama used to reinforce the perception of an organisation in trouble.

Where more than one organisation is involved, its possible to have more negative publicity generated by one party trying to pass the blame to another (e.g. Firestone and Ford or BP and Transocean) or to an individual (e.g. Costa Concordia or in a Spanish rail disaster).

With the benefit of hindsight, data is re-analysed to suggest that warning signs previously existed and where ignored or misunderstood.  Aerossurance discussed such a case with GM recently.

Lessons from previous incidents are highlighted suggesting that these lessons were ignored in the most recent accident as for example with the S-92 main gear box (discussed previously by Aerossurance).

Stakeholders distance themselves from the organisation who had the accident (for example a potential new customer cancels their contract despite extensive prior due diligence).

14) Being Forced to Hire Independent Investigators

Mitroff comments that organisations “are well advised to hire an independent investigator” (as occurred at GM) and that if they don’t they are forced to after.  In aviation, while  we have the benefit of independent government investigators who are charged with finding means to prevent future accidents.  However, in the most public of cases it is still worth ensuring any internally commissioned reports are demonstrably independent as they are likely to be subject to public examination later, with accusations (even unfounded) of internal bias.

15) Doing the Right Thing Too Late

Eventually, organisations tend to do things that they could and often should have done early in a crisis, sometimes turning what would have been a sign of a proactive response if done earlier into one that at best attracts scorn and at worst looks like an admission of guilt.

UPDATE 21 July 2015: The BBC published an article that discusses the value of saying sorry and come cases were that took some time.

It is never too early to start to prepare for crises.  Reuters has published a useful critique of BP’s performance the Macondo / Deepwater Horizon accident.  We highly recommend the author, Tom Bergin’s book Spills and Spin, reviewed by the FT here.

See also: How to Lead During a Crisis: Lessons From the Rescue of the Chilean Miners

UPDATE 17 November 2014: The next article is Crises – 10 Lessons on Early Warning

UPDATE 15 April 2015: This press article on politicians responses to an oil spill near Vancouver illustrates some of the PR dynamics that can occur exceptionally early in a crisis in the Twitter age.

UPDATE 21 May 2020: Covid-19: did the UK government prepare for the wrong kind of pandemic?

A review of official documents and interviews with politicians, national security advisers and experts in risk management suggests… that ministers stuck closely to the recommendations of a well-honed plan for a different disease: the flu.