At 19:52 on Sunday 8 January 1989 British Midland Boeing 737-4Y0 G-OBME took off from London Heathrow for Belfast. Thirty three minutes later 47 people on board would be dead in a crash near the Leicestershire village of Kegworth. 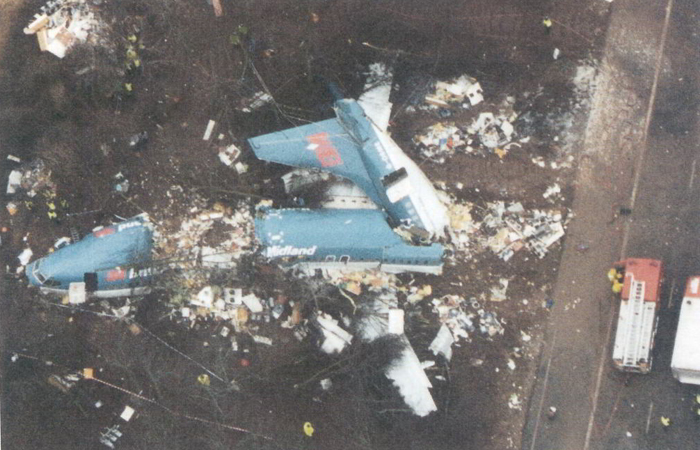 Just 13 minutes after take off, while climbing through 28,300 ft, the outer panel of one of the No. 1 (i.e left hand) engine fan blades detached, causing compressor stalls, airframe vibration and a smell of fire in the cockpit.  The AAIB determined that the fan blade failure was due to high-cycle fatigue due to fan flutter. 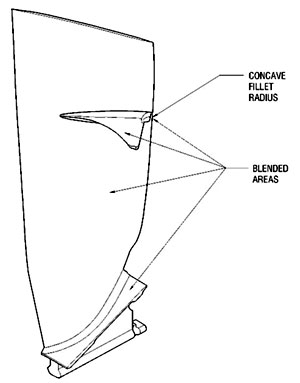 Testing revealed that in order for this mode to occur, the engine needed to be at a full-power setting, in a high angle of attack attitude, and above an altitude of 27,000 feet.

About eight seconds after the fan blade failure, the Captain took control of the aircraft and disengaged the autopilot. He looked at the engine displays but did not gain a clear indication of the source of the problem. He relied on his knowledge of the aircraft air conditioning system and the First Officer’s assessment of the Engine Instrument System (EIS) when diagnosing the problem.  The Captain thought the smoke and fumes were coming forward from the cabin to the flight deck and was assuming most of the air in the cabin was supplied by the No. 2 (i.e. right hand) engine.   This logic would have been reasonable for other aircraft he had flown but for the B737-400 a portion of conditioned air for the cabin came from the No. 1 engine. Furthermore, on both the B737-300 and -400 air from the No. 1 engine is feed directly to the flight deck too.

The Captain said, “Okay, throttle it back” about 19 seconds after the failure, referring to the No. 2 engine which the Co Pilot had stated was showing the higher vibration indications.

At 43 seconds after the fan blade failure, the Captain ordered the First Officer to, “Shut it down,” without specifically identifying which engine. This was initially delayed because they noticed the undamaged No. 2 engine was not displaying signs of failure.  They tried several times to complete the Engine Failure and Shutdown Checklist but some attempts were interrupted by communications with ATC and with the airlines ops staff.

Two minutes and 7 seconds after the failure, the No. 2 engine was finally shut down and the auxiliary power unit (APU) was started. The smoke in the cockpit cleared.  The No. 1 engine Exhaust Gas Temperature (EGT) began to reduce.  The No. 1 engine rotor speeds and fuel flow also stabilised.  These all reinforced the belief they had correctly shut down the failed engine.

When British Midland had taken delivery of their first EIS equipped B737 an EIS-equipped training simulator was not available.  The display consists of primary engine instruments to the left and secondary instruments (such as vibration) to the right. 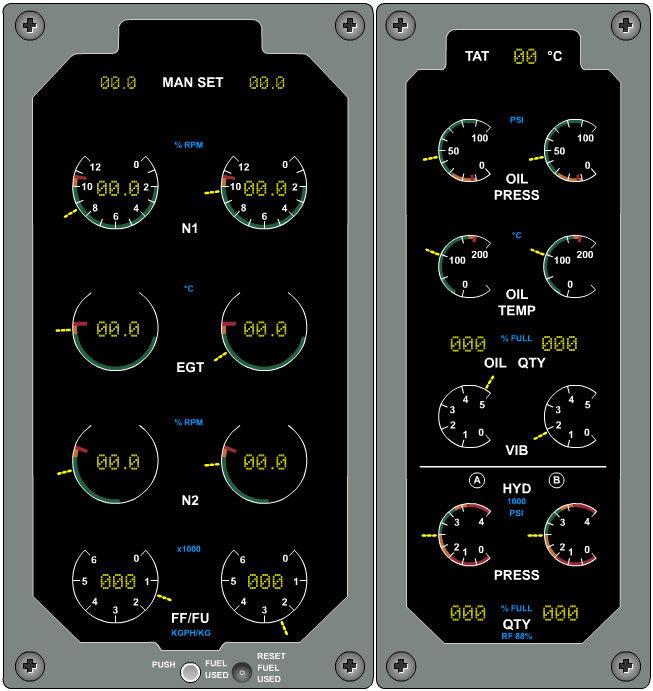 B737-400 Engine Instrument System (EIS) Primary Instruments to the Left – Secondary to the Right (Credit: FAA)

In their accident investigation report the UK Air Accident Investigation Branch (AAIB) say that the failure indications encountered were “outside the [crew’s] training and experience” and:

They reacted to the initial engine problem prematurely and in a way that was contrary to their training.

They did not assimilate the indications on the engine instrument display before they throttled back the No. 2 engine.

As the No 2 engine was throttled back, the noise and shuddering associated with the surging of the No 1 engine ceased, persuading them that they had correctly identified the defective engine.

They were not informed of the flames which had emanated from the No.1 engine and which had been observed by many on board, including 3 cabin attendants in the aft cabin.

Although written in his report on the 1988 Clapham rail disaster, Anthony Hidden QC’s wise words are also highly relevant here:

The crew had by this point decided to divert to East Midlands. 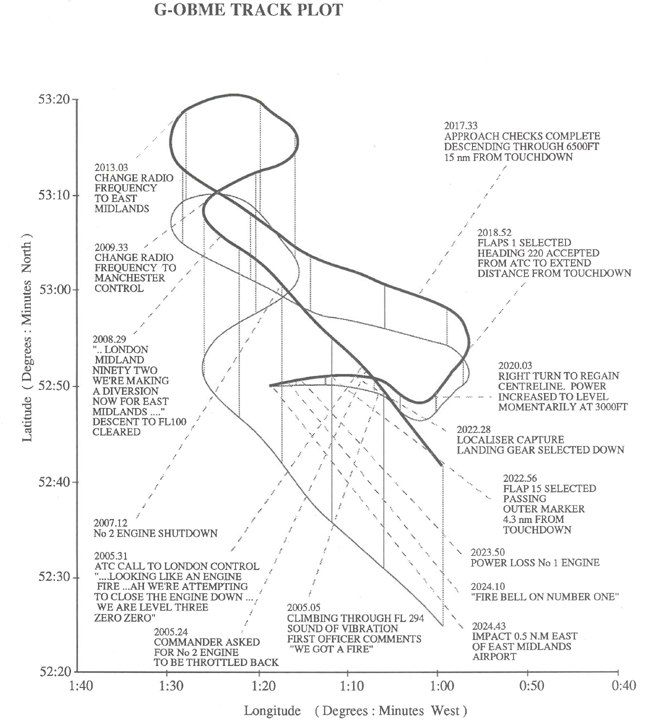 The flight was cleared for a approach to runway 27.  Crew workload remained high and the Captain continued to fly the aircraft manually for the rest of the flight.  Seven minutes and 23 seconds after the failure, the Captain attempted to review the situation, asking “what indications did we actually get, just rapid vibrations in the airplane, smoke…”.  In the face of more interruptions this was paused and not re-continued. 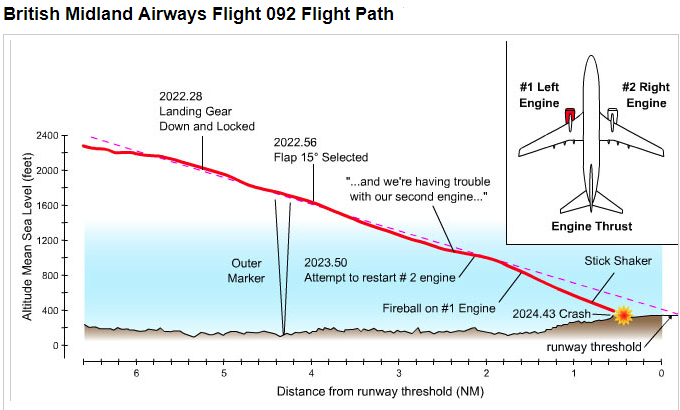 At 900 feet, 2.4 nm and 150 knots No. 1 engine power suddenly decreased and a fire warning activated. Attempts to restart the right engine were unsuccessful as the aircraft was now at the low speed boundary of the starter assist in-flight restart envelope.  The ground proximity warning system (GPWS) sounded, followed by a stall warning.

The aircraft struck trees to the east of the M1 motorway, which runs perpendicular to runway 27.  The aircraft crashed on the western embankment of the M1, coming to rest in three pieces, 900 m from the runway threshold.  The AAIB comment:

The first impact was at an airspeed of 113 knots CAS, with a rate of descent of between 8.5 feet/sec and 16 feet/sec. The pitch attitude was 13° nose up.  The second and major impact occurred at a speed of between 80 and 100 knots, at an angle of approximately 16° below the horizontal and with the aircraft at a pitch attitude of between 9° and 14° nose down. The associated peak deceleration was of the order of 22 to 28g, predominantly longitudinal.  The decelerations generated in the second impact were greater than those specified in the Airworthiness Requirements to which the airframe and furnishings were designed and certificated. They were, however, within the physiological tolerance of a typical passenger.  In the second impact, the forward fuselage separated from the overwing section of fuselage and the tail section buckled over, and to the right of, that section of fuselage just aft of the wing.

There were a total of 47 fatalities, 74 serious injures and the other 5 persons on board escaping with just minor injuries.  No one travelling on the busy M1 was harmed in the impact. 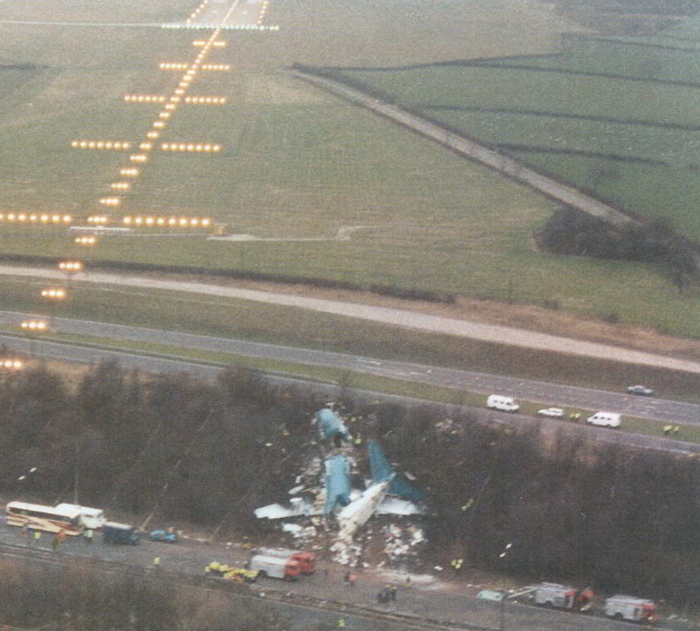 The incidence of passenger fatality was highest where the floor had collapsed in the forward section of the passenger cabin and in the area just aft of the wing. 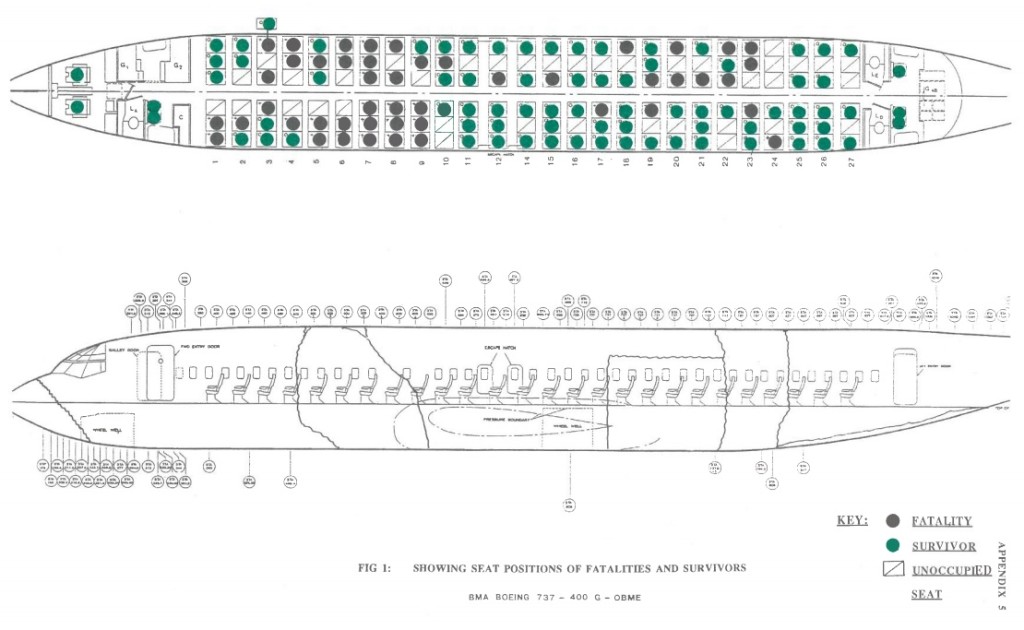 The cabin floor and the passenger seating remained almost entirely intact within the overwing and tail sections.

There was a comprehensive examination of passenger injuries (BBC video) and resulted in changes to the recommended brace position.

Regulations had been introduced requiring aircraft seats be able to withstand -16g accelerations only after British Midland had taken delivery of these aircraft.  However, G-OBME was actually fitted with 16g seats that performed better than older 9g seats would have, even though the impact exceeded their design requirements. 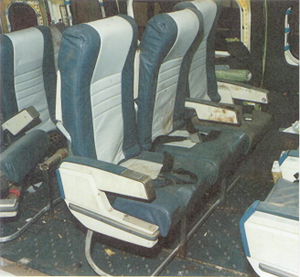 Principally, that high speed in communications is essential; that taking responsibility, showing concern and demonstrating action make you a more sympathetic figure in the public eye; and that establishing yourself as the prime source of information gives you control over how the story’s reported.

It is noticeable that Bishop was on duty for the night of the 1967 Stockport Argonaut disaster, an accident that also had a major influence on airliner survivability, and too on the exchange of safety data, and his experiences influenced his widely praised actions after Kegworth.

On the eve of the 30th anniversary Leicestershire Police officers involved in the Kegworth disaster recalled the emergency response, including the revelation that a minibus of SAS troopers stopped on the M1 to aid the rescue.

UPDATE 8 January 2019: Kegworth disaster 30 years on: How stewardess Anne survived the crash on only her third working trip

The Leicestershire village’s parish council will host a memorial service at St Andrew’s Church at 11am.  Survivors and victims’ families will lay wreaths at the crash memorial in Kegworth Cemetery.

UPDATE 21 January 2021: The USAF release an AIB report on a fatal E-11A (Bombardier Global Express) accident in Afghanistan after a Fan Blade Off event when a rapid diagnosis resulted in the serviceable engine being shut down.