On 8 January 2016 Canadair CRJ-200 (CL-600-2B19) cargo aircraft SE-DUX of West Air Sweden was destroyed when it impacted remote terrain in Northern Sweden following a Loss of Control – Inflight (LOC-I). Both pilots were killed. The aircraft had departed Oslo-Gardermoen Airport, Norway 70 minutes earlier for Tromsø, Norway on a night mail and parcel service.

The Swedish Accident Investigation Board (the Statens Haverikommission [SHK]) has recently published its accident report into an accident that is reminiscent of the LOC-I suffered by Airbus A330 F-GZCP operating flight AF447 in 2009. 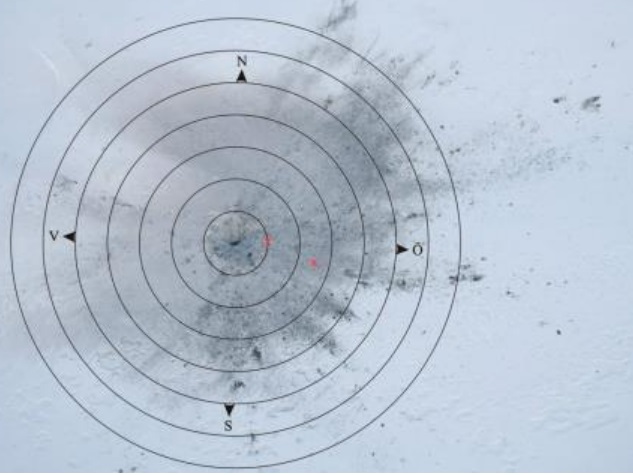 The flight was uneventful until the start of the event, which occurred during the approach briefing in level flight at FL 330. The event started at 00:19:20 hrs during darkness without moonlight, clouds or turbulence.

The lack of external visual references meant that the pilots were totally dependent on their instruments which, inter alia consisted of three independent attitude indicators.

According to recorded data and simulations a very fast increase in pitch was displayed on the left attitude indicator. The pilot in command, who was the pilot flying and seated in the left seat exclaimed a strong expression.

The displayed pitch change meant that the pilot in command was subjected to a surprise effect and a degradation of spatial orientation.

The autopilot was, most probably, disconnected automatically, a “cavalry charge” aural warning and a single chime was heard, the latter most likely as a result of miscompare between the left and right pilots’ [primary] flying displays (PFD).

Both elevators moved towards nose down and nose down stabilizer trim was gradually activated from the left control wheel trim switch. The aeroplane started to descend, the angle of attack and G-loads became negative. Both pilots exclaimed strong expressions and the co-pilot said “come up”.

About 13 seconds after the start of the event the crew were presented with two contradictory attitude indicators with red chevrons pointing in opposite directions. At the same time none of the instruments displayed any comparator caution due to the PFDs declutter function in unusual attitude.

Bank angle warnings were heard and the maximum operating speed and Mach number were exceeded 17 seconds after the start of the event, which activated the overspeed warning. 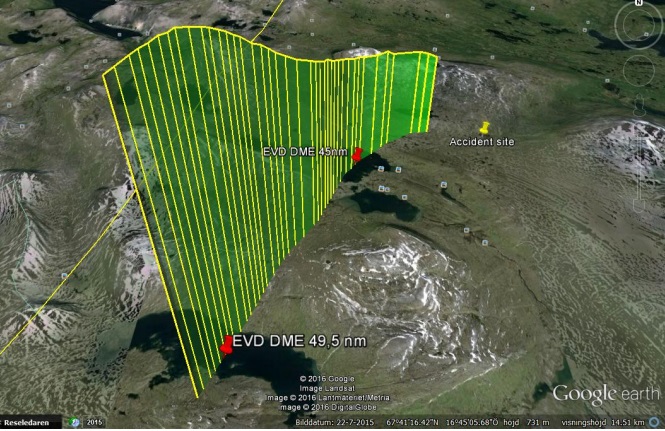 The speed continued to increase, a distress call was transmitted and acknowledged by the air traffic control and the engine thrust was reduced to flight idle.

The crew was active during the entire event. The dialogue between the pilots consisted mainly of different perceptions regarding turn directions. They also expressed the need to climb. At this stage, the pilots were probably subjected to spatial disorientation. The aircraft collided with the ground one minute and twenty seconds after the initial height loss.

The accident site and the wreckage did not show any evidence of an inflight break-up.  Debris was found up to a distance of about 150 meters from the crater. Most parts were found in the crater and to the northeast of it. 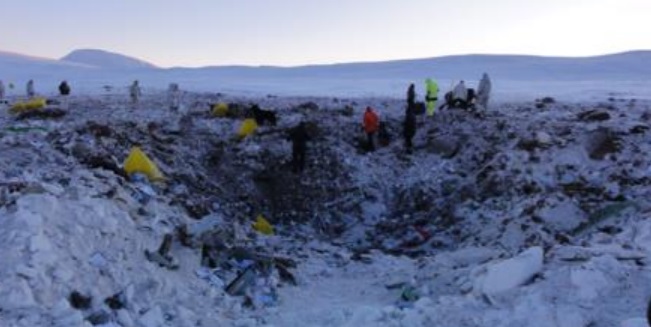 The flight recorders were recovered and readout. Calculations and simulations were performed to reconstruct the event and showed that the aeroplane’s flight control system operated normally.

The erroneous attitude indication on PFD 1 was caused by a malfunction of the Inertial Reference Unit (IRU 1).

When a miscompare condition is detected (out of limits), the miscompare indicator on both PFDs will flash amber for five seconds then come on steady. 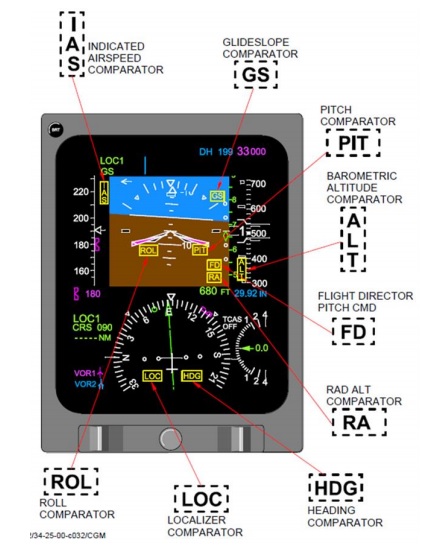 When the indicated pitch angle exceeds + 30 degrees, is less than – 20 degrees or when the roll angle exceeds 65 degrees a function called declutter is activated and all secondary information is removed. This means that e.g. PIT and ROL cautions in the attitude display are removed. 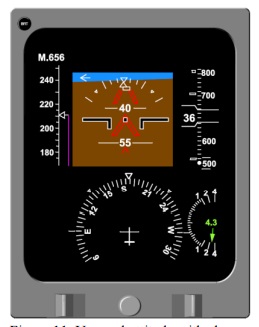 Red double arrows (chevrons) pointing up or down in relation to the artificial horizon line are displayed on the attitude scale pointing in the direction of recovery.

The purpose of clearing the PFD units from unnecessary information, and thereby providing the pilots with a better display of the situation during unusual attitudes, is easy to understand. It is however more difficult to understand why indications related to instrument errors are removed.

SHK has not found any descriptions in the operator’s manuals regarding the functions unusual attitude, declutter (non-essential information is removed from the display) or the chevron symbols (red arrows indicating direction of recovery). However, these items are described in the manufacturer’s Pilot Reference Manuals (PRM).

[The] PRM includes description of standard procedures for abnormal and emergency procedures. There are no regulatory requirements to provide a PRM. According to the manufacturer, the PRM is only used for training purposes.

The operator did not have access to PRM and the operator’s training organization did not use the manuals.

An observation of unfamiliarity with declutter was made by the UK AAIB  after a high altitude stall and loss of control involving Cessna 525A Citation CJ2+ N380CR in 2013 where the aircraft’s wings were damaged in overload due to pulling +4.48g during recovery (between the +3.6g ‘limit’ load and +5.4g ‘ultimate’ load).

Personnel from SHK conducted a reference flight on a certified CRJ- 200 simulator used by the operator for training and OPC. The simulator is a full flight simulator (FFS) with certificate number DK- 137 issued by the Danish Transport Agency.

In the simulator, in which the crew had trained, the corresponding indications were not removed.

SHK has not found, at the time of the accident, any information pertinent to TEM (Threat and Error Management) or UPRT (Upset Prevention and Recovery Training) in the operators training documentation.

UPRT was not mandatory at the time of the accident.  EASA introduced requirements for UPRT on 4 May 2016 [technically Acceptable Means of Compliance to ORO.FC.220 and ORO.FC.230: see ED Decision 2015/012/R].

The occurrence took place at 00:20, at a time when performance deterioration can occur due to fatigue. Sudden unexpected events that the individual has not previously experienced increase the demands on cognitive ability.

The crew was subjected to an unexpected change in the aircraft’s automation level with automatic disconnection of the autopilot, which occurred during a flight phase where you normally do not expect any changes.

The situation indicates that the pilots initially became communicatively isolated from each other. A contributing factor to this was the lack of regular training of procedures for unusual attitudes. Nor were there any clear rule-based behaviour to fall back upon. Therefore, the situation evolved into problem solving and improvisation, thus a knowledge-based behaviour.

On the possible effect of fatigue:

The investigation has found deficiencies in the pilots’ communication and difficulties in handling the situation. This type of difficulty of cognitive character can be seen during fatigue.

SHK have noted that the pilots’ duty hours did not exceed the flight time limitations. However there is no information available about the crew’s actual sleep time during the days preceding the accident.

Therefore no conclusions regarding fatigue or how fatigue may have affected the course of events is drawn from those risk factors.

Although there are risk factors related to fatigue present, for instance working during night hours, SHK in this event regard the cognitive emotional surprise effect that the pilots were subjected to, to outweigh the possible state of fatigue.

Additionally, in relation to the IRU the SHK report:

The manufacturer of these units has tried, through various tests, to recreate the malfunction supposedly originating from IRU 1. A complicating factor was that no NVM (Non Volatile Memory) from IRU 1 was found after the accident meaning that the number of possible scenarios is almost infinite.

Laboratory tests of reference systems have been conducted and confirm that the performance of the attitude output was in accordance with design specifications. Five simulations were performed with different erroneous inputs. An analytical test was also performed. None of the simulations or the analytical test had any correlation to recorded DFDR data. No mechanical failure or software error has been detected during the tests.

There are no scheduled maintenance requirements concerning the IRU in the maintenance program approved by the Swedish Transport Agency.

The manufacturer Northrop Grumman has stated that fault reporting [by operators] seldom contains detailed error descriptions regarding faulty units received for maintenance. The information is quite frequently written by the operators without any detail (e.g. failed unit without any other information). The lack of such detailed information could complicate troubleshooting and impair improvement of components.

In relation to the emergency response:

The accident was caused by insufficient operational prerequisites for the management of a failure in a redundant system.

They also note in relation to airworthiness:

The fact that fault descriptions regarding aircraft and its components are reported in a less detailed manner might imply that the faults will not be identified and corrected in an efficient way. This can in turn lead to a flight safety issue as, for instance, intermittent faults cannot always be detected by general tests.

The operator has taken the following actions:

The aircraft manufacturer has taken the action to revise the FCOM and introduce a de-clutter function description.

The Swedish Maritime Administration has also taken a number of SAR and mountain rescue coordination actions.

Aerossurance has extensive air safety, operations, certification, human factors and safety analysis experience.  For aviation advice you can trust, contact us at: enquiries@aerossurance.com