The investigation into loss of CHC Helikopter Service Airbus Helicopters EC225/H225 LN-OJF on 29 April 2016 and the similarities to the 1 April 2009 Bond G-REDL AS332L2 Super Puma accident, has created interest in the second stage epicyclic planet gears used in later members of the Super Puma family. 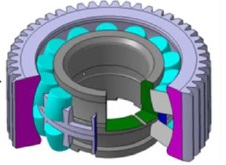 This article draws on a the most recent Accident Investigation Board Norway (AIBN – the Statens Havarikommisjon for Transport [SHT] in Norwegian) 102 page preliminary report on the LN-OJF accident, issued on 28 April 2017. 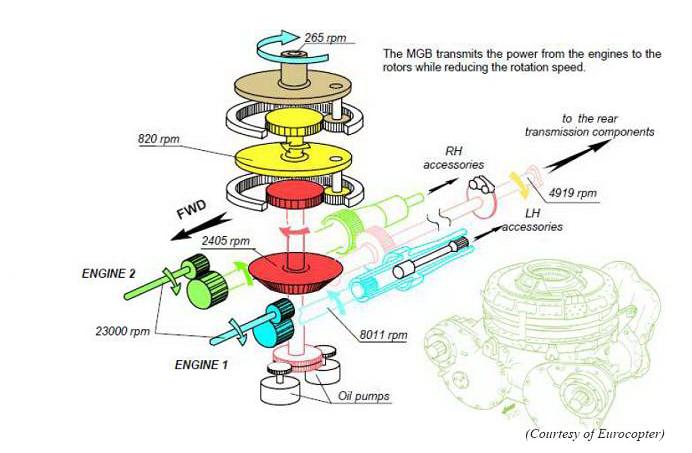 The second stage has eight planet gears (shown in the diagram below in purple), running between a sun gear (driven by the first stage epicyclic, shown in blue below) and a fixed outer ring gear (green below).

The Second Stage Planet Gear consists of an outer gear (light grey/purple in the diagram above, right), bearing rolling elements and cages (turquoise and light grey respectively) and a bearing inner race (dark grey/green).  The eight 2nd stage planet gears are mounted on a planet carrier that drives the main rotor.

The AIBN explain that: 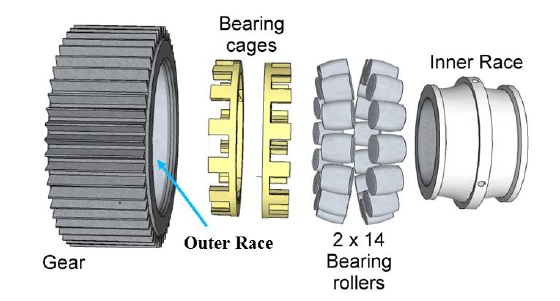 For industrial reasons, the aim was to have two suppliers…

…hence two bearing manufacturers were invited to tender for the AS332L2 planet gear bearings in 1986:

The invitation specified a number of criteria. One such criterion was that it should be based on the existing design used in the AS 365 Dauphin gearbox, a gear already produced by FAG. Specifically, the focus was on limiting spalling on the inner raceway, as this had been a problem with the AS 332 L1.

The planet gear, made from 16NCD13 steel, was classified as a “critical part”, i.e. a failure would be catastrophic and so subject to the extra requirements of certification requirement 29.602.

– Stiffness of the outer race and gear rim.

In addition, the differences in the finishing process performed by the suppliers can affect the outer race surface residual stress, with FAG having a significantly higher compressive stress at the race surface. 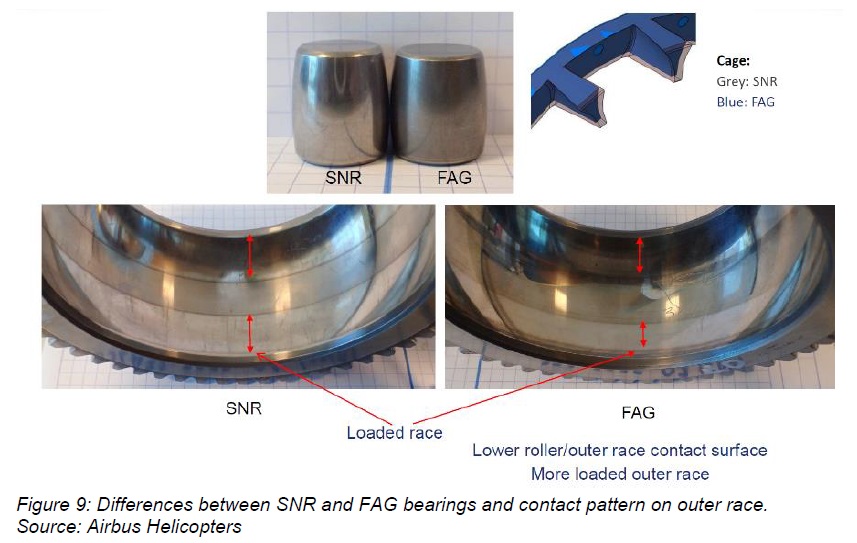 Both the fractured second stage planet gear from the G-REDL helicopter and the gear from LN-OJF were supplied by FAG.

In accordance with the requirements of Commission Regulation (EU) No 748/2012, Annex 1 (Part 21)…Airbus Helicopters is obliged to operate a Continued Airworthiness program to investigate and analyze component failures which may have had an adverse effect on the continuing airworthiness of its products.

Spalling is a phenomenon which can be found in rolling element bearings and is one of the most common reasons for bearing failure.

Following the accident, Airbus Helicopters has assessed the in-service experience of gears supplied by FAG and SNR respectively in the 2001 – 2016 period on the Super Puma AS 332 L2 / EC 225 LP / EC 725 fleet. 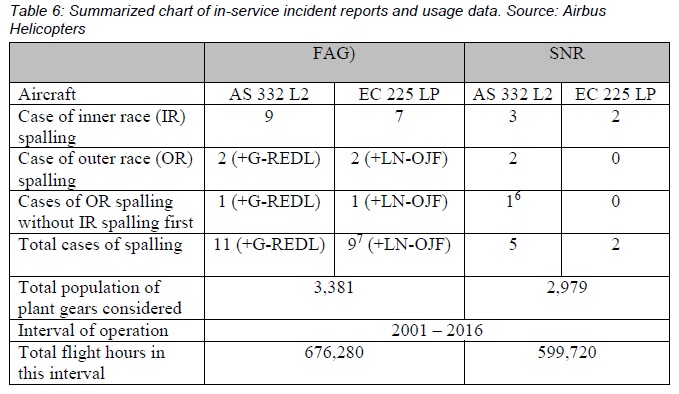 During the period considered, the distribution of fitted planet gears in the Super Puma fleet is 53 % for FAG and 47 % for SNR respectively. [T]here are more spalling events on FAG planet gears than SNR. [O]nly two second stage planet gears have been removed…as a result of spalling or micro-pits on the outer race during the period between 2009 and the LN-OJF accident in 2016.

…had its origin in the surface of the upper outer gear race of the planet gear. It started at the surface and propagated sub-surface with a shallow angle into the bulk material, turning towards the web of the gear teeth and the final through-thickness fracture.

CT scan showing a subsurface crack propagating from the RH spalling to the left. The red colour is a frame-by-frame mapping performed by hand to highlight the crack. (Credit: University of Southampton via AIBN)

The metallurgical examinations have given a reasonable, but not full, understanding… The fatigue cracks appear to have initiated from a surface micro-pit. The cause for the formation of the micro-pit has not been established. It has furthermore not been possible to get a comprehensive understanding of the different phases of the crack propagation. 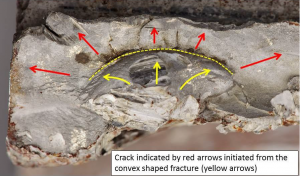 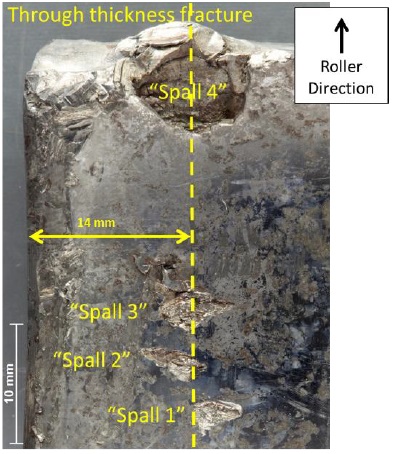 AIBN say “Spall 1, 2 and 3 have in total released a maximum of 28 mm² of metal particles”, though they can’t say when.  “Evidence indicate that spall 4 was released during the break-up phase”.

The AIBN currently believe there were “at least three different phases of the crack propagation”:

The driving force was probably not the same in these different phases. Observation on the LN-OJF crack propagation shows that the sub-surface cracks branch in different directions. Some of the cracks which deviate towards the race surface appear to stop before they reach the surface and thus do not release metallic particles (spalls). The investigation is looking at the possible relation between this phenomena and the progressively higher compressive stress in the area where the cracks stop. 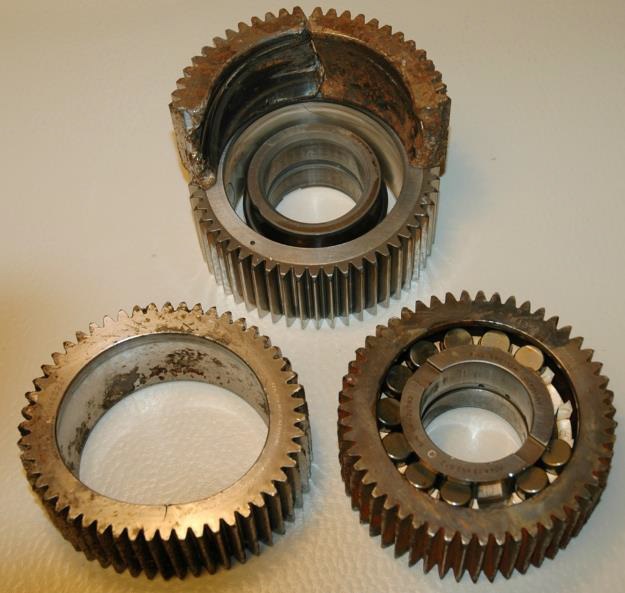 In depth review of the design and service data showed that one configuration [of planet gear] has higher operating stress levels that result in more frequent events of spalling, associated with rolling contact fatigue, while the other exhibits better reliability behaviour.

By limiting the type design to the gear configuration with lower stress levels and better reliability and specifying a reduced life limit, combined with more effective oil debris monitoring procedures and other operational controls, an acceptable level of safety can be restored. 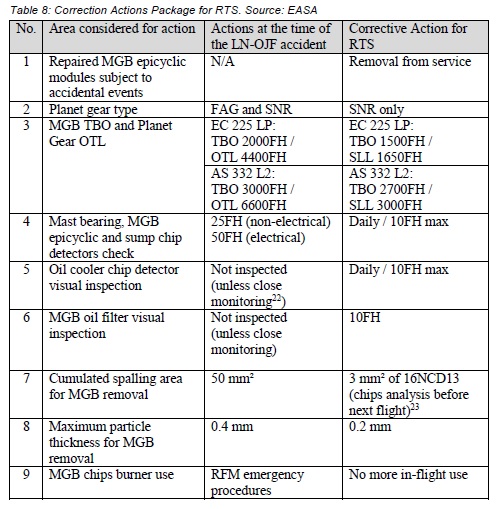 …the tragic accident involving an EC225 helicopter in Norway in April 2016 shows the importance of joining forces and together maintaining safety as an aviation community.

UPDATE 26 June 2017: Speaking prior to the Paris Airshow Airbus CEO Tom Enders said he was “hopeful” that the operational directives on commercial H225 flights in UK and Norway would be lifted “any time soon.  But at this time, after so many delays, we are not going to make any predictions.”  He commented that these national directives were “somewhat awkward” as “under existing agreements with EASA they should do this [lift their flight restrictions]”.

HeliOffshore report two EASB were released on 23 June 2017 on on the reduction of the maintenance task burden and improvement of MGB reliability.

In March 2017 the Rev. 4 of this EASB had called for a periodic oil cooler and filter check with different periodicities depending on the flight hours logged on the second stage planet gears. By the time we had announced that this measure will be temporary until the future introduction of an “ODM type” device. This device is called FFMP Full flow magnetic plug and has just been certified by EASA.

The Rev. 5 is currently only available for the H225 . A very similar definition is under development for the AS332 MK2.

As a reminder, this EASB Rev. 0 and 1 had called for

The new Rev. 2 introduces the following modifications (similar logic for AS332 Mk2):

1. increase of the TBO of the epicyclic module back to the usual timeline (2000 fh for H225/H225M )
2. return to AH (or approved repair center) at mid TBO of the epicyclic module for a progressive “reconditioning” and SLL on the second stage planet of 1100 fh to match the mid TBO
3. suppression of the modularity of the MGB in order to limit FOD ingestion and perform the reconditioning on the whole MGB.

The objective of this measure is to gradually realign the timelines of the different modules thus simplifying the maintenance forecast. During the mid TBO return AH will progressively take the opportunity to bring a certain number of improvements to the MGB and upgrade it with latest standard modifications. This “reconditioning” will reduce the probability of unscheduled removals before the TBO is reached, thus improving aircraft availability and avoiding operation disruptions.

UPDATE 7 July 2017:  The Norwegian and UK CAA operational restrictions are being lifted.  The NCAA in their Norwegian language press release (issued one hour after the UK one) post a ‘timeline’ (PDF version – which specifies a 14 July 2017 date, suggesting issue earlier than originally expected) that identifies recent changes: 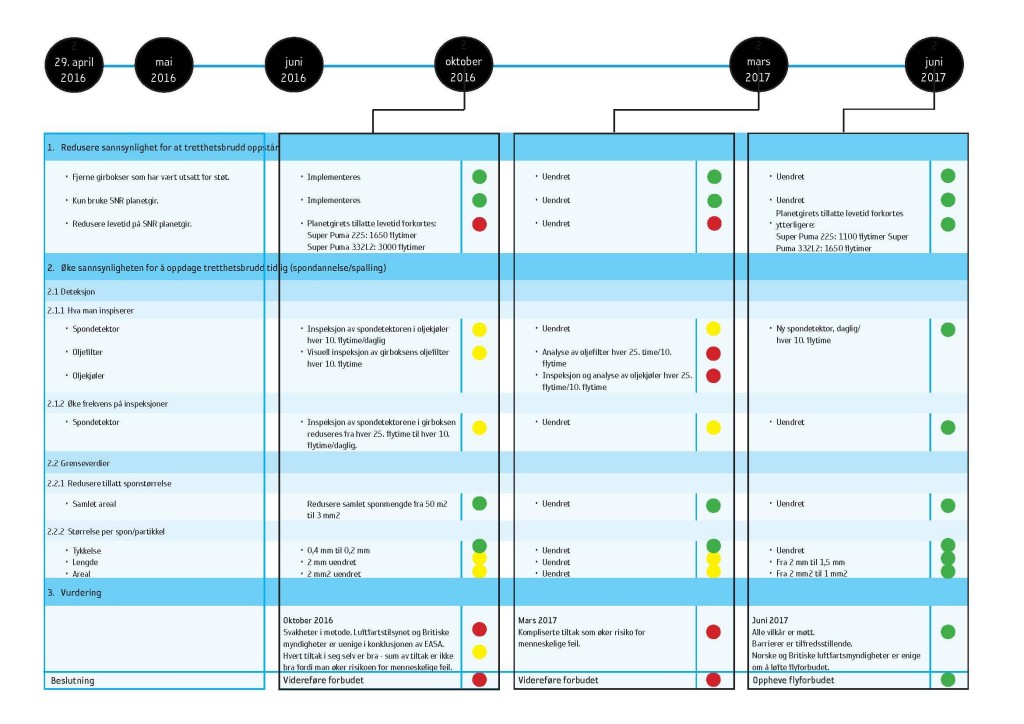 The additional restrictions described include a tighter life limit on the remaining gears (1100 flying hours for the H225 and 1650 for the AS332L2), an MGB Time Between Overhaul reduction, the FFMP in the oil return line inspected daily (or 10 flying hours) and a reduced critical debris size (from a length of 2 mm to 1.5 mm and an area of 2 mm² to 1 mm²).  Its the FFMP modification that is the reason the regulators are able to say flying won’t resume immediately in the UK or Norway.  It however, based on the NCAA document, appears to be seen as less vulnerable to human error, addressing a key concern.

UPDATE 20 July 2017: The UK and Norwegian restrictions are officially lifted.

For the reason described above, this AD retains the requirements of EASA AD 2017-0111, which is superseded and requires additional work for the EC225 LP helicopters and installation of an FFMP device for AS 332 L2 helicopters with adaptation of the MGB oil filter and oil cooler inspections.

The AIBN investigation continues.  It will further examine the response to 2009 G-REDL accident.  See:

It should be noted that in accordance with International Convention:

The purpose of AIBN investigations is to clarify the sequence of events and factors which are assumed to be of importance for the prevention of transport accidents. The AIBN shall not apportion blame or liability.

A draft of the final report on the tragic accident near Turøy has been for consultation with the parties involved in the investigation. The consultation period is over and the AIBN is working on the comments. It is solely the AIBN’s decision whether or not a comment shall be accepted and incorporated into the final report. This is a laborious and time-consuming process, which will also involve clarifications and consultation with external contributors.

At the time being, we are unable to present a firm date for publication of the report. The work will continue without letup until the final report is ready for publication.

From this investigation there are significant lessons to be learned related to gearbox design, safety assessment, fatigue evaluation, condition monitoring, certification requirements and continued airworthiness of the AS 332 L2 and the EC 225 LP helicopters, which also could be valid for other helicopter types.

Based on this investigation, the AIBN issues 12 safety recommendations.

Prior to 2016, the available degree of scientific and technical knowledge meant it was neither foreseeable nor foreseen that a crack in a plant gear could propagate in a sub-layer, and as a result generate very low levels of detectable particles.

With knowledge gained from this investigation, Airbus Helicopters has introduced a series of safety measures on the H225. Some of the technology that has been developed is ground-breaking for the helicopter industry.