There are a number of nations introducing the AgustaWestland AW101 into VVIP service.

In the VVIP role the large AW101 cabin has the flexibility to be fitted out in a wide range of configurations. One easy way to visualise potential cabin layout options is now offered by 3D printing techniques.  The images below shows a range of single VVIP seats, double staff seats, a medical station (in place of the 4 side facing seats above), galley, toilet and even a shower.  The shower though is limited to ground use only! 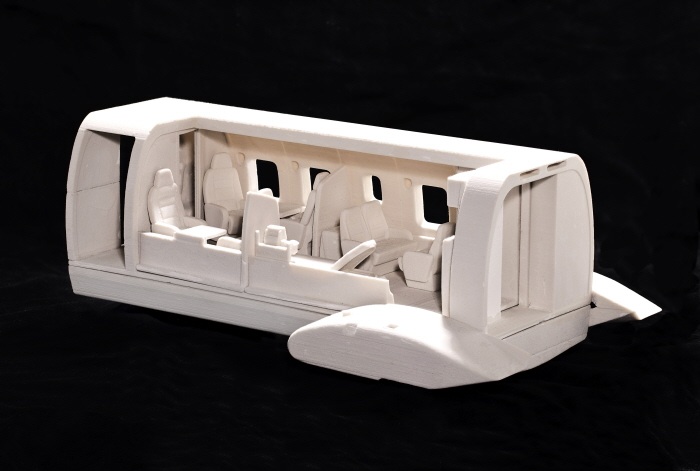 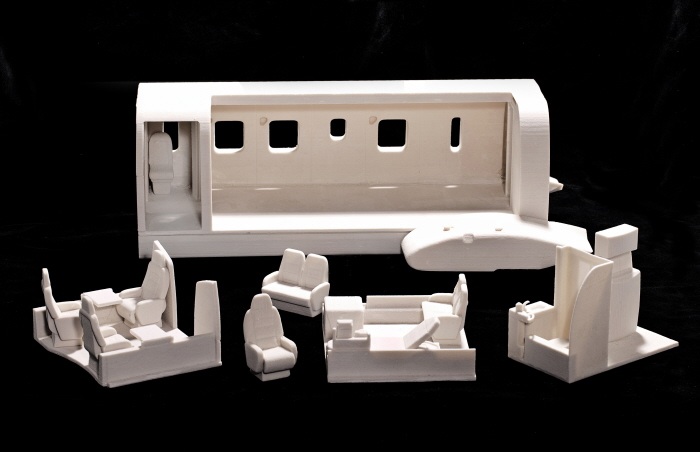 The type entered service in the VVIP role in 2013 in the oil and gas rich Central Asian republic of Turkmenistan.  They received the first of two in March 2013.

The first flight has recently taken place at Yeovil of the first of two VVIP AW101′s to be operated by the Nigerian Air Force (with a Defensive Aids suite visible and national marking covered).

Meanwhile, one of the aircraft originally intended for India, AW101 Mk641 ZR343, shown here with British Prime Minister David Cameron, was conducting VVIP movements for the NATO Summit in Cardiff in September 2014.

Other VVIP customers for the AW101 are reported to include Algeria and Saudi Arabia (each with a pair of VVIP aircraft) and, although earlier EH101 variants have been civil certified, the company is reported to be seeking civil certification for a more current variant.

There are however a wide range of developments underway at the moment: The Royal Navy (RN) are taking delivery of the upgraded Merlin HM2 at RNAS Culdrose, being declared operational four months ahead of schedule in July 2014.  This followed the largest-ever deployment of Merlins in Exercise Deep Blue in the Eastern Atlantic Ocean.

Nine aircraft flew 480 hours. during the deployment on HMS Illustrious in June 2014 (shortly before her retirement).  These aircraft have been equipped with a new mission system and avionics suite as part of the Merlin Capability Sustainment Programme (MCSP). In the longer term the Royal Navy will be taking over the Royal Air Force (RAF) Merlin HC3, after a programme of ‘marinsation’ (ultimately to create the Merlin HC4), to replace the Sea King HC4s of the Commando Helicopter Force.

UPDATE 30 September 2014 The transition has started with 78 Squadron RAF standing down at RAF Benson. Flight trials will soon be underway of both the Thales and Lockheed Martin Merlin based solutions to the RN’s Cowsnest requirement to replace the  Airborne Surveillance and Control (ASaC) Sea Kings Mk7s.

A video of the Royal Danish Air Force Merlins operating in the medevac role in Afghanistan has recently been released:

The Royal Norwegian Air Force will receive the first of 16 AW101s for the Norwegian All Weather Search & Rescue Helicopter (NAWSARH) requirement in 2017.  The AW101 has been in SAR service with the Royal Canadian Air Force as the CH-149 Cormorant for over 12 years. The Portuguese Air Force Esquadra 751 has demonstrated the AW101′s SAR capability with missions to a radius as great as 380nm.  In particular, in February 2013, they completed a challenging 360nm night-time rescue mission to rescue a casualty in the water in the mid-Atlantic, after a yacht had capsized.  Deploying from Lajes in the Azores, the crew faced an 8.5 hour flight as the 360nm was from the intermediate refuelling stop at Santa Maria in the Azores.  The standard Portuguese SAR fuel load is 3,000kg fuel load (three hours cruise at 120kt plus 400-600kg reserve).  For ultra long-range missions, range is extended through completely filling the internal tanks and adding an internal ferry tank (with an extra 900kg of fuel). The total fuel on board when departing Santa Maria was around 5,000kg and the helicopter. Video of a more ‘modest’ daytime 185nm rescue:

The type is in service in Italy and Japan also.

UPDATE November 2014: AgustaWestland has recently shipped the first of two VIP AW101s to the Nigerian Air Force, via an AN124 Ruslan from London Stansted.  The helicopter was transported on a custom-built cradle designed to enable the aircraft to fit into the AN124.

UPDATE 25 November 2015: Helihub report a sale of three to Indonesia.

UPDATE 2 December 2015: The Indonesian sale is now reported to have been vetoed.

Aerossurance is an Aberdeen based aviation consultancy with a proven background in helicopter design, airworthiness and operations. For expert support on helicopter selection, modification and certification, contact Aerossurance: enquiries@aerossurance.com