Category A EBS was a recommendation from the CAA Review, which resulted in the CAP1145 report (‘Safety review of offshore public transport helicopter operations in support of the exploitation of oil and gas’).  It is also being examined as part of the European Aviation Safety Agency (EASA) Rule Making Team RMT.0120 on Helicopter Ditching.

Dutch company, Biardo Survival Suits B.V., a manufacturer of survival suits and lifejackets, has received a UK CAA approval for the CA-EBS integrated with their EASA approved LRS002 lifejacket.  This system uses a SCUBA style mouth piece and stores the bottle under a sealed cover.

Meanwhile Norwegian manufacture Hansen Protection gained approval in October 2014 for a Cat A EBS that can integrate with their combined SeaAir suit / lifejacket, according to UK CAA in a prentation given in early December at the European Aviation Safety Agency (EASA) 8th Rotorcraft Symposium.  It is also apparently compatible with the SeaAir Barents suit and the company’s SeaAir Europe suit and SeaLion lifejacket. 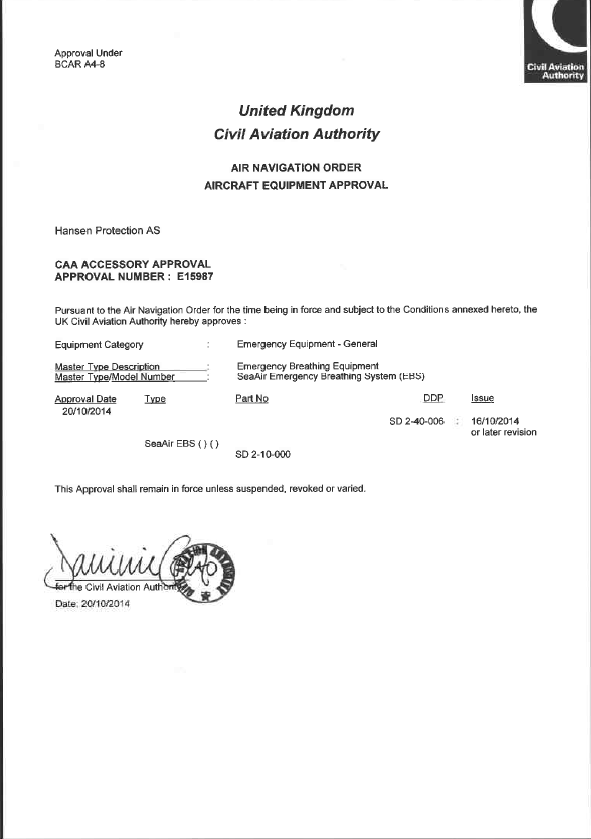 The first UK CAA Cat A EBS approval was granted to UK Company Survitec on 27 June 2014.  Aerossurance has previously covered the development of this CA-EBS, which Survitec integrated with their new Mk 50 Lifejacket:

Aerossurance is an Aberdeen based aviation consultancy.  For expert advice you can trust on helicopter safety, equipment certification and survivability matters, contact: enquiries@aerossurance.com