Rapid Progress with a Category A EBS

One of the most urgent initiatives currently underway in UK offshore helicopter safety is the introduction of Category A Emergency Breathing Systems (EBS).  Progress was discussed at Oil & Gas UK’s annual aviation seminar in Aberdeen on 4 June 2014.

In 2013, the UK Civil Aviation Authority (CAA) issued CAP1034 which reported on the experimental work performed in the development of a technical standard for EBS and two draft technical standards.  This work followed on from CAA Paper 2003/13, study of the development and implementation of the various forms EBS, and is being presented to the European Aviation Safety Agency (EASA) helicopter ditching Rule Making Task RMT.0120 working group. The most capable Class A technical standard is for a system that could be deployed underwater after a sudden, unexpected immersion (effectively a water impact rather than a capsize after a deliberate ditching).

Following the CAA Review, which resulted in the CAP1145 report published 20 February 2014, the CAA has reversed its position and are now to require Category A EBS (unless the helicopter a ‘side floating capability’ – something researched but not yet trialled on any helicopter). The current combined lifejacket and hybrid re-breather Emergency Breathing System, the LAPP Jacket was introduced around 10 years ago as an industry initiative, at a time when CAA declined to make EBS a mandatory requirement.  The LAPP Jacket, would have needed modification to meet Category A.  So a decision was taken to take the opportunity to develop a new lifejacket / EBS combination.

At the recent seminar the Oil & Gas UK led activity to introduce the new lifejacket and Category A EBS was discussed.  Interestingly despite some relatively arbitrary and tight regulatory deadlines posed in CAP1145, a decision was made NOT to give the working group a specific date target.  Instead the focus was on getting the design and implementation RIGHT.  Due to close liaison between all the stakeholders involved, a design activity that normally would have taken in the order of 2 years is likely to be achieved in closer to 6 months, illustrating the true value of working in partnership.

The EBS is a Compressed Air EBS (CA-EBS) with a pressurised P-STASS (Passenger – Short Term Air Supply System) style gas bottle mounted on the right hand side  of the Mk50 Lifejacket (a personal locator beacon can be fitted to the left hand side of the Mk50 Lifejacket).  P-STASS is widely used by the military and by Fire & Rescue Service Maritime Incident Response Groups.

Based on feedback from trials, a decision was made to use a plain oval tube for the CA-EBS rather than a more traditional diver style mouth piece.  The nose clip, always a fiddly feature of the LAPP Jacket, appears to have been massively improved by being more rigidly attached to the mouth piece.  The certification documentation was expected to be submitted within days of the seminar.  Oil & Gas UK have already funded production of long-lead items. 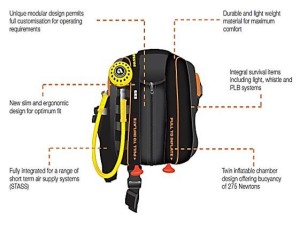 It was emphasised that practical training with this kit did not activate the health and safety criteria for diver training.  The initial roll-out is expected to involve ‘dry’ training lasting in the order of an hour. Update: On 17 June 2014 the Helicopter Safety Steering Group (HSSG) issued their latest Newsletter that explained:

The first batch of approved equipment is expected to arrive at the start of July, which will allow training to commence from mid-July.  The training and deployment plan is as follows:

Booking for training sessions with the new EBS will be implemented on or around 7th July.  An online training video will be available via the Step Change in Safety YouTube channel.

Before going offshore, passengers will be required to demonstrate that they know how to:-

Step Change in Safety have also made a video of an earlier available presentation here.

On 1 July 2014 Step Change in Safety issued a further update:

On 7 July 2014 Step Change in Safety issued a further update that detailed the systems performance and further roll-out plans.

On 10 July 2014 it was announced that the CA-EBS has been CAA approved on 27 June 2014 under the accessory approval requirements of British Civil Airworthiness Requirements (BCAR) A4-8.  A video comparing the LAPP with the Mk50 with CA-EBS can be found here. 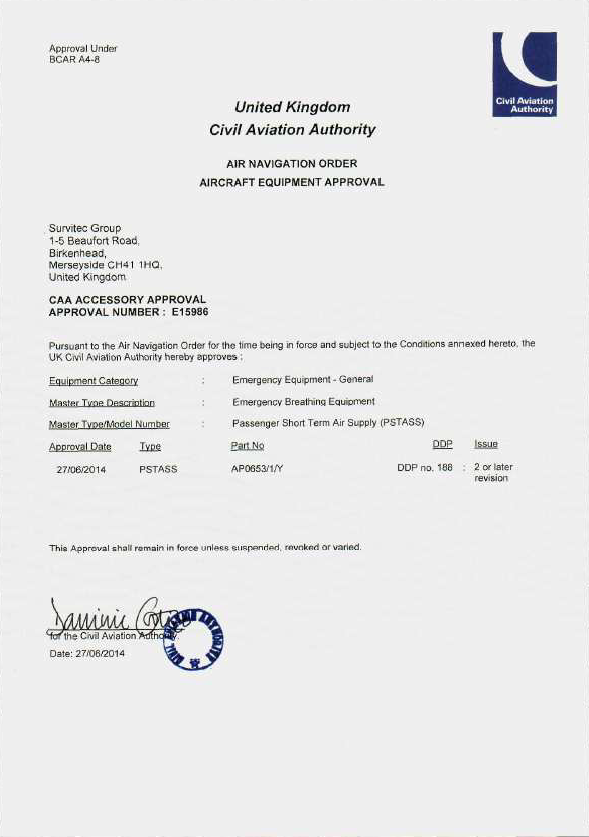 The OPITO standard for CA-EBS Initial Deployment Training can be found here.

On 18 August 2014 the first passenger flight was made with the equipment from Scatsta, in the Shetlands.  Deployment from Norwich, Humberside and Blackpool starts on 25 August 2014.  A total of 35,000 people have now been trained.  Les Linklater, Team Leader, Step Change in Safety said:

A number of people in different organisations have demonstrated their unwavering commitment to safety to ensure the EBS is deployed safely and in the required timeframe.  Although the EBS is a small part of a much larger aviation safety picture, we must apply the same amount of dedication and commitment to everything we do to make the UK the safest oil province in the world.

On 1 September 2014 it was reported that almost 52,000 offshore workers have had the conversion training.  The deployment of the new Mk 50 Lifejacket and CA-EBS starts in Aberdeen today.  As of today, no passengers may sit on the inside seats of an offshore helicopter without the Category A EBS.  From 1 January 2015 no passengers may fly offshore without a Category A EBS, however the equipment is being provided to all passengers now. On 14 October 2014 CAA issued a new Operational Directive. Energy Voice interviews Step Change in Safety team leader Les Linklater.

UPDATE 18 December 2014: Users have been warned not to over tighten the ratchet knob when checking the CA-EBS bottle.

UPDATE 5 March 2015: Performance is discussed in an HSSG presentation to Step Change in Safety event.

UPDATE 13 March 2015: Survitec received an award for their CA-EBS work from SPE.