The critical importance of rebuilding confidence in helicopter transport was the theme for Oil & Gas UK’s annual aviation seminar in Aberdeen on 4 June 2014.  Oil & Gas UK is the organisation that represents the entire UK offshore industry and Aerossurance is a member of Oil & Gas UK. 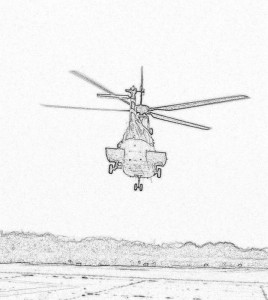 Chris Allen, Petrofac’s Group Director for Safety and Step Change Helicopter Safety Steering Group (HSSG) representative on the new Civil Aviation Authority (CAA) Offshore Helicopter Safety Action Group opened the seminar.  He emphasised that not only do helicopter operations need to be safe but they need to be perceived as safe, hence the focus of this seminar was one of building confidence.  He emphasised that confidence is something that has to be earned.

Chris Allen highlighted the advances since he made his first offshore flight in an S-61 in 1985, commenting that though they had survival suits, there was a risk of burn holes in the suits as smoking onboard was still allowed!  He also commented on the safety advances in new helicopter types becoming available and how the industry must not only demand improvements but also be prepared to implement them.  He made the point, echoed by other speakers such as John Taylor of union UNITE, that although survivability matters are important, the prime focus needs to be on keeping aircraft flying safely.

Addressing ‘the right hand side of the bowtie‘ can only increase confidence in the ability to escape and survive after an accident. Actions on the ‘left hand side’ increases confidence in completing the flight accident free.  Aerossurance was reminded of a cartoon presented at a Royal Aeronautical Society (RAeS) conference on Flight Safety in 1991 that was intended to show the results of over focusing on the ‘right hand side’. 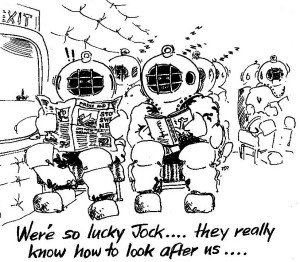 The CAA stated that ‘recent accidents are serious cause of concern’ and, perhaps tellingly, that they left the CAA with what they called ‘no option but to act’.  It was also conceded that the CAA Review, which resulted in the CAP1145 report (‘Safety review of offshore public transport helicopter operations in support of the exploitation of oil and gas’) and its 61 actions and recommendations, was done hurriedly.  Those CAA comments suggested to some in the audience a ‘knee jerk reaction’ ‘after being off the pace’ on offshore helicopters (as other participants put it).

It was also revealed there was specific direction NOT to consult other stakeholders on the report before publication.  In many ways that is an odd admission, as CAA has made great play of one action, that of creating a Norwegian style, collaborative ‘forum’ for offshore helicopter safety.

Some of the CAP1145 timescales were denounced as ‘ill thought out’ by John Taylor of UNITE in his presentation.  Several participants pointed out other CAA ‘actions and recommendations’ in CAP1145 that were already in-hand by EASA and industry.

Hopefully now the report has been published there will now be a greater focus on working in partnership to improve safety.

The CAA described the resulting Offshore Helicopter Safety Action Group, its two sub-groups and their relationship with the CAA.  The OHSAG has met ‘a couple of times’ and it was explained that the minutes will be made public (minutes from the first meeting on 20 March 2014 are currently on the CAA web site). 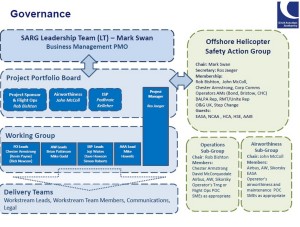 In relation to helidecks, the CAA also commented that they were not looking to employ a new team of helideck inspectors, perhaps indicating a Qualified Entity status for outsourced inspection (such as CAP553 BCAR A8-22, as currently being used in the Unmanned Air System sector).

Most of the presentations from the seminar are now available here: http://www.oilandgasuk.co.uk/events/event.cfm?frmEventID=583

Aerossurance will highlight other aspects of this seminar in future articles, in particular more on significant developments on survivability that neatly illustrate the benefit of working in partnership.

One article on Category A EBS, is here: /news/progress-class-ebs/

Another, on passenger size and egress is at: /helicopters/size-isnt-everything/

Aberdeen based aviation consultancy Aerossurance has a proven track record in helicopter safety, contracting, airworthiness, survivability and safety analysis.  For aviation expertise you can trust, contact us at: enquiries@aerossurance.com