EC130B4 Loss of Control on Take-Off in Dubai

On 22 January 2014, Airbus Helicopters EC130B4 helicopter A6-DYR of Helidubai crashed after suffering a loss of control departing the heliport at the Atlantis Palm hotel in Dubai, UAE. 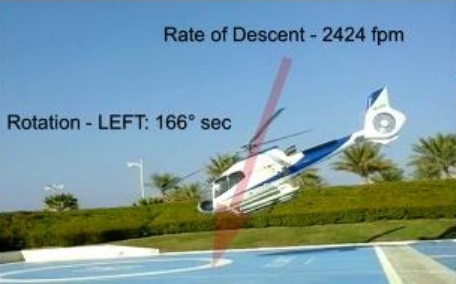 The Air Accident Investigation Sector (AAIS) of the UAE General Civil Aviation Authority (GCAA) say in their investigation report that the aircraft was positioning back to Dubai International Airport at the end of the day’s flying programme. Onboard were the Pilot and, as a passenger, the operator’s Helicopter Landing Officer (HLO) who was in charge of ramp handling at the hotel heliport.  They say:

The flight required lifting to a hover position [while orientated at approximately 200°], a pedal turn to a northerly heading, and a standard climbing departure from the heliport.

On lift-off, the Pilot simultaneously pulled power into the climb while applying continuous left pedal, turning the Aircraft counter clockwise (to the left).

Left: handheld video. Right: reconstruction of pilot view overlayed with flight data. The start of the takeoff sequence. The Aircraft picked up into a low hover and immediately began to turn to the left (Credit: GCAA)

This turn continued past the optimal northerly heading for departure, with the Aircraft turning rapidly counter clockwise. The turn rate accelerated, increasing to approximately 180° per second [threes time the Flight Manual Limitation] at a height of approximately 22 meters (72 feet) above the heliport.

The turn rate accelerated and the aircraft began to climb (Credit: GCAA)

The turn continues with increased turn rate and the height above the ground is increasing (Credit: GCAA)

The Aircraft then descended rapidly, pitching forward, while continuing in a counter clockwise turn prior until impact with the heliport.

The Aircraft was continuing to turn at about 182° per second. The rate of descent increased significantly (Credit: GCAA)

The dynamic condition of the Aircraft immediately prior to the heliport impact was the following:
Rate of Descent = 2423 feet per minute, Rate of Rotation = 166º per second (Credit: GCAA)

The Aircraft impacted the heliport vertically, with a level attitude, minimal forward speed, with approximately 5° nose down attitude and a rapid rate of descent (ROD), until impact. 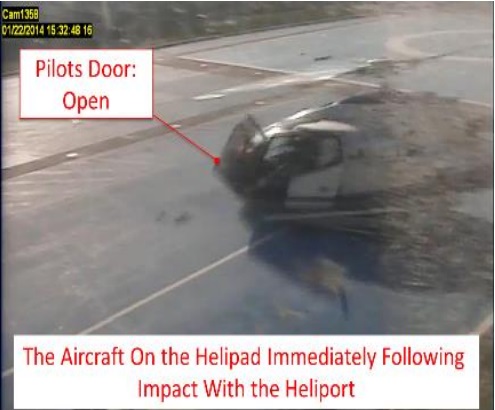 …the skids failed under the vertical load…however they were splayed outwards with the area of the fuselage under the Aircraft between the skids in constant contact with the heliport surface. 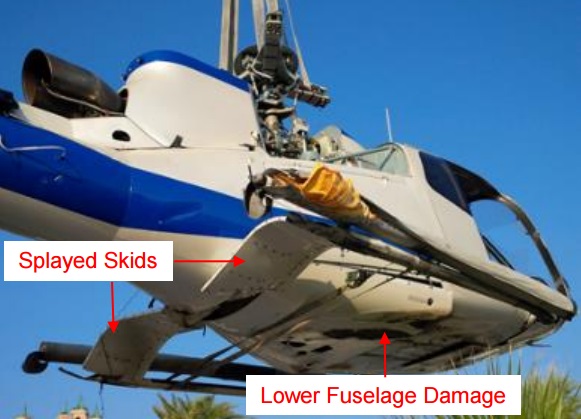 There was a fuel drain decanting sump with a water drain valve located in this area.

There was significant fuel loss from the fuel tank water drain valve, which was damaged following the hard landing, which had dispersed around the Aircraft. There was no post-impact fire. 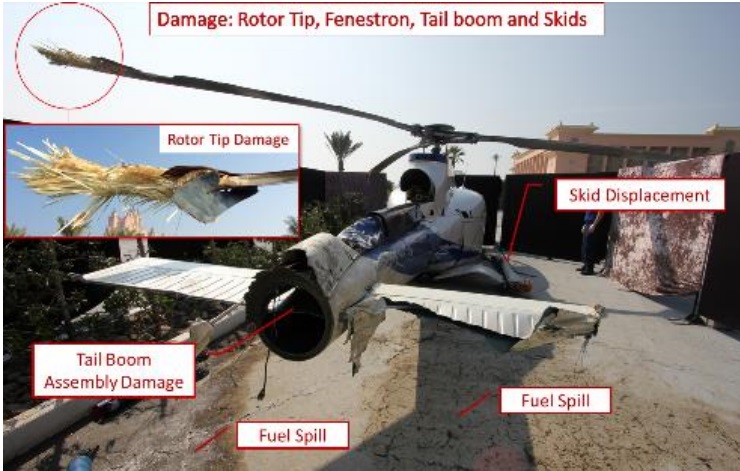 The Pilot and HLO were both incapacitated from injuries resulting from the combination of the rapid vertical deceleration and that both crewmembers [sic] were unrestrained by their shoulder harnesses due to the crew seats lowering [as designed so as to absorb impact load, though the AAIS also comment that the inertia reel lock at above 1.5g and the rotational forces would have potentially induced some slackness].

…the Fenestron tail assembly was damaged. With the engine throttle control set to the ‘Flight’ indent position and with some pitch on the main rotor blades, the engine continued to develop power and torque. As the Aircraft was engaged in a counter clockwise rotation following the hard landing and the Aircraft was under power, it began an uncontrolled rapid counter clockwise rotation. 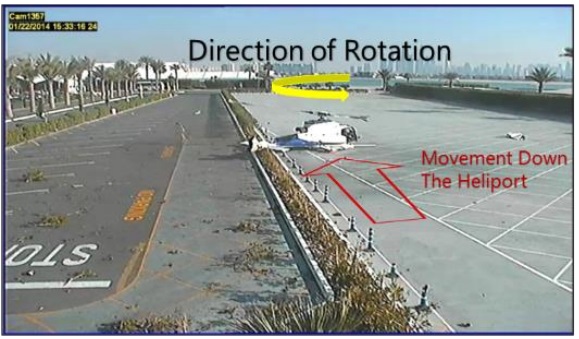 The Aircraft rotated approximately 50 times on the heliport prior to contacting a drainage curb at the edge of the heliport which arrested the rotation and stopped the Aircraft from moving further. The Aircraft remained in that position with the engine running and the damaged rotor blades turning. 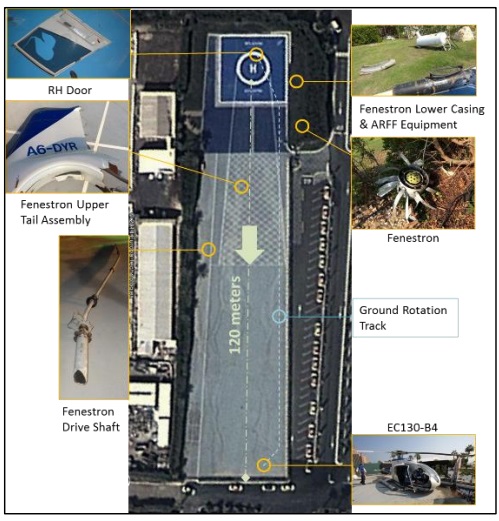 The heliport ground crew were then able to shut down the engine and assist with removal of the incapacitated crew. The Pilot and the HLO sustained serious injuries…

The AAIS note that the Emergency Locator Transmitter (ELT) did activate but it was still coded to the aircraft’s previous registration and owner.

The Operator’s SMS was fully implemented and structured on accepted SMS international best practice and approved by the GCAA. One aspect of the risk assessment that could be enhanced was the introduction of a risk analysis based on integrated Flight Data Monitoring (FDM) program to monitor safety occurrence and trends.

They go on to note that this is complicated when there is no requirement for the aircraft to be quipped with a Flight Data Recorder (FDR).  They note that the European Aviation Safety Agency (EASA) RMT.0271 is examining recording technologies for smaller aircraft.

The Accident was not caused by loss of tail rotor effectiveness or by a mechanical systems failure.

The Investigation believes that the Pilot operated the Aircraft in negligent and reckless manner on the departure of the flight by turning the Aircraft rapidly. This overaggressive maneuver could also be considered as an aerobatic maneuver.

This is an unusually harsh tone in an ICAO Annex 13 style accident report in light of the earlier statement:

The sole objective of this Investigation is to prevent aircraft accidents and incidents. It is NOT the purpose of this activity to apportion blame or liability.

The AAIS note that specifically the Flight Manual “forbids aerobatic maneuvers” and that EASA  defines aerobatic flight as:

Intentional maneuver involving an abrupt change in an aircraft’s attitude, an abnormal attitude, or abnormal acceleration, not necessary for normal flight.

The AAIS determined the causes of the accident to be:

The AAIS say the contributory factors were:

Prior to the final report being issued the operator has take a number of actions including:

The heliport owner had made a series of improvements too.