The European Aviation Safety Agency (EASA) is proposing introducing Emergency Floatation System ditching limitations into Rotorcraft Flight Manuals (RFMs) and that these are then a limitation for operations.   This is in broad alignment with a UK CAA Safety Directive effective 1 September 2014.

On 30 May 2014 EASA issued a Proposed Airworthiness Directive (PAD) for public comment.  That PAD (14-089) focused on EU helicopter Type Certificate Holders (TCHs).  On 4 August 2014 EASA issued a PAD (14-130) to address non-EU TCHs.  These will support European rulemaking on offshore helicopter operations (on which EASA published the Comment Response Document on 15 August 2014).  EASA note that in accordance with “Paragraph 4.a of the Essential Requirements for air operations, aircraft must be operated within their certification limits”.

The ADs introduce a limitation in the RFMs based on the Sea State that the ditching performance (i.e. the water entry and floatation stability) the helicopter has been certified to.  Some more recent helicopters do include this information, but the ADs ensure consistent data in all RFMs.

EASA have chosen to continue to use the World Meteorological Organisation (WMO) scale of Sea State, although also stating the associated wave height range.

According to the WMO:

As far as weather observation is concerned, while sea state reporting remains a legal international practice, with modern in situ observing techniques we try to avoid using sea state or Beaufort scale as we prefer direct readings from appropriate instruments…

Swell is created by winds as much as a hundred miles away or more, is relatively unidirectional and results in wavelengths of a hundred meters or more and wave periods of 9 seconds or more.  The distance the winds travelled to create swell is known as the fetch.

Depending on the local geography and weather conditions, waves can be created by different combinations of local winds and swell.  So for example in the Southern North Sea, fetch is limited by the adjacent land masses and waves are predominately driven by local winds.  West of Shetland, in the Atlantic, the fetch is great and swell predominates.

You will notice that peak wave height of Sea State 6 is 240% greater than for Sea State 4. 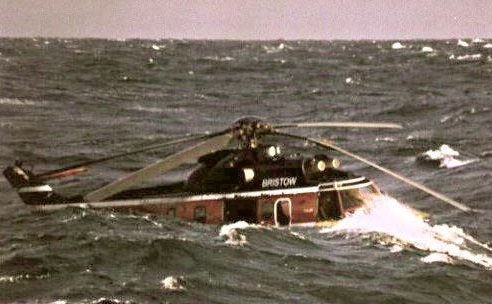 UK Civil Aviation Authority CAA Paper 2005/06 (Summary Report on Helicopter Ditching and Crashworthiness Research) gives some statistical data on sea states along a series of North Sea and West of Shetland helicopter routes.  According to CAA figures, a Sea State 4 capability would be exceeded  27.7% of the time, averaged over six North Sea routes, compared to just 1.4% with a Sea State 6 capability.

In the CAA CAP1145 report, which followed the recent CAA Offshore Helicopter Safety Review, Action 6 related to a restriction on operation in high seas states.  This was ultimately turned into regulation in Safety Directive SD-2014/001, with an adjustment be based on significant wave height to avoid any uncertainty related to the actual size of the waves.  From 1 September 2014 offshore flights can only be conducted in the UK if:

…the significant wave height of the sea over which the flight will be conducted to or from an offshore location does not exceed the certificated ditching performance of the helicopter.

EFS installed under Supplemental Type Certificates may differ but the ADs require appropriate limits to be included in the RFM supplement for the STC with Sea State 4 to be assumed unless proven otherwise.

UPDATE: 14 October 2014 CAA issued a new Operational Directive. Note this has since been revised and issued several times.

Aberdeen based aviation consultancy Aerossurance has extensive helicopter safety and operations experience.  For advice you can trust on helicopter airworthiness, safety, regulatory or survivability matters, contact us at enquiries@aerossurance.com