Health and Usage Monitoring Systems (HUMS) were first introduced 25 years ago as a safety enhancement for offshore helicopters in the UK and Norway.  Even in the early days of HUMS the prize of ‘maintenance credits’ was envisaged: i.e. using the HUMS data to reduce invasive physical inspections and disassembly (with the inherent risks of maintenance error) and to tailor maintenance around the actual usage of an individual helicopter.

Such maintenance credits were the topic of several presentations at the 9th Rotorcraft Symposium of the European Aviation Safety Agency (EASA) held in Cologne in December 2015. 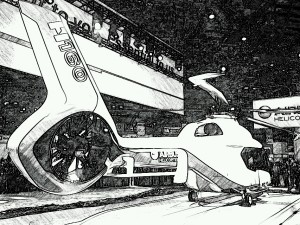 The potential was demonstrated by Emmanuel Laillet and Sophie Hasbroucq of Airbus Helicopters.  In two presentations they discussed a significant HUMS usage credit example, namely customised service life limits.  HUMS data would be used to recognise flight regimes and record the actual usage in different conditions.  Lailett noted that:

The typical offshore spectrum is much less severe than our certification reference spectrum.

Data presented from initial Airbus Helicopters studies suggested that some component life limits set by this single reference spectrum are being set at half or even a third of the true service life limit of a component flown to a realistic spectrum for the missions flown. This is consistent with data from a 1990s study that Aerossurance has access too.  It is also possible that flying particularly demanding mission profiles will reduce individual life limits (a sort of ‘maintenance debit’) but thus improve safety for some extreme missions.  A better understanding by operators of what manoeuvres create fatigue damage could also drive refined operational procedures to avoid unnecessary damage or at least equalise it across a fleet.

An interesting question is how much of such usage monitoring will be via a traditional HUMS approach and how much via a Helicopter Flight Data Monitoring (HFDM) approach.  It is often forgotten that the wildly successful UK Civil Aviation Authority (CAA) Helicopter Operational Monitoring Programme (HOMP) HFDM development, launched with with Bristow Helicopters in 1999, followed an earlier research project to analyse usage spectrum via FDR downloads.

Regulations and Making It Happen

One brake on the use of HUMS this purpose has been the perception that certification of such credits would be highly problematic due to onerous interpretations of AC 29-2 Miscellaneous Guidance (MG) 15 in relation to ground station software in particular.

At this year’s Rotorcraft Symposium, EASA’s Alastair Healey discussed maintenance credits further.  He highlighted even the term ‘credit’ is rather unique and of its time (when HUMS were being introduced at the operator’s behest in the early 1990s as a safety improvement).  It is in fact derived from an avionics certification caveat that the HUMS installation were initially approved as not hazarding the aircraft but that the system functionality was not (‘no hazard no credit’).  His presentation can be downloaded as part of a large zip file from the EASA website or here.

Last year we reported that the Federal Aviation Administration (FAA) planned to review MG 15.  At this year’s EASA symposium the FAA’s Jorge Castillo discussed past FAA HUMS research and the plan for MG15.  That presentation can be downloaded here. 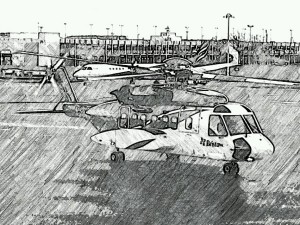 Encouragingly the FAA will incorporate, by reference EASA AMC 29.1465 for VHM systems (as we hoped last year).  More importantly he confirmed that the proposed change would remove references to independent verification and DO-178 requirements for ground station software.  Public consultation on the changes is expected in November 2016.

In advance of those changes Sikorsky has been able to use HUMS data to do one off extensions to individual main rotor hub lives.

A select group of specialists, including Aerossurance, were invited to attend a workshop on maintenance credits at EASA later the same day that continued the theme of positive discussion with strong interest in enabling the wider use of HUMS as part of the airworthiness process by all parties. Aerossurance has been working on a 2 year HUMS Maintenance Credit Project for the UK Military Aviation Authority (MAA) since September 2014.

Among our past articles on HUMS/VHM are:

AINonline have published a report by Thierry Dubois on the symposium: EASA Rotorcraft Symposium Spurs New Safety Ideas We will return to cover other papers from the symposium in coming weeks.

Aerossurance is an Aberdeen based aviation consultancy with extensive HUMS and VHM experience.  For practical advice and support you can trust on HUMS and VHM, all aspects of helicopter airworthiness and aviation regulation, contact us at: enquiries@aerossurance.com