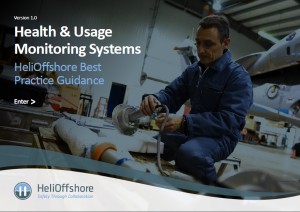 The main element of helicopter HUMS is Vibration Health Monitoring (VHM), designed to detect developing mechanical failures in safety critical transmission and rotor systems components.  HUMS first entered service in 1991 and made a major contribution to improving offshore helicopter safety.  While technology has advanced, HUMS remains a system that demands a high level of skill and careful management to achieve the maximum safety benefit.  The new document sets out the best practice for managing the use of HUMS.

The 41 page HUMS Best Practice Guide and a shorter Implementation Guide, are the result of more than 12 months of hard work and over twenty meetings between the HUMS specialists from CHC, Babcock, ERA, Bristow, PHI, Weststar, Cougar and Bell.  The team was lead by Russell Gould (Director, Global Fleet Support, Bristow Group) and Malcolm Garrington (Manager HUMS Support, CHC).

Aerossurance is delighted to have been invited to provide an input during the development process and comment on the final document.

The launch of HeliOffshore’s Health and Usage Monitoring System Best Practice is the result of a highly engaged industry putting momentum behind those actions that will make the greatest difference to safety.

We know that those at the frontline of our operations want to use these tools to their total achievable effectiveness and this guidance is applicable to all types of offshore helicopter operator. To achieve real safety improvement, we now need all operators to read and implement this guidance, dedicating resource to assess your current practice and, thereafter, to deliver improvements so that you are using HUMS according to global best practice.

Aerossurance thinks this is an excellent example of how HeliOffshore members are openly working together on global safety improvement and not settling on the lowest common denominator.  The document, written by HUMS subject matter experts, also sets out the detailed, practical expectations that intelligent oil and gas customers can use as the basis of their contractual requirements and assurance activity.

To further enhance this collaborative working and sharing of experiences, the organisation has also launched the “HeliOffshore Space”, an online collaboration tool for its members.  Haskins says:

Through HeliOffshore Space, we’re empowering our industry experts to collaborate to the benefit of everyone at the frontline and everyone who travels offshore.

HeliOffshore Space uses Jive software and is ideal for collaboration and knowledge sharing across multiple time zones.  It will also be a key means of helping HeliOffshore ensure products like the HUMS Best Practice Guide don’t stagnate but are subject to continuous improvement. The HUMS part of HeliOffshore Space will also be the natural online successor to the UK CAA’s Helicopter Health Monitoring Advisory Group HHMAG), that ran for 20 years from the mid-1980s.

As part of the launch a video on the HUMS Best Practice Guidance has been issued. 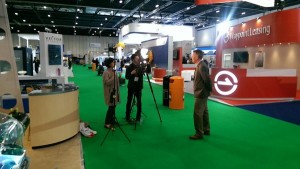 Andy Heather of Tonic Analytics Being Interviewed at Helitech by Melinda de Boer for the Launch Video (Credit: Andy Evans)

UPDATE 16 July 2016: The team who produced the HUMS Best Practice Guide have been nominated for the Sharing and Learning Award at the forthcoming Offshore Safety Awards 2016.

UPDATE 17 August 2016: We are delighted to report that, against stiff competition HeliOffshore won the Award for Sharing and Learning at the Offshore Safety Awards 2016:

… which recognises an individual/team or company that can demonstrate a learning and sharing culture either within their organisation, or who has made a significant contribution to health and safety through active participation in, or engagement with Oil & Gas UK or Step Change in Safety. 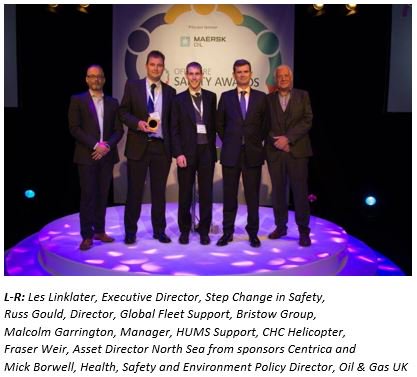 They note the launch of the HUMS Best Practice Guide and the Implementation Guide is:

HeliOffshore, founded in October 2014 by the 5 largest players in offshore helicopter operations (Babcock, Bristow, CHC, ERA and PHI), now has over 80 members, including Aerossurance.  The organisation has also just announced a strengthening of their secretariat supporting their various safety initiatives.

HUMS is one of just six safety priorities areas the organisation is currently working on.

We have reported on a number of HeliOffshore developments including recently:

Aerossurance Director Andy Evans is a former UK CAA former HUMS specialist, JAA Rotors and Transmission Specialist, Secretary of the Helicopter Health Monitoring Advisory Group (HHMAG) and line manager of HUMS at a major offshore helicopter operator.  Aerossurance has recently developed a HUMS improvement workshop for one overseas client, based on our proven experience with HUMS systems stretching back to 1997 (including the development and delivery of HUMS training for  UK CAA as far back as 2000 and a popular course delivered as part of the Heli-Expo Educational Programme from 2005 onwards).  Our improvement workshop approach applied our observations on the 70:20:10 model of learning.