Virgin Atlantic engineers at London Heathrow have come to the scheduled end of a 2 month trial of Sony SmartWear equipment.  The aim of this wearable technology is to aid communications between line maintenance engineers working remotely on aircraft and engineering support teams.

The line engineers were kitted out with Sony’s SmartWatch 3 and SmartEyeglass Developer Edition SED-E1 devices, alongside a smartphone or tablet. 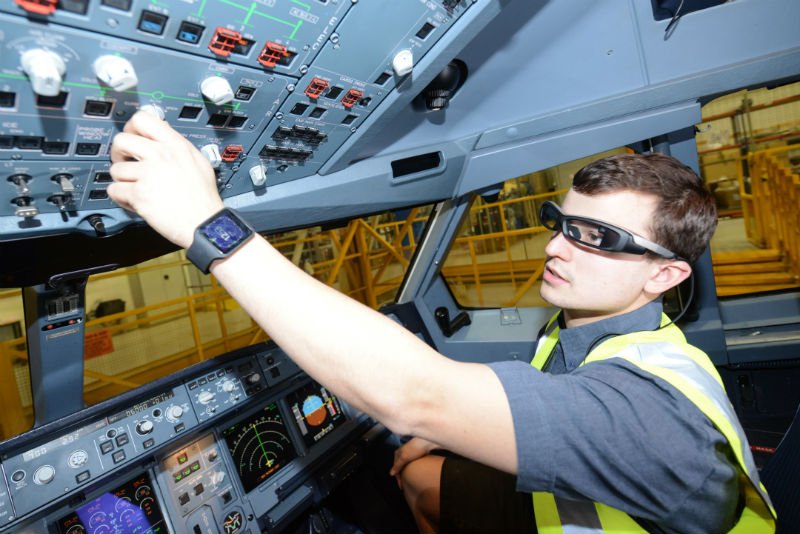 At the start of the trial Sony said:

Our SmartEyeglass Developer Edition SED-E1 will enable Virgin Atlantic to deliver rapid technical assistance by streaming real-time video directly from onsite engineers over to the technicians in the control room where they can view the content directly from the dedicated app. This will be supplemented by SmartWatch 3 acting as a non-stop activity log, providing runway bound engineers with on-the-go job allocations and detail changes whilst simultaneously providing managers with instant feedback on how they’re getting on.

Using Sony’s SmartWear alongside a smart phone or tablet will remove paper from some engineering processes and reduce the journey times between an aircraft and technical control. This will enable the engineers and technicians to remain on the aircraft during turnarounds – helping to save valuable time, as well as make a significant contribution to our targets to reduce paper waste.

It will be interesting to see if wearable technology proved a benefit or a distraction in this trial.  We are aware of similar trials at Easyjet with Epson Moverio BT-200 and of Japan Airlines testing Google Glass.  Easyjet’s Head of Engineering and Maintenance Ian Davies commented:

I have about fifty engineers monitoring everything going…every day but the most modern tool we’ve got to do that is a telephone and it comes down to snapshots and bits of conversations. So effectively we are solving problems semi-blind. We needed to be able to get eyes on the problem.

You would not believe how useful it is for us to be able to see the problem.  If someone calls me and says there’s a big dent in the side of the aircraft, how big is a big dent? Well you can see it straight away- literally within seconds I can say we’re in trouble or not.

Engineers are generally techie and they like playing with new kit, especially if it promises to make their job quicker and easier. But they’re also critical and expect things to work, so although we have that play element of experimenting at the beginning we’re pretty ruthless. When we first started with the video camera we said the resolution isn’t good enough so we upped the resolution, we said we needed to control it remotely from this end and now we’re able to control to control the shutter from the central operations end and exactly what we’re able to see.

IT consultancy Gartner predict that the entire wearable market will be worth $10 billion globally by 2016.

UPDATE 23 July 2015: The Australian national research lab, CSIRO, are developing wearable solutions for aircraft maintenance too.  It has licenced the Guardian Mentor Remote line to aerospace company TAE and is researching the technology for use in highly automated factory environments.  GMR includes the capability to superimpose the ‘hands’ of a remote expert on the head up display to aid communication and is supplemented by a 3D laser mapping tool.

UPDATE 3 August 2015: Airbus are also working on ‘the factory of the future’.  They are already using head-worn technology with in-built barcode readers on the A330 cabin furnishing line to give operators data on specific customer configurations.

The tool has transformed Airbus’ marking operations, which previously required highly-experienced operators to decipher complicated drawings, convert measurements between imperial and metric units, and prepare marking templates, while maintaining concentration for long periods of time during the highly-involved and physically-demanding task.

Following a quick development time after the project’s launch in January, the first prototype of the tool was available in February for initial testing and validation.

They also feature voice recognition, but programmed in English so as not to influence by normal conversation in French on the shop floor!

UPDATE 6 January 2016: Intel launches x-ray-like glasses that allow wearers to ‘see inside’ objects.  More details on the Daqri Smart Helmet are here and in these videos:

UPDATE 14 June 2016: The article The impact – and importance – of virtual and augmented reality in aviation discusses Optech4D’s 3-D visualisation and simulation technology to aid learning and says thay Boeing:

…conducted a study that revealed how trainees performed with and without the help of AR [Augmented Reality] technology when asked to assemble a mock wing for an aircraft manufacturer. One group of trainees was allowed to have a PDF on a computer to aid them in the assembly and another was given a tablet with the AR technology application. The study concluded that the group with the tablet performed 30 percent faster and was 90 percent more accurately than the group with only the PDF instructions.

The training room at the company’s Bordeaux facility is set up with 10 work stations where people can be trained simultaneously. An instructor sits at the top of the table, and retains overall controls of the virtual Falcon…with trainees using a computer that is hooked up to virtual reality goggles. A motion sensor at the side of the computer picks up hand movements, allowing students to access menus, as well as move around the aircraft.

When students first put on the goggle they are in a virtual world with a 3D model of a Falcon in front of them. Each section of the aircraft can be removed, allowing students to look in intricate details at each of the component parts of the aircraft. Whilst the instructor talks, he also has the opportunity to bring up photographs of individual parts so that students can see both the virtual and physical images of the parts they are looking at. 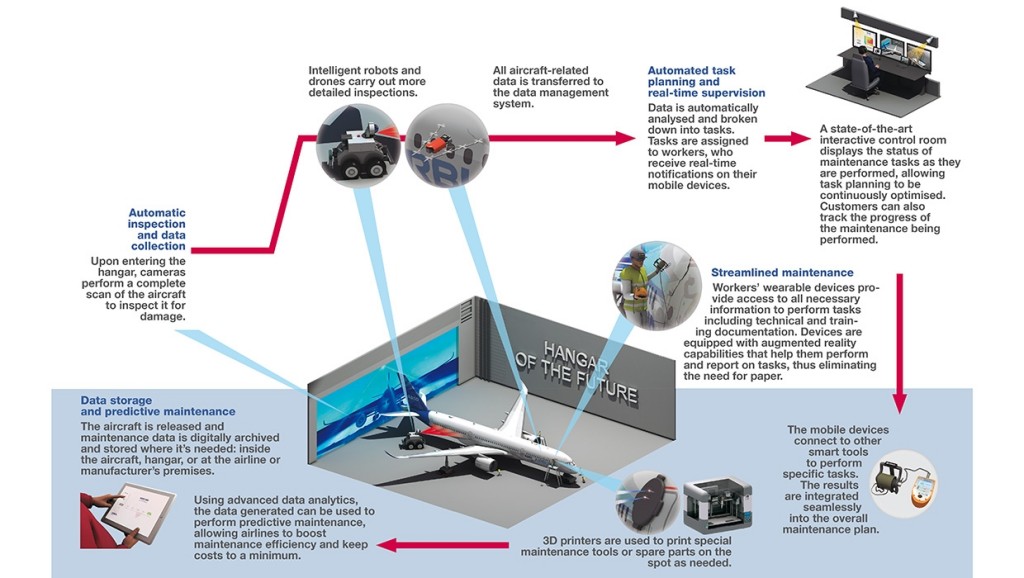 The original Glass designers had starry-eyed visions of masses blissfully living their lives in tandem with a wraparound frame and a tiny computer screen hovering over their eye. But the dream quickly gave way to disillusionment as early adopters found that it delivered less than it promised—and users became the target of shaming from outsiders concerned about privacy.

Now the focus was on making a practical workplace tool that saves time and money. Announced today, it is called Glass Enterprise Edition.

[A] pilot project, in GE’s Aviation Division, used EE with a wifi-enabled torque wrench: Glass tells workers whether they are using the proper amount of torque. Eighty-five percent of the workers said that the system would reduce errors. “By the end of this year, we’ll have several sites deploying this,” says Ted Robertson, an engineering manager at GE Aviation.

Half of manufacturers plan to adopt wearable tech by 2022. And 55% of current wearable tech users expect to expand their level of usage in the next five years.

Yet…almost half (49%) of manufacturers say the complexity of these technologies is a barrier to achieving a fully connected factory, in addition to budget constraints (43%) and integration with legacy systems (39%).

UPDATE 3 August 2017: DHL completes ‘smart glasses’ pilot programme in its warehouses in the US and Europe.

UPDATE 1 September 2017: Seeing a future for Google Glass 2.0? Now targeted at manufacturing and other enterprise uses, will Google Glass succeed second time around?

A challenge that Google, and indeed the industry at large, faces over the short term is price. Google’s initial sales of Glass EE to businesses were between $1,300 and $1,500 per unit. Although at around half the current cost of Microsoft’s HoloLens, this pricing is still a prohibitive factor for many…

UPDATE 16 September 2017: Baggage handlers at Changi airport are to use augmented reality (AR) glasses for faster, safer and more reliable loading of aircraft.

Installing electrical wiring on an aircraft is a complex task that leaves zero room for error. That’s why Boeing is testing augmented reality as a possible solution to give technicians real-time, hands-free, interactive 3D wiring diagrams – right before their eyes.

“A person working in an industrial setting has a lot of distractions in that environment and a lot of data to think about and process. Traditionally technicians had to look at and interpret a two-dimensional twenty-foot-long drawing and construct that image in their mind and attempt to wire based on this mental model,” said Brian Laughlin, IT Tech Fellow. “By using augmented reality technology, technicians can easily see where the electrical wiring goes in the aircraft fuselage. They can roam around the airplane and see the wiring renderings in full depth within their surroundings and access instructions hands-free.”

UPDATE 26 March 2018:  These AR Goggles Are Making Faster Fixes in Oil Fields Managing complicated repairs remotely saves Baker Hughes time and money.  Would beg questions of responsibility in aviation if certifying staff were being directed rather than supported by ‘experts’ remotely.

After a successful pilot, KLM E&M and NLR are now developing several maintenance training applications using Hololens AR goggles. The advantages have proven numerous, it makes training more attractive, more effective and more efficient. Trainees are actively involved in the instruction session, get a better insight into how the system works and are better able to put what they have learned into practice. And a virtual aircraft is available any place, any time.