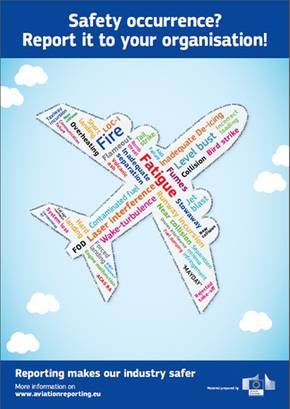 Previously Mandatory Occurrence Reporting (MOR) was effectively regulated by a Directive 2003/42/EC to each nation to create compatible national regulation. That directive is now superseded by a specific, directly applicable, EU-wide regulation: Regulation (EU) 376/2014 (and the associated Commission Regulations (EC) No 1321/2007 and (EC) No 1330/2007).  On 29 June 2015 Implementing Regulation (EU) 2015/1018 was also published, laying down a list classifying occurrences in civil aviation to be mandatorily reported. While some basic elements of the current MOR concept are maintained there are some key differences.  The European Aviation Safety Agency (EASA) commented in their Annual Safety Review:

Regulation (EU) 376/2014 is broader than just reporting of occurrences in civil aviation, including analysis and follow-up too.    In the regulation it is stated:

Experience has shown that accidents are often preceded by safety-related incidents and deficiencies revealing the existence of safety hazards. Safety information is therefore an important resource for the detection of potential safety hazards. In addition, whilst the ability to learn from an accident is crucial, purely reactive systems have been found to be of limited use in continuing to bring forward improvements. Reactive systems should therefore be complemented by proactive systems which use other types of safety information to make effective improvements in aviation safety. The Union, its Member States, the European Aviation Safety Agency (‘the Agency’) and organisations should contribute to the improvement of aviation safety through the introduction of more proactive and evidence based safety systems which focus on accident prevention based on the analysis of all relevant safety information, including information on civil aviation occurrences.

Various categories of staff working or otherwise engaged in civil aviation witness events which are of relevance to accident prevention. They should therefore have access to tools enabling them to report such events, and their protection should be guaranteed. In order to encourage staff to report occurrences and enable them to appreciate more fully the positive impact which occurrence reporting has on air safety, they should be regularly informed about action taken under occurrence reporting systems.

Encouragingly the European Commission have also recognised that:

The development of other means of collecting safety information in addition to the systems required by this Regulation should be encouraged, with a view to collecting further information which could contribute to the improvement of aviation safety.

Where organisations have existing and well-functioning safety information collection systems, they should be allowed to continue to use those systems alongside the systems to be established for the purpose of this Regulation.

Reports will ultimately be entered in the existing European Central Repository (ECR) which uses ECCAIRS software.  At the end of 2014 there was a total of 953,633 MORs in the ECR.  EASA note that:

The topic was discussed further by EASA at Helitech, at a seminar organised by the European Helicopter Association (EHA).  In that presentation EASA highlighted that safety reporting is simply the first step to safety improvement:

The presentation also included a summary of the ‘drumbeat’ of reporting:

EASA Rule Making Team RMT.0681 is currently working to align existing Implementing Rules and related AMC/GM with the subtle differences introduced.  The intention is issue a Notice of Proposed Amendment in late 2015 for public comment.

Pilots, owners and operators of Annex II aircraft, non-EASA certificated types such as microlights, vintage and ex military aircraft are not required to report under the new rules, but are nevertheless encouraged to do so.

However, in what is a retrograde step to safety promotion:

This appears based on a confusion between protecting reports, as required by the regulation, and using information from reports for legitimate safety promotion.

UPDATE 18 December 2015: The UK CAA have issued an Information Notice with a list of FAQs.

UPDATE 20 April 2016: NASA ASRS at 40 and the Continued Challenge of Timeliness for Safety Reporting

UPDATE 22 March 2017: Which difference do you want to make through leadership? (a presentation based on the work of Jim Kouzes and Barry Posner).  Note slide 6 in particular: 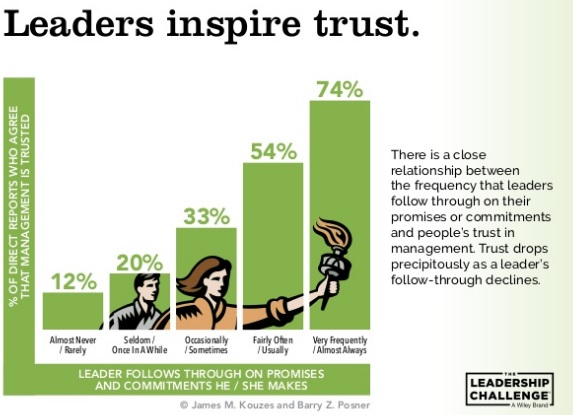 UPDATE 25 March 2017: In a commentary on the NHS annual staff survey, trust is emphasised again:

Developing a culture where quality and improvement are central to an organisation’s strategy requires high levels of trust, and trust that issues can be raised and dealt with as an opportunity for improvement. There is no doubt that without this learning culture, with trust as a central behaviour, errors and incidents will only increase.

UPDATE 7 November 2019: The European Commission has launched 12-week Open Public Consultation of the performance of Regulation (EU) No 376/2014.

The evaluation will assess whether and to what extent the Regulation has achieved its objectives and will identify possible issues and challenges affecting its application.The public consultation is part of the data gathering conducted in the context of the ex-post evaluation. It aims to capture the views of the widest possible spectrum of stakeholders on the questions related to the main evaluation criteria – relevance, effectiveness, efficiency and EU added value of the Regulation.

Aerossurance has extensive air safety, investigation and accident analysis experience.  For practical aviation advice you can trust, contact us at: enquiries@aerossurance.com