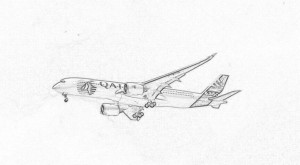 Composite materials make up more than 50 per cent of the A350 – the most to date for an Airbus aircraft:

ADS has produced this graphic that highlights the range of UK suppliers to the A350, including Airbus’ wing manufacturing facility at Broughton and Rolls-Royce in Derby who provide the Trent XWB, the sole engine available on the A350.  Rolls-Royce are ramping up development of higher thrust versions of the Trent XWB.

The final assembly in Toulouse is shown here:

The layout of first prototype, MSN01 is here:

However, it is the passenger experience that is one key selling point for the XWB:

Qatar Airways CEO says first A350 is just right.  This article identifies the slight delay in handover was due to Buyer Furnished Equipment (BFE).  Aerossurance has previously commented on the raid growth and related challenges facing the cabin furnishing sector.

As is usual, the aircraft has been flown on route proving flights.

The first was a polar flight to Iqaluit Airport in Northern Canada:

To date the A350XWB has won 780 orders from over 40 customers worldwide.  Fabrice Brégier, President and CEO of Airbus was interviewed by CNBC today.

UPDATE: Airbus are planning to ramp up to 10 aircraft per month by 2018.

UPDATE: Flying On The Qatar Airways A350 On The First Commercial Service, As Newest Airbus Debuts

Aerossurance has extensive air safety, aircraft certification, airworthiness and aircraft introduction to service experience. For practical aviation advice you can trust, contact us at: enquiries@aerossurance.com